Tobacco and accessory sales make up approximately 94 percent of Straus Tobacconist’s annual sales, of which cigar sales compose 75 percent. Like all the old-time tobacco shops across the nation, Straus built its legacy on pipe and pipe tobacco sales, and Clark remains committed to serving his pipe customers, though he serves far more cigar smokers these days.

A popular pipe brand at Straus is HIS by Phillips & King, which sells for approximately $40. Clark is comfortable selling pipes in that range up to $150 but finds that more expensive pipes don’t sell well at his locations.

“The internet has become a major force in discounting high-end pipes,” he says. “It’s hard to get into the handmade high-end stuff. We don’t get too much into that range.”

Straus Tobacconist sells bulk tobaccos by Lane Limited, Peter Stokkebye and Sutliff. The downtown location doesn’t do too much in the way of tinned tobaccos, but the Florence location has become a haven for the area’s pipe smokers, with three cases devoted to pipes and a full selection of both bulk and tinned tobaccos. 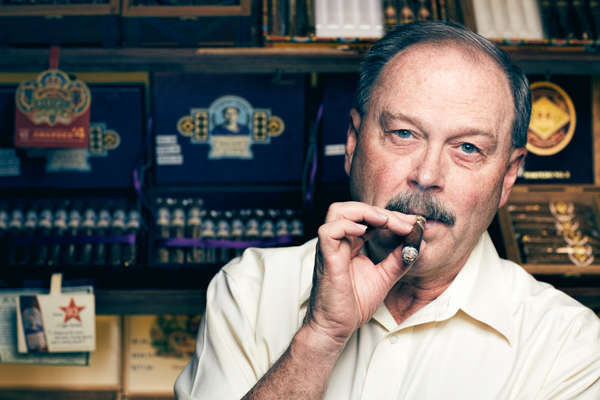 “They’ve been able to create a nice pipe following in Florence, while this store has always been more focused on cigars,” Clark explains.

While one store may be more focused on cigars and the other has a larger pipe contingent, they both share top-notch customer service.

“You just got to take care of your customers,” Clark simply states. “If you take care of your customer and he’s happy, he will probably tell a person or two about his experience at your store. If you have an upset customer, he tells everybody he knows—neighbors, family and friends. That stuff spreads like wildfire. He makes a point to tell anybody about the bad service he’s had. So we make it a point that we’re predominantly known for excellent customer service. We make sure we have the right type of people staffing the store—knowledgeable and friendly.”

Between the two locations, Clark employs eight people. While he spends most of his time in the downtown store, he relies heavily on Grant Smyrlakis, who has been in the cigar industry for most of his life, to manage the shop when he is away. For the Florence location, he has Matt Gallaher overseeing the store.

“They’re the type of people I want to find to work here,” Clark says. “Someone who has the knowledge and passion to be able to explain the difference between a natural and maduro wrapper, or Honduran and Nicaraguan cigar. They’re enthusiastic about the products, and the customers pick up on that enthusiasm. It makes coming to one of the stores more than just a shopping experience.”

Clearly, Cincinnati area premium tobacco fans have enjoyed a luxury of rich experiences at Straus for more than a century, and Clark is fighting desperately to protect the privilege of serving those customers. As president of the Ohio Premium Cigar & Pipe Association, he successfully led the fight against a recent proposal to raise Ohio’s Other Tobacco Products tax to 51 percent from 17 percent. An articulate and passionate speaker, he has traveled to Washington, D.C., several times with the IPCPR to discuss protecting the premium cigar industry from FDA oversight. He’s a heavy lifter in the struggle to ensure that the retail premium tobacco trade remains a viable and profitable enterprise. He describes himself as a generally positive person, but when he considers what the future may hold for his business and countless hundreds like it across the nation he sometimes shudders.

“You have to plan very carefully for the future,” he says. “This onslaught that’s coming in the next three years can have a terrible toll on our industry, and it could very well drive all of the small independent businesses out of it. I do think we can live with the FDA in our industry so long as they’re willing to learn that we’re different from cigarette shops and convenience stores. You have to be 18 to walk into my store. Kids are not buying from us. If the FDA is willing to allow us to educate them about our industry, then I think we’ll be alright. If not, then we’ll have some very big problems that might be impossible to overcome. That would change the entire dynamic of our industry.”

Ever the optimist, Clark remains hopeful that FDA oversight won’t be as bad as it might presently seem. He continues to love this industry and plans to stick around for another 10 years or so when he hopes he can hand the store over to someone who loves Straus Tobacconist as much as he does.

“I really don’t see myself as the owner of Straus,” he concludes. “I’m just taking care of it. While I have it today, it’s not really mine. It belongs to the customers. I’m just trying to keep the legacy alive to pass it along to the next person who will love it like I do.”

This story first appeared in the September/October 2016 issue of Tobacconist magazine.

– Contributed by Stephen A. Ross