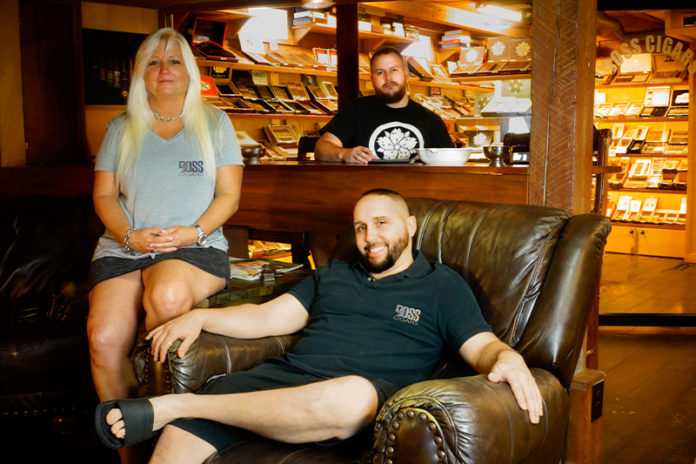 Corinto “Cory” Talanca never considered himself a big fan of tobacco while he was growing up. He never smoked cigarettes; he never dipped, despite being an avid baseball player; and he had no plans to build his entire career around selling tobacco products. Fast forward to 2014, and Talanca became a tobacconist as the co-owner of Boss Cigars, a cigar store located in Carrollton, Georgia. In the past six years, this unlikely tobacco retailer has built a unique business from doing things differently, taking Boss Cigars from being just another typical cigar store and lounge to becoming a brand with a following far outside the borders of Georgia. 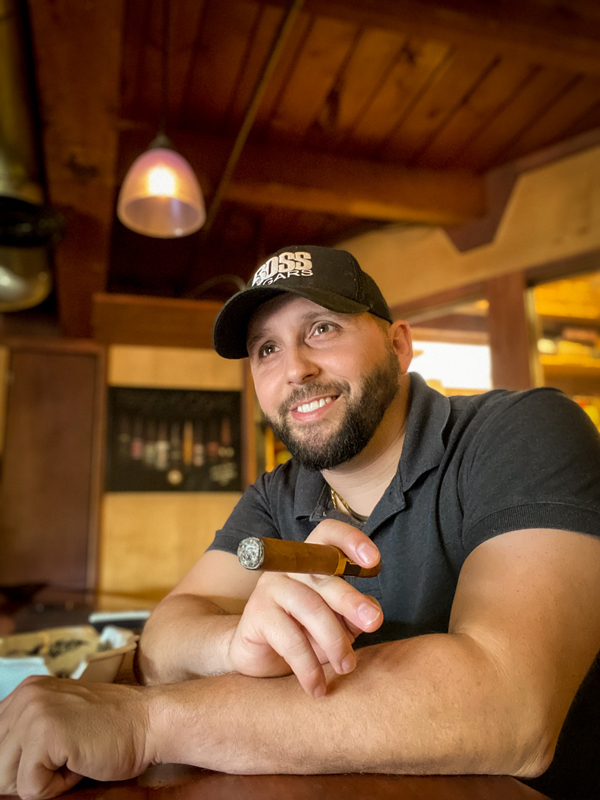 Talanca grew up in Pasadena, California. He remembers seeing his father spend hours in their family’s backyard, puffing on a cigar as he worked on different cars. He idolized his father, so like many sons, he wanted to do everything he saw his father do—including smoke cigars. When he was 16 years old, his father gave him the chance to have his first stogie, but the experience did not go as planned. In fact, the experience went so poorly that Talanca swore off cigars and vowed to never smoke another one again.

It wasn’t until he was in college that he broke that vow, invited by classmates to join them for a cigar between classes. Talanca reluctantly gave cigars another try and lit up an Arturo Fuente Hemingway, which turned his view of cigars on its head. This experience, unlike the one he had as a teen, was a positive one and sparked a new mindset for him. Following college, he had an on-again, off-again relationship with cigars but found himself in a cigar store as an electrical service technician for a wiring job. After completing the job, the cigar store owner asked him if he wanted to work in the store part time. His father had always urged him to have a backup plan, so he took on the part-time position, which opened his eyes to a future in tobacco retail that he hadn’t originally envisioned.

“I started working at one cigar store and was soon bouncing between two different shops at night,” Talanca explains. “That’s probably when I really fell in love with it. That’s probably where my appreciation for tobacco kind of took off as far as really enjoying cigars.”

As many professionals in the cigar industry can attest to, working in retail taught Talanca both what to do and what not to do in terms of being a good tobacconist. Working in one particular store gave Talanca what he refers to as a “first-class degree” in how not to run a tobacco store. He began to get an idea about what worked in terms of tobacco retail. When that store closed down, Talanca met his business partner, Ann Strickland, and at the urging of friends, he began to consider opening his own store. In 2014, the two took a leap into true entrepreneurship and opened Boss Cigars.

Timely Commitments
For many cigar enthusiasts, there is a certain romance surrounding the idea of having one’s own cigar lounge, but as Talanca found out, there are major time and financial commitments associated with being a tobacconist that many don’t plan for. Once he decided to open his own store, Talanca stopped doing electrical work and devoted all of his time to building his retail business. Prior to Boss Cigars, Carrollton only had one other cigar shop, and it had shut down in 2013. Talanca knew he faced a challenge in gaining traction and customers in the area he had selected to launch Boss Cigars. Already in this part of the city was West Georgia College, a wire manufacturing facility, and numerous golf courses—all full of potential customers for his new business.

When it came to settling on a location for Boss Cigars, Talanca thought back to one of the previous stores he had worked in and the building he often looked at through that store’s front windows each day. Across the street from his former employer’s shop was a building that looked like a log cabin, a unique structure in the city. Talanca and Strickland considered the building for their cigar store, even though only part of it was available for lease.

“The place had a nice covered porch, and we fell in love with it really quick,” Talanca says. “Before, this place was a little hair salon, so the walls were all painted gray, and it had weird fixtures. We started visualizing how we could tear it down and get it back to its nice, rustic, homey feel. The realtor gave us a price, and we came up with our business plan and decided to shoot for it.”

Talanca and Strickland were all in—and they were also on their own. There were no formal investors, so they used their own money and accepted some help from family members. There was also the biggest challenge: How would they gain customers? Their store was located on the back side of the log cabin because the front of the building housed an insurance company. Talanca and Strickland immediately set out to build some exposure for Boss Cigars. They ran advertisements in local newspapers, and they also used Facebook to grow an online following. Talanca, who wasn’t accustomed to using social media platforms like Facebook and Instagram for business, had to learn how to use each one quickly in order to reach potential new customers for the new store.

“You have to try a lot of things, and you’ve got to be proactive too,” Talanca explains. “We tried to do what we could, but this thing became more of a time issue. I think a lot of people need to understand this, especially if you don’t have a crew or managers going into this thing. This was a seven-day gig, and I mean, I worked from 10 a.m. till 8 p.m. on the weekends, which probably was more like until 9 p.m., maybe 10 p.m., on many nights. So, you’re talking anywhere from 80 to 90 something hours a week—grueling hours, just constant.

“It’s a heavy-ended commitment, and it took probably three years of nonstop ‘go, go, go’ to get any traction. I feel it was probably year three when we started really seeing a movement in our shop. You should know it’s going to take a lot, and you’ve got to be motivated. You’ve got to believe in your brand and believe in what you’re doing.”

He’s yet to find the best medium with which to market his business. Talanca has advertised in newspapers, put out local flyers, used email marketing and social media, and he is even considering branching out into radio advertisements. He also looks toward other retailers, such as Two Guys Smoke Shop’s David Garofalo, who authored David vs. Goliath: How to Compete, And Beat, The On-Line Giant, for ideas and guidance, but Talanca says that all ideas must but adapted to one’s own store in order to be effective. When it comes to customer acquisition, simply trying new things and mediums has been the best approach.

In addition to the time commitment, Talanca says that his biggest challenge in building his business was finding the right employees. As part owner, he had a shared vision of what Boss Cigars would eventually become. Finding staff that understood his and Strickland’s vision and who were willing to follow in their footsteps was—and remains—a challenge, even though he did find a great general manager with the hiring of Gabriel Hutcheson.

“I get real picky when it comes to staffing,” Talanca explains. “I don’t think one person can totally destroy a business, but they need to understand where we’re going and how to treat people, how to interact with customers and be willing to learn about the products we carry.”