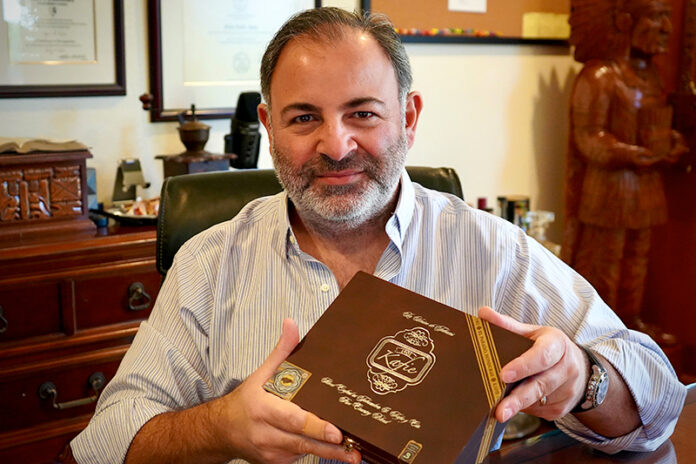 At the height of Dr. Gaby Kafie’s career, things unexpectedly came to a screeching halt. It was 2007, and Kafie found himself in a bit of a role reversal—the doctor had become the patient, and the prognosis was not good. He was diagnosed with a very rare eye condition known as central serous chorioretinopathy. For most people, this diagnosis usually only affects one eye and the condition is temporary. Kafie, however, was diagnosed with bilateral ocular disease and was suffering from the chronic form of the disease. This meant the career he had enjoyed and worked so hard for was coming to an end much earlier than he would have ever expected it to.

“This derailed my medical career, which was the only thing I loved with regards to professions,” he says. “I spent the first 40 years of my life dedicated toward becoming a doctor and being a doctor. I’ll never forget the day when my ophthalmologist told me that he could not give me medical clearance to go back to work. My life as a trained foot and ankle surgeon came to an immediate halt.”

At the time he was 38 years old and spending a lot of time at home with his family. It took nearly three years for him to find a new passion, which turned out to be cigars. While he had been a casual cigar smoker before, he now had more time to delve into the specifics of the cigar world, including the different types of tobaccos, the different factories that made cigars and how they create blends. It wasn’t until 2013, when he was 41 years old that he decided to take that next step and turn cigars into a full-time business.

“I’ve always had this belief that if you are going to do something and be the best, you’ve got to dedicate your life to that one single passion,” he says. “That’s why I tell everyone premium cigars saved my life. The business and culture of premium cigars gave me purpose. I found a way to connect what I love—my family—with another great love of mine: premium cigars. The fact that this industry is so welcoming to newcomers is what inspires me to create new, timeless blends while at the same time helping others enter the business. Each day I wake up excited about being in the industry. I love every aspect of it, especially the people. I’ve been really blessed to work with the finest.”

That’s only part of Kafie’s story. To truly understand why he got into the cigar industry and what inspired his namesake brand, you have to first become familiar with his family history. His parents constantly looked for the perfect place to raise their family and wanted their children to be able to attend the best schools. When he was young, Kafie’s family moved from Honduras to Spain, then to Jordan before they eventually made their way to Southern California when he was 6 years old. 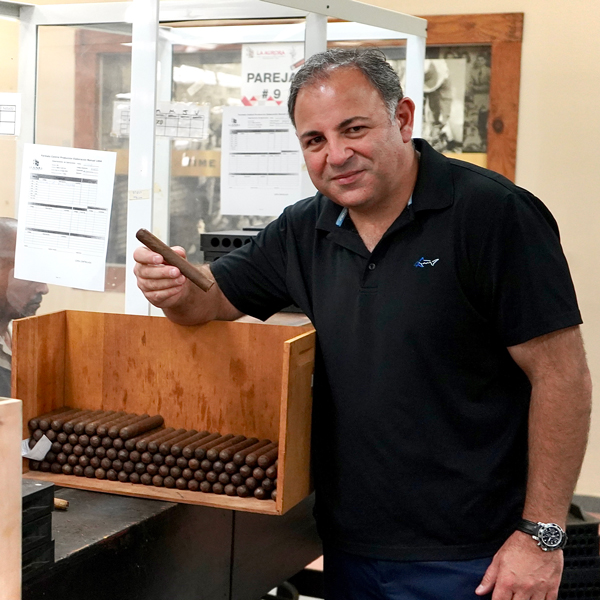 “I am the middle child of three,” Kafie says. “My older brother Fernando Jr. wanted to become a doctor, and I followed in his footsteps as he was and still is a great mentor of mine. My sister Tiffany studied business management and lives in Honduras where she is married to a doctor. You could say we’re a family of doctors. Kafie family members by nature are all overachievers and very eccentric. We tend not to compete with others; rather, [we] find weaknesses within ourselves that we strive to overcome.”

Kafie was a big sports fan and played several of them in his youth. Because of this, Kafie wanted to study medicine and specialize in a field that would allow him to work closely with athletes. With years of hard work, Kafie fulfilled his childhood dream. Kafie did indeed become a doctor and specialized in podiatric orthopedics, foot and ankle surgery, sports medicine, and wound care. Even though he no longer practices medicine, he maintains an active medical license, something he says he does so that his children will always value proper education.

“I will always be a doctor, whether I am working with patients or not,” he says. “I love the education I received and cherish it with all my heart. Everything we master in life starts with education, and the same goes for becoming a great cigar maker, company and brand owner.”

Kafie has smoked cigars since he was 18 years old, and they figured prominently into his downtime, such as the time he spent as a big-game offshore fisherman. When his medical career came to an end, cigars seemed like the next passion for him to pursue. The more he studied and educated himself on everything related to cigars, the clearer an opportunity came into view.

“I felt there was room for a brand that would represent our family and my personal story in life,” he explains. “I knew that this venture would take years; however, I knew without a doubt I wanted to spend the rest of my life building a family cigar business. Without hesitation, I flew to Honduras and went to visit the best cigar maker in the country: Rolando Reyes Sr. This is the man that everyone wanted to learn from.”

Kafie traveled to Tabacalera Puros Aliados, where he met the late Rolando Reyes Sr. Reyes was the owner and maker of several brands, including Cuba Aliados, Puros Indios and Cienfuegos (brands now owned by Oliva Cigar Company). Kafie’s family had roots in Central America and Honduras, so he wasn’t entirely unfamiliar with tobacco and the very traditional cigar industry. Just as he had done with his medical career, Kafie looked toward the Reyes family for education and hands-on experience.

“This industry is about learning from the best,” he says. “Going back in time, the Reyes family was at the top of their game. Also, being in Honduras gave me the opportunity to connect once again with my native country and the people of Honduras. At the time, I had this deep desire to bring the best of Honduras’ tobacco culture forward and shed some light on the country once again.”

When his pseudo apprenticeship was over, Kafie was ready to start building his own cigar brand. The inspiration behind Kafie 1901 Cigars came from the love he has for his family and its deep roots in Honduras. He describes his grandfather, Don Chucri Kafie, as being “a fearless entrepreneur who believed in Central America, Honduras and family” and his grandmother, Doña Regina Kafie, as being responsible for overseeing her family of 12 in the city of Tegucigalpa, Honduras. Kafie’s grandparents have passed, as have all of their children, leaving behind the third and fourth generations of the family to carry on their story and traditions. One way that they do this is by investing in different businesses in Central America and Honduras with the hope that their contributions will help make the region and countries within it thrive and become a better place for locals to live and work.

“My inspiration to create the brand Kafie 1901 was to develop a romantic connection between the soil of the region and our ancestors,” he says. “I feel in my heart and soul that the Kafie family represents a very special group of individuals to the region, and I felt a premium cigar brand would honor our family in the highest forms as premium cigars usually attract quality people in search of quality experiences.”

Kafie Cigars was founded in 2013 with the business goal of creating highly memorable experiences for cigar and coffee connoisseurs around the world. Kafie Cigars represented the Kafie family, its history in Honduras and Dr. Gaby Kafie as a person.

The Dream Blend
Over the course of nine years, Dr. Kafie has worked diligently to build his premium cigar brand. He opened and ran his own cigar factory, Tabacalera G. Kafie y Cia., in Danlí, Honduras. He also developed four different blends to expand his brand. The Don Fernando Maduro Collection was created using a 5-6-year-aged Cuban Seed Habano wrapper that was grown in Nicaragua. This blend is what Kafie often referred to as being the foundation of the Kafie 1901 Cigars lineup.

The Kafie 1901 Connecticut took nine months to create due to the inability to find a suitable wrapper. This medium-bodied cigar has a shade-grown wrapper from Ecuador, and its binder contains tobaccos from three different countries. The Kafie 1901 Sumatra’s wrapper was sun-grown in Ecuador and consists of long-filler tobacco from Honduras, the Dominican Republic, Ecuador and Nicaragua. Kafie explains that it’s the Cuban seed Habano binder that gives this blend the balance that today’s cigar smokers are looking for. The Kafie 1901 San Andres has tobaccos from five different countries. This box-pressed cigar is among the strongest in Kafie Cigars’ portfolio and is a blend fit for festive, celebratory occasions. 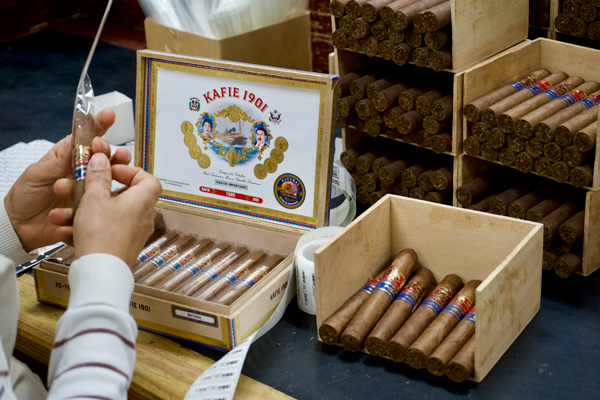 Each blend was developed with the end goal of Kafie Cigars being able to offer cigar smokers with a wheelhouse of flavors that they would enjoy. Variety was key, and thus Kafie never wanted to stick with just one particular type of tobacco or cigar blend.
“We wanted to cover the spectrum from light to medium to full-bodied cigars,” he says. “Over the past eight years, we have only developed five premium cigars in the Kafie 1901 Core line, the fifth being our Kafie 1901 Serie L Natural, which will be making its debut in the weeks to come.”

The fifth blend presented the biggest challenge to Kafie and also sparked one of the biggest changes in his company. By 2019, Kafie began experiencing issues that stemmed from his business being based in Honduras. That year, he started working on a blend that he was never able to finish because he didn’t have the right tobacco. He wanted to create a cigar that was entirely made of Dominican-grown tobacco. Kafie felt a puro was what his company needed, but natural disasters like hurricanes and supply chain issues caused by the pandemic prevented him from creating what he envisioned as his “dream blend.”

“I was missing a quality natural shade wrapper to complete the blend I was trying to build,” he says. “From 2017 to 2020, our company was producing top-quality premium cigars in Honduras, three of which were nominated for best value cigar, best Honduran cigar and best brand-Honduras by Cigar Journal magazine. In light of coming short from winning, we were really doing good work at the time, and our reputation for producing quality cigars was spreading. However, in late 2019 and in 2020, Honduras was devastated by two major hurricanes, and to this day Honduras is still feeling the after-effects of the pandemic. Forces out of my control made it so that if we wanted to continue to produce a variety of quality premium blends we needed to look elsewhere for tobacco.”