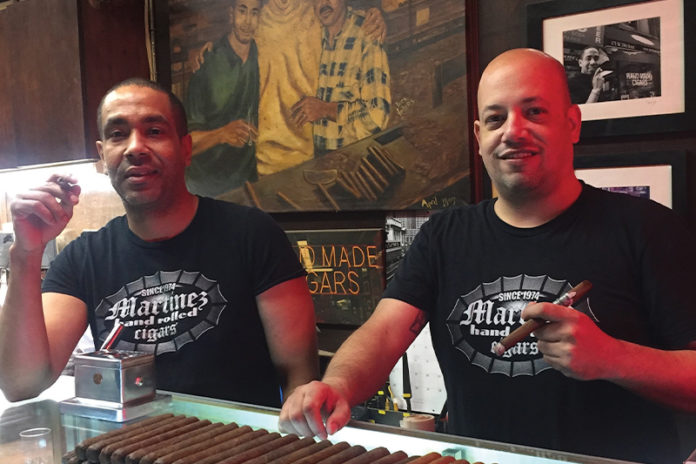 Forty-six years ago, Antonio Martinez bought into the American dream. The former cigar roller from Tamboril, Dominican Republic, had immigrated to New York City in the early 1970s, and by 1974, he had amassed enough capital to open a small cigar shop at 7th Avenue and 29th Street, near the city’s famed Penn Station. Rather than sell cigars made by others, Antonio’s business made its own cigars and became known as The Martinez Hand-Rolled Cigars Factory.

At the time of establishing his business, the neighborhood that Antonio chose was largely industrial and filled with factories and warehouses because of its proximity to Penn Station. Using connections from his homeland, Antonio bought tobacco, prepared it and rolled it into thousands of cigars each year. Antonio’s cigars became a popular choice among members of the area’s working class who liked to stop into The Martinez Hand-Rolled Cigars Factory to get a taste of the Tamboril experience in the heart of Manhattan while they chose cigars to take home and enjoy.

By the 1980s, business had grown brisk enough that Antonio hired a few of his compatriots to help him roll more cigars, and his son, Jesus, began working at the store too. In the 1990s, The Martinez Hand-Rolled Cigars Factory grew even larger and briefly added a second location to roll even more cigars as the Cigar Boom was at its height, yet a few years later, the Martinez family closed the second operation to remain focused on its original store. In 2002, Antonio died, and Jesus took over ownership of The Martinez Hand-Rolled Cigars Factory. 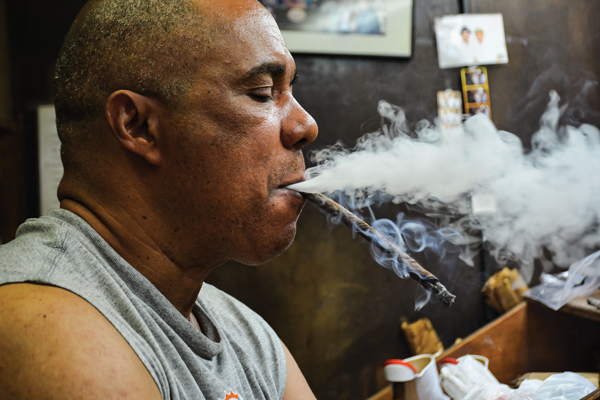 While the original store and its unique Dominican atmosphere has remained untouched, the neighborhood around it has changed dramatically. Largely industrial-based when Antonio first opened The Martinez Hand-Rolled Cigars Factory, the neighborhood has slowly evolved as gentrification transformed those old factories and warehouses in the area into condominiums, apartments, townhouses, hotels and restaurants. The store’s clientele has changed just as much as the neighborhood in which it’s located. Originally consisting of only locals who lived and worked nearby, The Martinez Hand-Rolled Cigars Factory is now seeing a good mix of tourists entering the store. These folks come in to check out the time-honored cigarmaking traditions at The Martinez Hand-Rolled Cigars Factory, talk to the rollers, sample the cigars and make their purchases. “We’re the Brooklyn Brewery of cigars,” Jesus explains. “People come in, get to experience what we do and leave with the product.”

Often, once those tourists return home from their visit to New York City, they give The Martinez Hand-Rolled Cigars Factory a call or check out its website to purchase more cigars. A few of those tourist customers have even convinced their local brick-and-mortar shop owners to carry the company’s cigars. Without even trying, Jesus had established a small wholesale division to The Martinez Hand-Rolled Cigars Factory. “What might I achieve for the business if I really marketed the cigars to other retailers?” he asked. Well, 2020—until the Covid-19 pandemic arrived—is the year he’s beginning to find out.

“We get a lot of tourists trying our product when they’re in New York City, and then they order it from us online,” Jesus says. “That’s why we thought we could sell our cigars to other retailers across the country. We have only been doing it for a little while, but we have had a lot of people visit the shop and get cigars, and then they go home and they ask their retailers about bringing the cigars in. They want it more regularly. Enough people were asking their retailers to carry our cigars that we saw an opportunity to expand the brand. The more we do it, the more people want it.”

Expanding His Father’s Dream
By the time Jesus joined The Martinez Hand-Rolled Cigars Factory in the 1980s, his father had established two cigar lines—Don Antonio and New York City Blend—both of which used primarily Dominican tobacco. Rather than expand his business’s offerings, Antonio wanted only to make those two cigar lines the best he could. With his established business ties to tobacco growers in the Dominican Republic, Antonio obtained enough high-quality fermented and aged leaf to make his cigars consistently year after year.

“My father taught me quality over quantity,” Jesus explains. “Be on top of the quality. If you keep that, you will have a business for life. That comes from the tobacco. We get the best tobacco available to us. Then, the rollers—every one of them has been with us for more than 20 years. They have a passion for the work and for the store. They always do the right thing. They are proud, and you can see it in their work. The quality of our ingredients and the quality of our production techniques equate to quality in all of our cigars.”

These cigars are medium-bodied and offer earthy and slightly nutty flavor notes. The New York City Blend Double Corona (6 x 65) is the only variant in the line that is made with a maduro wrapper, and the cigar offers leathery and spicy notes. All New York City Blend cigars are available in five-packs and 25-count boxes.

By the early 2000s, however, cigar smokers’ flavor and strength profiles shifted to favoring stronger and more robust cigars. No matter how well-made The Martinez Hand-Rolled Cigars Factory products were, its customers’ changing tastes could have meant they shopped elsewhere if the Martinez family didn’t shift as well to meet the demand.

“The key is to listen to the customer,” Jesus says. “You get a lot of suggestions from them. A customer suggested to us to do something with Nicaraguan tobacco. We tried a couple of things. At the beginning, the first Nicaraguan tobacco that we got our hands on wasn’t cured properly, and it was very peppery, so we stayed away from it for a couple of years before more customers demanded it. We tried it again and realized that the tobacco was much better than the first time.”