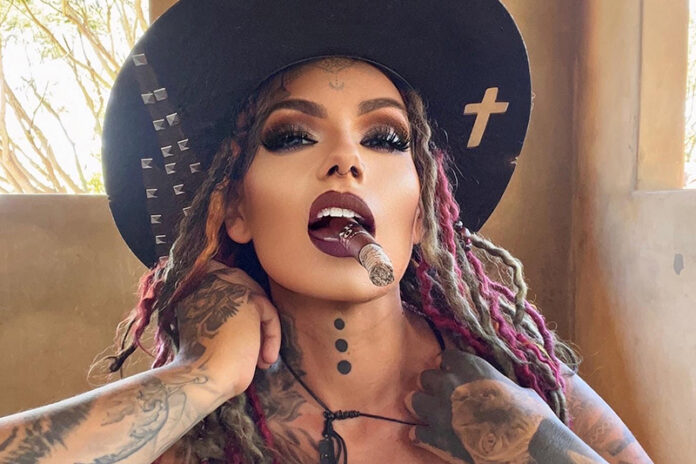 It was in the final days of 2021 when it was announced that Joshua and Cynn Coburn would be taking over as the owners of Dissident Cigars. Dissident Cigars has undergone several changes in ownership since its launch in 2013. The brand itself has earned a reputation for its alternative and edgy marketing. While some brands strive to be more traditional with the use of gold, red and regal colors, Dissident leans more into street art and attitude. The logo is a distressed font that looks more spray-painted than it is written, and instead of a family crest, there’s a big, bold lightning bolt that’s front and center in some of the company’s marketing collateral. The color scheme is also darker; red, black and white are typically the only colors used in the cigar’s packaging and band artwork.

It’s clear that Dissident is a brand for a new generation of cigar smokers, and that was part of the appeal for the Coburns when they were presented with the opportunity to become the brand’s newest owners. Prior to purchasing Dissident, the Coburns were serial entrepreneurs who had made a name for themselves as motivational speakers. Before becoming the owners of their own brand, many in the cigar industry knew the Coburns for their branding and marketing skills and services. With their experience working with cigars, the Coburns saw Dissident as a new challenge they wanted to take on. Dissident wasn’t a new brand, so they knew they had an entirely different set of obstacles and challenges ahead of them. Retailers knew of Dissident, but the various changes in ownership over the years left some with questions and doubts that the Coburns had to address. For consumers, Dissident was a boutique brand they were already smoking, but the question was how would the Coburns expand on what had already been released?

The Coburns bought the brand knowing it was going to be an investment in their time, money and resources and wouldn’t necessarily be a money-maker. This realization would scare many buyers off, but for the Coburns—who’ve launched and operated plenty of successful businesses—they realized they had a passion for cigars that would outweigh many of the reasons not to get involved in the cigar industry.

In the story that follows, the Coburns share how their work to motivate and help people in general led them to Nicaragua and the world of cigars—and the ultimate non-monetary perk of launching a premium cigar business today.

The Motivational Path to Cigars
Before they took the reins at Dissident cigars, Joshua and Cynn Coburn’s professional lives were built around helping people. Cynn spent a number of years running a facility for at-risk boys. Here, she helped rehabilitate troubled youth and made sure they were ready to reintegrate with society after their two-year stay in her facility. She later worked with the elderly, both through a law firm and through elderly care.

“From kids to adults, I’ve just tried to make sure that everybody feels loved,” she explains. “My husband is a motivational speaker; he did that for 20 years. I jumped into that with him for the last couple years.”

It was during a family vacation to Nicaragua that the Coburns unexpectedly stumbled into yet another industry and profession. The Coburns had traveled to Nicaragua to visit Oveja Negra, the cigar factory owned and operated by James and Angela Brown. The Coburns fell in love with Estelí and San Juan del Sur, a town situated on Nicaragua’s southwest coast where the Browns live. COVID-19 changed their plans slightly and turned what was meant to be a vacation into more of an extended stay and later into a complete relocation.

The Coburns’ children asked their parents to consider moving to Nicaragua permanently. Taken aback, the Coburns didn’t object to the suggestion. Instead, they challenged their children to do more research on what a move to Nicaragua would involve and whether it was something the family really should consider. After a month, the kids were still pushing for a move to Nicaragua. The Coburns sold everything they had, including their cars and personal belongings, packed a suitcase and their pets, and made Nicaragua their new home.

Moving to Nicaragua led to additional discoveries and revelations. The first realization was that, although the world knows Nicaragua for its cigar manufacturing capabilities, there really is no cigar culture or lifestyle within the country as one would suspect. It’s very hard to find cigars in Nicaragua because everything that’s made within the country is in turn exported out, Cynn Coburn explains. The Coburns were able to remedy that problem with their connection to the Browns and their factory. The more time the Coburns spent with the Browns and at Oveja Negra, the more immersed in the world of cigars they became.

One of the brands manufactured at Oveja Negra was Dissident Cigars, a premium cigar brand first launched in 2013. The brand had undergone several changes in ownership, and in 2021 it was once again on the market and in need of new owners. The Browns asked the Coburns if they wanted to purchase the brand and make it their own. It took about a week of deliberations and discussions before the Coburns finally decided that becoming cigar brand owners was indeed something they wanted to do.

The Coburns’ temporarily put their motivational speaking business aside to focus on Dissident. It was not uncommon for the Coburns to speak to audiences of 15,000, which was very demanding in terms of time and energy but also very rewarding. Even though making cigars requires a different set of skills than being a motivational speaker, the Coburns realized they could blend some of their past professional experiences into their new business venture. The Coburns’ new audiences were now those they encountered in cigar lounges while traveling and promoting Dissident. 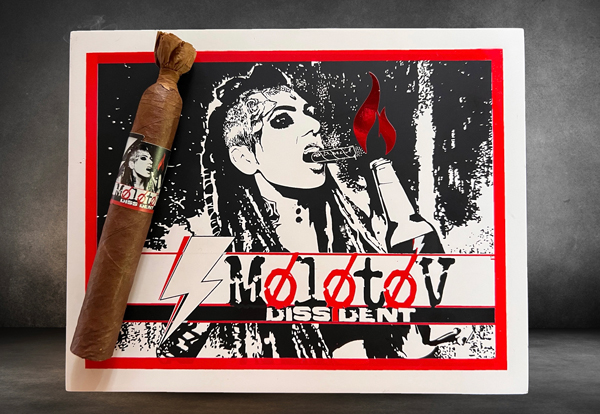 The Good Dissident
People have been at the heart of much of what the Coburns have done professionally, and the shift to cigars didn’t change that. Cynn understood early on the role cigars played in bringing people together. She also recognized the potential Dissident had in building a community within the cigar lifestyle. Cynn doesn’t put a lot of attention on how big her online following is, but both Joshua and Cynn use social media to engage with the cigar community, as well as to give people a glimpse into their lives not just as brand owners but as ordinary people. Social media allows for connection, which ultimately generates interest in the Coburns and their business ventures, like Dissident.

“I think it’s vital for me to be as real as possible out there, no matter what I’m doing,” Cynn explains. “If I’m going through hardships while I’m going to a business trip or to an event, I’m going to talk about how I’m pushing through, and hopefully I still end up helping somebody.”

After everything was approved and finalized, the Coburns realized social media would play a big role in how they promoted Dissident and its various products. One of the earliest discussions the couple had was over the definition of Dissident and what they wanted their iteration of the brand to mean to others.

“‘Dissident’ can mean a lot of things to people, and ultimately your first thought can be that of a negative one. To a lot of people [dissident] means opposition in a negative way, starting wars and hate, but it’s not. It’s about being true to yourself and standing up for what you believe in, and in our eyes it’s about acceptance because obviously that’s something that the world struggles with. So acceptance, love, pushing through and positivity—those are all of the things that need to be shown more,” Cynn says.

She continues, “That’s really what we’re focusing on: showing Dissident in a positive light and that it’s OK to be yourself and it’s OK to be one-of-a-kind. You don’t need to fit into this cookie-cutter world. It’s actually awesome to be yourself; people will love you for that in the end. I mean, look at the way I look: I have yet to come across someone that’s been a complete turd to me. Everyone’s been great. In the end, when you’re a good person, that’s what matters.”

The transition from consumer to brand owner wasn’t as hard as one would expect, Cynn states. There were, and still are, days that are more overwhelming than others, but Dissident already being an established brand helped clear the way of some issues that a completely new brand would encounter. There were already established accounts, and there wasn’t a lot of overstock to deal with. Dissident having a history in the industry was both a blessing and a curse. When a mistake was made or an obstacle was encountered, the Coburns had to figure things out very quickly. Since taking over Dissident, the Coburns have worked diligently to rebuild their stock of cigars and also make contact with and try to win back some accounts that had been lost over the years.