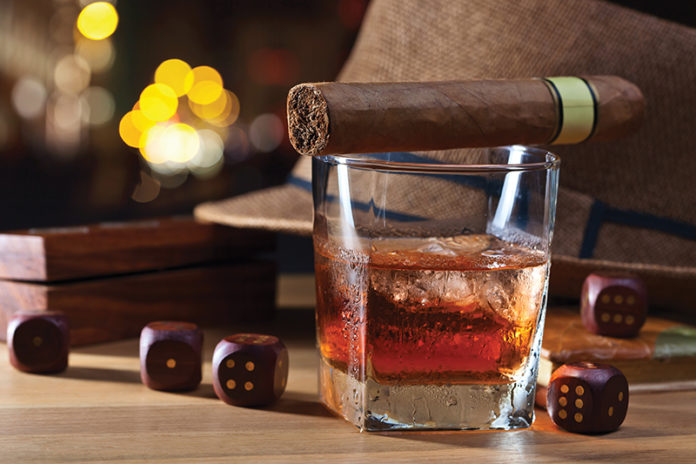 Selling spirits alongside cigars is a good way to diversify, resulting in add-on sales and margins, no matter which category is the dominant one. And if done right, it can beat candy as a complementary impulse purchase. Here are three varying retail perspectives on the killer liquor/tobacco sales combination:

Cox’s Smokers Outlet: Leveraging Liquor
About 30 percent of the business across Cox’s Smokers Outlet & Spirit Shoppes based in Louisville, Kentucky is now in liquor sales, according to Bill Grantz, owner and partner. The eureka moment for Grantz came in 1997, when a liquor store next to one of his tobacco stores went up for sale. He obtained a liquor license, knocked down a wall and started his first tobacco/liquor shop.

Today, Grantz considers his 14 of 18 stores with liquor to be “more like convenience/liquor/tobacco neighborhood-type locations.” He explains, “we have big-box competitors in liquor, but a lot of our stores have drive-throughs, and we’re able to compete as more of an ‘in-and-out’ type retailer.”

Grantz had to learn one lesson in alcohol sales the hard way, he says. “We started to run our rewards program, which we offer on cigars, with alcohol as well; we didn’t know you couldn’t do that here. We got cited and they gave us a warning, so we dropped alcohol out of the program.”

Nevertheless, Cox’s sells a lot of cigars and alcohol together, according to Grantz. “We see that a lot of bourbon lovers are also cigar lovers; we see a lot of basket-type sales where you get multiple purchases like this.”

For that reason, the chain will hold some cigar events where it will have bourbon tastings, too, but those can’t be in-store. In the store, it will hold “liquor and wine tastings all the time without cigars involved; we can taste indoors, but can’t smoke indoors, even in a tobacco store,” says Grantz. “We usually invite one of the liquor distributors in here for this. We generally have the tasting events twice a month and it’s a lot more regular during holidays and Kentucky Derby time.”

Liquor Shop Doubles as Cigar Wholesaler
From the reverse-dominant perspective, Cedar Mill Liquor is a single liquor store in Portland, Oregon that sells cigars from its 32 feet of back-to-back wall cabinet humidors, but also doubles as a cigar wholesaler to other retailers in the area that want to incorporate cigars into their mix.

While the majority of its sales are in liquor (over 90 percent), premium cigars are here to stay and are growing for Cedar Mill. In fact, selling premium cigars in a liquor setting is a growing trend, observes Randy Guerra, owner of the business, which sends about 60 percent of its cigar sales out the “back door to other retailers.” The majority is to area liquor stores with humidors, he maintains.

Cedar Mill Liquor has offered premium cigars for sale since Guerra took over the store in 2002, but he has steadily expanded the stogie inventory and his wall of cabinet humidors to meet growing demand. The wholesale cigar business was born about five years ago, when Guerra realized the complementary business opportunity on a larger scale.