“The new logo is an adaptation of the factory logo, which incorporates the three tobacco leaves, representing the three generations since my grandfather started the factory in 1956. For my family, and for all of us who work at Tabacalera El Artista, the name Artista is so ingrained in our company culture we had to make it the prominent feature. As our flagship line, we wanted to make sure that this new brand had the quality and consistency our company is known for in a package that stands out on the shelf and in the mind.”

“For the Artista lines, we challenged ourselves to make something different,” says Kevin Newman, vice president of Artista Cigars. “We spoke with our factory team and worked with our agronomist and asked them to seek new materials, source often overlooked tobaccos and asked our best artisans to help us develop something wholly different.” 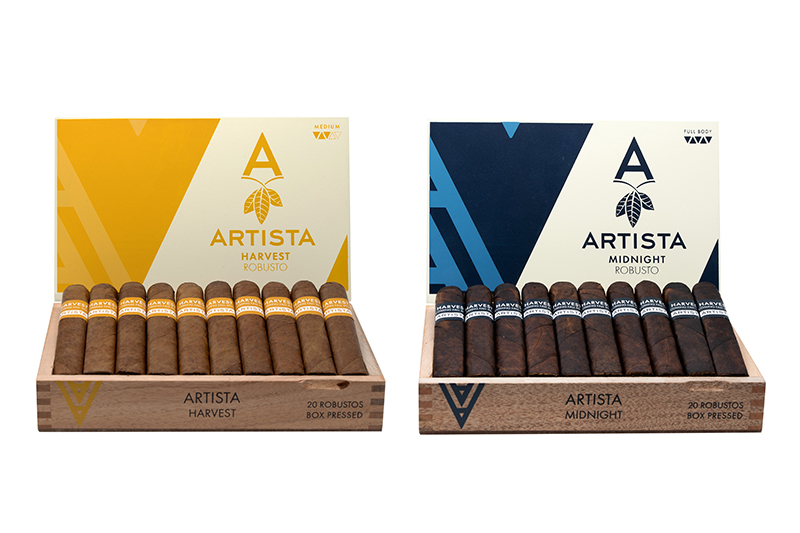 Artista Harvest is a medium-bodied blend that features a top-grade Sumatra wrapper, flavorful Habano Seco binder and proprietary Dominican filler. Sporting a yellow and gold color scheme, the Artista Harvest’s flavor profile consists of rich honey, spice, elderberry, and cashew and almond notes. The Artista Midnight, presented in a dark blue box, is a full-bodied cigar with a dark Ecuadorian Habano wrapper. The cigar’s Ecuadorian Connecticut Shade binder gives the cigar a sweet edge, while the Nicaraguan, Dominican and U.S.-grown filler tobaccos give it deep, rich, earthy notes of coffee, spice and chestnuts. The Artista Midnight is topped off by a citrus finish. Both cigars are available in 20-count boxes and come in two different box-pressed sizes: a 5 x 54 Robusto and a 6 x 50 Toro. The MSRP per cigar is $10.20 for the Robusto and $10.40 for the Toro vitola.

For the already established brands in Artista’s portfolio, Rodriguez and his team saw a need to divide them into different series to help retailers and consumers better understand the different products available to them. Going forward, the Artista Series will be the company’s flagship line. The Rugged Country Series includes Artista’s Fugly Cheroots, Cimarron and Buffalo TEN brands. The David Ortiz Series will include Big Papi, the Slugger and anything else released under Ortiz’s name. Pulita, Puro Ambar and Exactus all fall under the Factory Classic Series as they are the company’s heritage lines and have a unique story and ties to the factory’s history.

“While new releases will be limited to the Artista line, we will continue to support, produce and promote all the other lines. These brands have been adopted by our community, and it’s our duty to continue supporting them through the years,” Rodriguez explains. 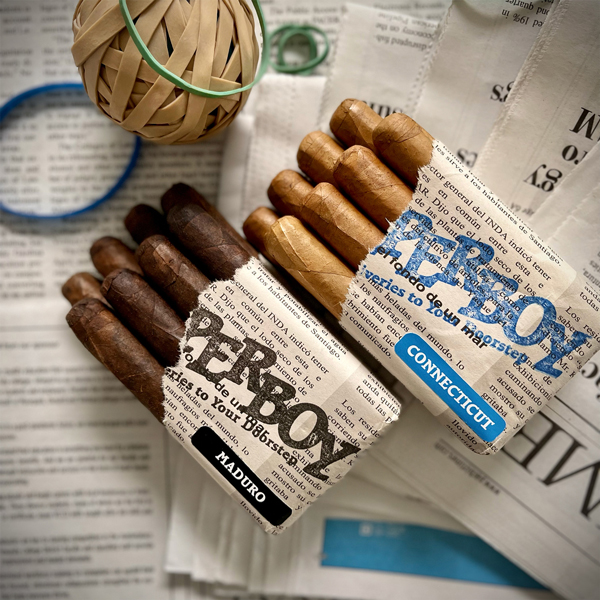 Even though the Artista Series is a modern and sophisticated interpretation and representation of the Tabacalera El Artista operation, Rodriguez and his team felt there was still something missing from its portfolio. To explore its “wild side,” Rodriguez decided to extend the scope of its Artista Studio Works (ASW) program to include cigars.

“ASW gives us the creativity and flexibility to create anything that doesn’t necessary fit into any of the series mentioned before,” says Rodriguez.

Until recently, ASW showcased Dominican artists who produced cigar-inspired artworks and goods, such as humidors and wall art. The ASW platform will continue to support artists but will now also serve as a creative outlet for Rodriguez and his company’s cigar blending team. The first of their releases through Artista Studio Works has already been revealed to be the ASW Paperboy, a newspaper-wrapped bundle of eight Petite Corona cigars.

The ASW Paperboy, presented as a 4 x 44 Petite Corona, is available in two wrappers: Ecuadorian Connecticut Shade and San Andres Maduro. As part of the creative and wild side of the release, the newspaper that wraps the bundles will include wild stories of factory folklore and other made-up stories all written in Spanish. The ASW Paperboy began shipping to retailers in August of this year.

Learning from the Past
Much has changed since Rodriguez first started in the tobacco industry. As a teenager, he didn’t feel connected to the industry and didn’t understand the appeal of cigars. It wasn’t until he gained more experience that he understood why his father and grandfather both made careers for themselves within the tobacco industry and the legacy he was being entrusted with. He may not have understood what he was getting into back in 2017, but today, he feels like he and his company are operating in a much more professional and mature manner. In addition to experience, time also gives someone like Rodriguez insight into the end customer that can in turn help make products even better. 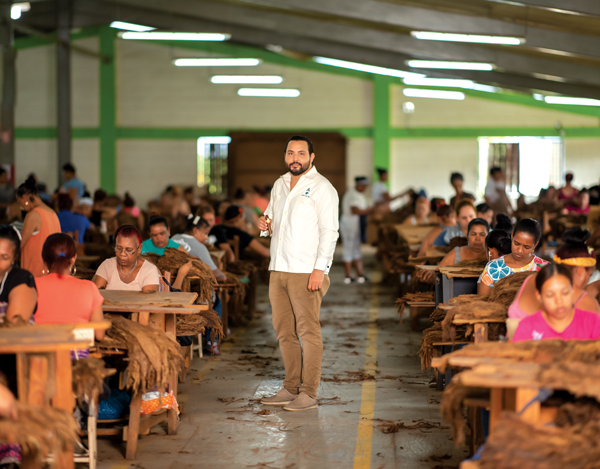 “Today, the consumer has much more knowledge than before, and feedback spreads faster in social media. I feel people are looking for products with outstanding value, quality and consistency,” he shares.

Something Rodriguez has learned over the years while building up Tabacalera El Artista and its various other business divisions is that there is always a different way to achieve what’s desired. The solution to most problems is not dependent on one person but oftentimes should help solve many people’s problems at once. That also ties into Rodriguez’s definition of success: It’s achieved when you and all of the parties involved are able to achieve what everyone desires.

As Tabacalera El Artista, Artista Cigars and TCD Logistics all continue to grow, Rodriguez has never lost sight of what matters most to him: his family. Even with a busy schedule and working most days of the week, he still prioritizes his family and gives them all the free time that he has. He tries to be as flexible with his schedule as possible so that he won’t miss any important moments or events with his family. Every big achievement and accomplishment he has in business is done in honor of his family.

Rodriguez’s father taught him the importance of family and business and to this day serves as a big influence on his life and career. One of the best pieces of business advice that sticks with Rodriguez came from his father: “Let your words be more valuable than your pocket because money comes and goes, but words stay. Make sure you deliver what you promise.”

In order to succeed in business, you have to be open to learning from your mistakes—that’s another revelation from Rodriguez as he looks back at his experiences in the tobacco industry thus far. Perhaps the most important lesson learned is that, with cigars, quality comes from the tobacco used in the blends and the people responsible for seeing that tobacco progress from seed to a finished cigar product. Happy and well taken care of employees will always produce the best cigars on the market. Thus, if you want your cigar or tobacco business to flourish in today’s market, take a page out of Rodriguez’s book and take a personal approach to how you run your business.