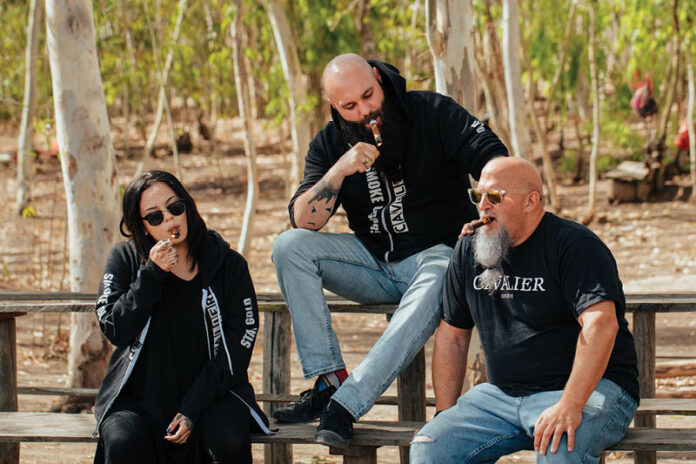 Do you remember what you did when you were 22 years old? When he was that age, Sébastien Decoppet left his corporate job, sold everything he had and booked a one-way ticket to Honduras. If you think that sounds like a drastic change, it was, but it paid off immensely for Decoppet, who knew he had to make a big change in his life if he wanted to learn all there was to know about cigars.

Decoppet did not come from a family of cigar smokers. He got his start smoking cigars while living in Switzerland, frequenting a local Davidoff of Geneva store where he smoked his way through what they had to offer. These cigars left more than an impression on him—they inspired him and launched him onto a very unexpected career path. He knew that making the leap from consumer to cigar professional wasn’t going to be an easy transition. It was going to require a level of knowledge and experience he didn’t have and wouldn’t be able to get by staying in Switzerland. He identified all of the different cigar-producing countries there were and worked with a travel agent to book a trip. Discouraged from visiting certain countries that were subject to rough hurricane seasons, he was told Honduras was a safe bet, so he took a chance and agreed to have the trip set up.

He arrived in Central America not speaking Spanish or knowing much about cigars but was determined to change both of those things. He made his way to Danlí, where he met a close relative to the Plasencia family who made all of the proper introductions that landed Decoppet what you could consider to be the internship of a lifetime, working closely with Nestor Plasencia Sr. and his family. After spending time working with the family, he learned everything from the different characteristics of tobacco to how cigars are blended and rolled.

“One thing to know about this industry is [that] it takes a lot of commitment. It takes a lot of time to learn,” Decoppet explains. “There’s no school; there is no one way to learn; there is no, ‘I’ll go there and learn and be able to understand this industry.’ It’s a very unique industry for that, and the only actual way to learn is hands on. You just have to go and try and look and try to find solutions and find people that know and are willing to share. Lucky enough, this industry is full of people that are happy to share.”

Here’s how Decoppet took what he learned at different stages of his career to build his own premium cigar brand, Cavalier Cigars—also known as Cavalier Gèneve—and launch his own cigar factory in Honduras.

Journey into the Unknown
Decoppet was born in Zürich, Switzerland, in August 1991. While he was still young, his family moved to Geneva, Switzerland, where he went on to spend most of his formative years. Decoppet didn’t start having an interest in cigars until he was almost 20 years old, although the legal smoking age in Switzerland at the time was 16. Since he was living in Geneva when his interest in cigars did begin to take off, he satisfied his curiosity by exploring different premium cigars offered by the local Davidoff of Geneva store. It was around this same time that he began to kick around the idea of creating his own cigar brand.

“That idea to start a business was not directly aimed at the cigar industry at the time but was more of a general research for me. I passed through several projects that I let go one after the other until I realized I wanted to learn more about premium handmade cigars and what went into the making of these products,” Decoppet explains. “I decided to leave Switzerland and my job at the time to move to Central America and see if I could learn more about this world of cigars, at least the behind-the-scenes part. This is when I landed in Danlí, at age 22, and stayed there learning the process for about a year. I would say that I understood that this was really what I wanted to bring to life during this year: working with tobacco in Central America.”

Starting a new cigar company was easier said than done. Decoppet faced several challenges in the beginning, but the most difficult one he encountered was trying to understand how the different markets (countries) worked, especially how the U.S. market differed from others. Being young and new to the cigar business, Decoppet admits that it was hard to find someone who could advise him on this particular part of the business.

“Mistakes were made and corrected, others were made again and corrected again; it is part of the way to learn,” he says. “We have always focused on an international presence for the brand as of day one, but that also forced us to have to understand that not every market can and should be looked at the same way. I believe this explains pretty well why we added operations in the U.S. and moved here from Switzerland.”

When he decided to pursue a career in cigars, Decoppet was around 22 years old and was living in Switzerland. He realized he had to make a dramatic change if he was going to have any chance at succeeding in this new career. He resigned from his corporate job and sold everything he had and moved to Central America with the not-so-simple mission of learning all he could about cigars. Despite the bold, life-altering move, he had no certainty of what would happen once he left all that was familiar to him and embarked on this new journey.

He relocated from Switzerland to Honduras, not knowing any Spanish and finding it difficult to communicate with most people he encountered. After making his way to the capital of Honduras, Tegucigalpa, things begin to change for him. It was there that he met Adin Perez, a nephew of Nestor Plasencia, who took Decoppet to different factories. Eventually, Decoppet met Nestor Plasencia himself, who told him to stay with them if he wanted to learn about the cigar industry he was wanting to get into. Decoppet took Plasencia up on the offer and ended up working in their factory for over a year and also living with them. By the end of this experience, Decoppet knew more about the cigar industry and the art of cigar making and began to make the next moves necessary to create and eventually launch his own brand.

Defining the Brand
The company that Decoppet would launch would come to be known as Cavalier Gèneve, a name inspired by a friend Decoppet made while in Danlí, David Rojas. “He was a particularly interesting person, artist [and] cigar enthusiast from Danlí,” says Decoppet. “At the time, I was having trouble finding a name that resonated with me, and this was when, one day having a cigar with David in his studio in Danlí, he showed me the ‘horse and the man’ drawing that eventually became the logo. For the quick story, he refused to sell the drawing to me. He wanted to gift it to me, but I refused to take it for free.

“I ended up leaving Central America and going back to Switzerland to look at starting the company without a solution for the name. One morning in Switzerland, I woke up to the tragic news that David had passed away. He was in his early 30s. This is when I decided to use that logo and bring David with me on the journey and honor his memory that way. The name Cavalier came from the logo: it means ‘horseman’ in French, my main native language. The company was then created in 2015 in Geneva, Switzerland. This is where the next chapter of the journey started.”

Once the name had been settled on, Cavalier’s branding was the next thing that had to be worked on. The branding was the result of the work of Decoppet’s wife, Eylin. She was responsible for creating much of the brand’s art and identity early on, including the well-known gold diamond. The diamond, featured on many of Cavalier’s cigars, is a symbol that’s become a key identifying feature of the brand that helps retailers and consumers easily find the brand beyond the cigar band. Also helping with the company’s marketing efforts is Wesley McQuillen, who joined the company a little over a year ago to help align Cavalier’s communication with its brand identity. Another key person working to build up the Cavalier Cigars brand is Brian Motola, who serves as the company’s sales director as well as Decoppet’s partner at Fabrica Centroamericana de Tabaco S.A. (FCT).

Maintaining and pushing the vision for the company forward is also a team effort, Decoppet explains. When speaking about how the vision for his company evolves, he compares it to how a kid grows into adulthood—the brand evolves with exterior influences as well as simple internal decisions. This helps maintain the original vision but also brings new and exciting aspects into play and helps create diversity and personality within the company and its products.