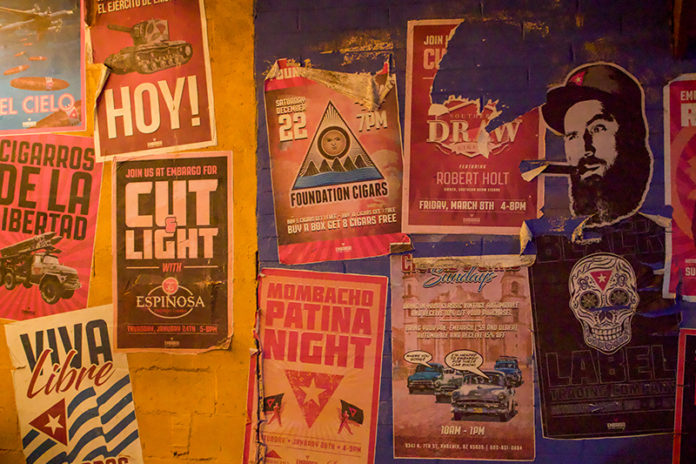 Since it first opened its doors in 2017, Phoenix, Arizona-based Embargo Cigars has become a cigar destination for cigar smokers in search of something new and different. Before Abe Froman launched Embargo, he had an epiphany—there was opportunity to be had doing things as he wanted rather than how others told him to. Whereas the more traditional tobacconist typically stocks their store’s shelves with recognized brands, Froman instead embraces the lesser-known boutique brands.

Today, the cigar industry is full of up-and-coming “new” brands like Cavalier Geneve or Oveja Negra that are producing cigars that excite cigar smokers. There are also boutique brands that are more established, such as Tatuaje and Room101, that have loyal followings of cigar smokers who are constantly seeking out each of their releases.

While Embargo Cigars wasn’t Froman’s first choice for a name for his tobacco business, it was inspired by his deep appreciation for and knowledge of the cigar category. “I tried to think of a name that was unique to the industry and that hadn’t been overused but still paid homage to the industry. We’re not for the embargo, and we’re not against the embargo, but you cannot deny the Cuban roots of the term ‘embargo.’ Cuba is where the industry started. It’s the foundation of our industry, and the term embargo, for me and many others, really clicks.”

Froman’s understanding of tobacco retail sets him and his store apart from others. While the products he stocks in his store are important, so is the appreciation he has for all facets of the cigarmaking industry. The passion he has for the industry and his profession, he explains, must be shared by everyone that works within his business and must be passed on to every customer that walks through the doors of Embargo Cigars.

Customers of Embargo Cigars recognize and share in Froman’s love for the cigars. Some of the store’s patrons travel as far as 150 miles to take part in the business Froman has built. He has some customers that are local, some that travel from other areas of Arizona and even a few from other states. The biggest payoff for Froman has been the impact he’s had on the lives of others and how he’s been able to create a business that not only welcomes people from all walks of life but that ultimately makes people happy. 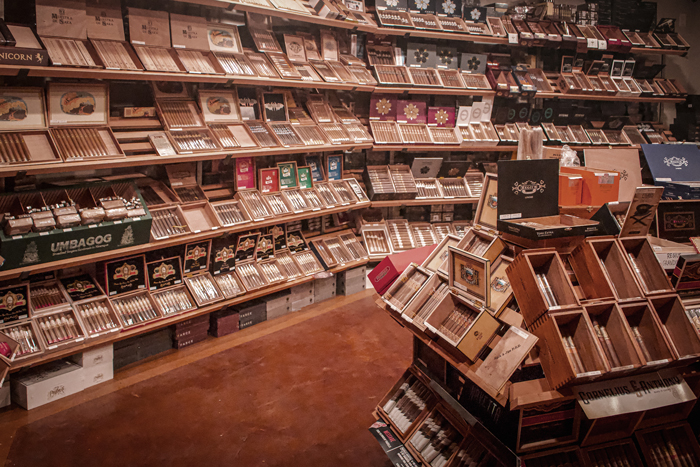 Reworking the Ratio
Froman discovered cigars when he was still young. While on the way to a Dodgers game with a friend, Froman smoked a Swisher Sweet Perfecto with a friend. Shortly thereafter, he tried to recreate that experience, but this time, the cigar-smoking experience was far from ideal. In 1995, when he was just 18 years old and living in San Diego, a friend informed him of a job opportunity that involved working in a local cigar store they both frequented. Froman applied for the job, figuring it would help him pay for college expenses but not knowing it would serve as a precursor to what would become a long career in tobacco retail.

“I absolutely loved the industry,” he says. “That was an incredible time in this industry to get into cigar smoking. It was back in the mid-ʼ90s when the Cigar Boom was going on. I don’t think you could have asked for a better time to be able to discover this industry. I was working there five, six days a week, and I worked there for about six years.”

In 2001, Froman moved from Arizona to California. At the time, Froman was focused on his real estate career, which had him commuting between the two states regularly for work. When he first arrived in Arizona, he realized the area was severely lacking in cigar stores, which gave him the inspiration that maybe he could start his own. His real estate career kept him busy, and it wasn’t until that idea came to mind again that he decided to act on it. Five years ago, Froman was helping a friend who owned a cigar shop find a new location for his store after his lease had ended. A property was acquired, but his friend was unable to go through with the deal, leaving Froman to figure out what to do with the site. Froman was helping his friend secure a new location for his store because he wanted a place where he could hang out and smoke a cigar. After a couple of months, Froman decided on how to handle the property—he’d use it to help him fulfill his longtime dreams of starting his own cigar lounge.

“I wanted to create an environment that was different from every other cigar lounge,” he says. “I wanted something that was unique, something that whether you’re in shorts and a t-shirt or a suit and tie, we were a completely comfortable casual environment that everyone was welcome at. With regards to our selection, I wanted to present some of the best cigars of our industry.”

Embargo Cigars doesn’t have any sort of membership program because Froman wants to ensure the store remains open and accessible to all. With the store’s humidor only measuring 800 square feet, Froman works hard to ensure that the 900 SKUs packed into it are those that will appeal to his store’s customer base. Figuring out what products to feature in his store was one of the defining moments for his upcoming foray into tobacco retail. He wanted to offer his customers something unique that they wouldn’t find at any other store in the area. This is what drew Froman toward smaller “boutique” brands that were making exceptional cigars, simply on a smaller scale. Froman’s love for smaller brands went far beyond the product. He understood the challenges many of these manufacturers faced while squaring off against the U.S. Food and Drug Administration (FDA) and its strict regulations.

“Because of the FDA, it’s challenging for these smaller manufacturers to really become as creative as they should be able to, but I wanted to have a cigar lounge that really kind of celebrated that change in our industry—going from those big core companies to the smaller [companies], kind of like the craft beer revolution of the ’90s.” says Froman.

After he decided to open his own cigar store and lounge, Froman attended that year’s International Premium Cigar & Pipe Retailers Association (IPCPR) trade show and convention and shared his retail concept with other retailers who were in attendance. Many retailers told him that building a store around boutique cigar brands would be a mistake and that his store would inevitably fail. He was informed that the standard ratio of core to boutique brands for tobacconists was 80/20, but Froman refused to accept this as being the only option for success.

“I apologized and told him that I was dyslexic and [that] I had an idea that I was going to be 80 percent boutique and 20 percent core,” he says. “When we finally opened the shop and counted the stock, we were about 90/10, and the 10 percent that was a slower mover in our shop from day one was that core line. People came and sought out Embargo for the unique selection that we had.”

Since opening its doors in 2017, Embargo Cigars has fully embraced the boutique side of the cigar industry, and Froman has plenty of reasons to do so. As a retailer, he knows there are certain brands and products that he must have in stock because customers are most familiar with them, and there’s always going to be some demand for those well-known brands. Froman notes that larger brands, however, don’t offer the same sort of attention and customer service as the boutique companies do. When he first opened his store, a sales representative from a large cigar company showed up at Embargo Cigars and promised to return in a month to help him stock his store’s shelves. He hasn’t heard from or seen that rep again. Froman names several other large companies and notes that he has no idea who his area rep is and often buys these companies’ products from a wholesaler. As a brick-and-mortar retailer, Froman is also concerned with and questions the role that larger manufacturers play in the battle the entire cigar industry is facing against the onslaught of regulations and legislative attacks.

“PCA [Premium Cigar Association] is the only organization that fights for our industry, that fights the legislators and helps stop legislation that impacts us,” says Froman. “This is why I love the smaller companies and the boutiques—because they’re the most impacted. The larger companies that have pulled out of the PCA: I wish more retailers understood what that, and how that, impacts their business.”

One of the biggest fears Froman has as a retailer is that the boutique companies and those behind them will be put out of business by stringent regulations over the next decade. He’s also worried that the revolution that has ushered in new and memorable releases from those like Tatuaje’s Pete Johnson or Room101’s Matt Booth may be slowed by the overregulation of the cigar category at the hands of the FDA and that the market could be flooded with subpar products. This is a trend he’s already starting to notice occurring now and that he is having to deal with as a retailer.

“Companies are pulling out stuff that didn’t sell years ago, but they registered the blend, put a new wrapper on it or a new band, called it something else, and they’re selling it as something new now,” he says.

Advocacy and supporting small businesses within the cigar industry are both very important to Froman and his business. “There are some retailers that stand up and fight, and I respect and appreciate and love them for what they do, but not everyone does that,” he says. “I hope enough people get together collectively and understand the impact of what’s happening. How many more years can the PCA actually survive if we don’t have the support of these bigger companies, or the support of more retailers? While you may not feel that the PCA directly impacts you as a store owner or as someone that works in the industry, it certainly does.”