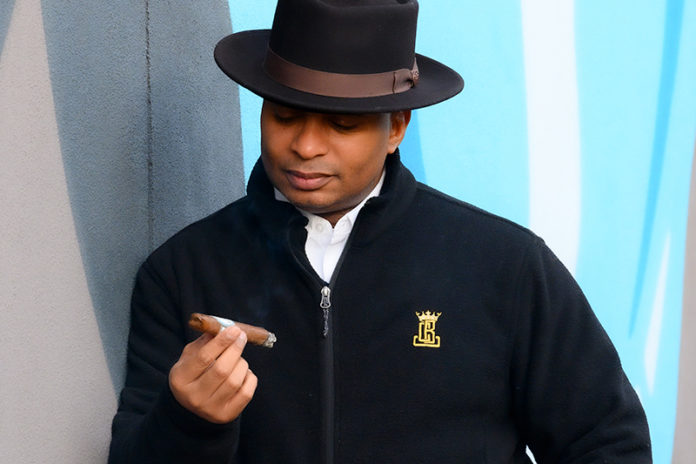 Christopher Moore grew up learning about tobacco, some from his grandparents and some through personal experience. Moore grew up in New York City’s diverse Bronx borough and spent his summers in North Carolina, where he would work alongside his grandmother in the tobacco fields. Though the tobacco he and his grandmother would tend to was often used in cigarettes and chewing tobacco products, this experience gave him an unique appreciation for this special plant. These early experiences with tobacco also served as a foundation for Moore later in life as he set out to create his own cigar brand in 2016, Carolina Blue Cigars.

Moore is a veteran and small-business owner who has built his tobacco business not to compete with larger manufacturers but to instead give cigar enthusiasts a great smoking experience. While some entrepreneurs are motivated by big profits and notoriety, Moore is chasing after something completely different—he wants to get better, and he wants his brands to continue to improve both in both consistency and quality. As a small-business owner, Moore has had to set his aim on high goals to get his business over many obstacles in recent years.

Going to Market
Moore’s love for cigars came as he entered the military. Moore’s family has deep roots in the military, and he knew that he wanted to continue that tradition after attending Fayetteville State University. On his way to basic training, Moore purchased two cigars that he planned on smoking ahead of his first day of training. He smoked his first cigar on his hotel’s balcony before his first day in the service; the second cigar didn’t get smoked until he was retiring and leaving the service. In between these two life milestones, Moore would smoke the occasional cigar while he was enlisted.

Moore, who is also an avid golfer, played in several golf tournaments between 2014 and 2015. It was during one of these tournaments played in the Dominican Republic that his uncle floated the idea to Moore about creating his own cigar brand based on and influenced by golf.

“After thinking about it for a few weeks, I said to myself, ‘Sure, why not?’ I knew enough about tobacco that I felt I could make it happen. The hardest part for me was naming the brand because I didn’t want to put my own name on the cigar. Nobody was going to buy a Chris Moore cigar—they would be like, ‘Who is this guy?’” Moore explains. 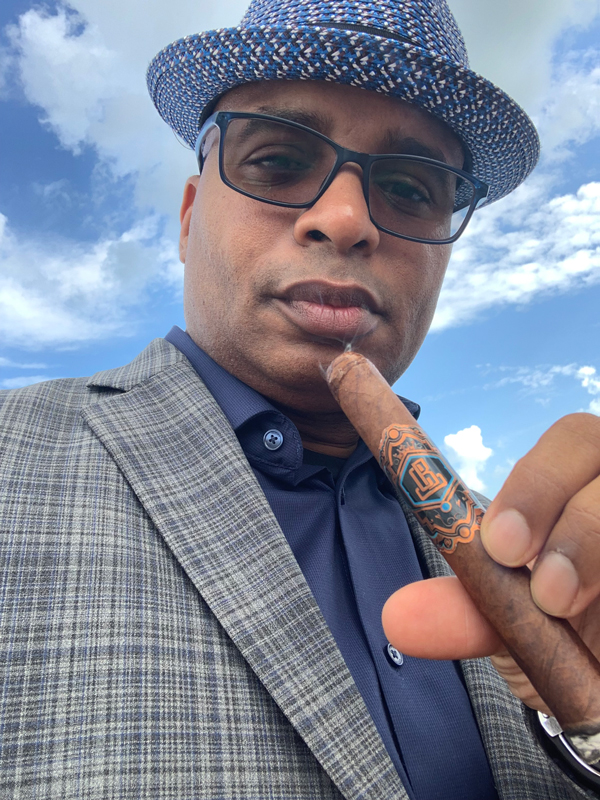 As he thought about what to name his new brand, Moore settled on Carolina Blue Cigars because it reminded him of how the sky looked during those summers spent in the tobacco fields of North Carolina as a young child. Naming his brand was just part of process and challenge he would face as he built his business from scratch. Moore knew he had to get people to know who he was and to care about his cigars in order to build brand recognition. He also knew he wanted his brand to strike a delicate balance between supply and demand in order to support brick-and-mortar retailers.

“No brand wants to have a million cigars that they can’t sell since the cigar industry is being flooded with a lot of boutique cigar brands. It’s about making sure consumers don’t see Carolina Blue Cigars as a fly-by-night type of brand but more of, ‘We are here to stay, and this is only the beginning,’” he explains.

The last challenge was something that Moore realized he’d have to accept as a reality in order to move his business forward—some people would support the brand, and others simply wouldn’t. To get over this hurdle, he knew it would be important to focus on creating experiences that potential consumers would enjoy and remember, and he knew he could achieve that through a good cigar. The better the cigar and the experience he could create for people, the more word-of-mouth marketing he knew he could expect in return to help Carolina Blue Cigars become well-known.

One thing Moore did not want to do with his business was to try to compete with bigger brands. He knew his company and its cigars would be considered boutique, which is essentially a small business, and something he worked toward rather than against. To Moore, boutique cigar brands that he knew tailored their flavors and smoking experiences more toward the consumers, unlike some larger manufacturers that relied on name recognition alone to sell their brands. For these reasons, he placed more of his focus and attention on other aspects of his business that could make a difference, including marketing, sales, federal regulation, the farming process, different tobacco grades and, most of all, the blending process. When it came time to really create the brand and determine what set it apart from others in the industry, Moore found that focusing on blends was the most important to him because through a blend he could give his customers a unique experience by creating a cigar that had great transitions.

“What Carolina Blue does is give you something that the bigger brands can’t,” he says. “Our cigars have nice transitions from the first third to the last. I feel that it’s my responsibility to provide an experience and excellent customer service because at the end of the day I want clients, not customers—there is a difference.”

Another aspect of being a small-business owner that Moore understood early on was the need for building good relationships within the industry. There are people within the industry that Moore calls on whenever he has a question or is having an issue, and these individuals provide him with advice from different perspectives. Dean Parsons, the owner of Epic Cigars, and Sean Williams, Cohiba’s brand ambassador, are two professionals within the cigar industry that Moore turns to for advice, feedback and guidance, along with several brick-and-mortar retailers.

When Carolina Blue Cigars finally came to market, it didn’t take long for retailers to take notice and to bring the new brand into their stores. Within its first three months after launching the product, Carolina Blue Cigars was in 15 different stores. One of the biggest accounts that Moore was able to land for his brand was a Casa de Montecristo store in North Carolina and, later, online retailer JR Cigars.