In all, Almonte’s company grows seven different kinds of tobacco in the Dominican Republic, and when a blend requires it, his company will purchase tobacco grown elsewhere on an as-needed basis. He’s confident that the cigar lines that he has and the products that are released are his best work and works hard to communicate to the industry why that’s the case. When he first launched his company in 2013, a retailer asked him why his store should carry his then-new cigar brand. Rather than give him a direct answer, Almonte chose to give the retailer a challenge to prove his point.

“I asked him to remove the label from one of my cigars and said to him that I wanted to buy five cigars that he liked. I said, ‘Let’s remove those labels, and let’s give one of each to every consumer that comes in. He did just that and guess what? The people liked our cigars. Why? Because we focus on something that many people like: flavor, good draw, good construction.”

The tobaccos used in DBL’s cigars are well-aged and also undergo a double fermentation process. This double fermentation is especially important for those tobaccos that are purchased from other growers as it helps it to reach a level of quality that Almonte demands from the tobacco he grows on his own. Flavor is another area of the blending process that Almonte is obsessed with.

“You’re never going to find a DBL cigar without flavor,” he proclaims.

Few retailers and consumers get to visit Tamboril and see Almonte and his team at work creating the blends. This leads back to that question of “Why should I buy DBL cigars?” To address this question, Almonte has developed his own approach to marketing his brand that works for him. Early on, he was advised to promote his company and products with print and social media advertising. What gets the best results in terms of promotion, however, is getting in touch directly with the consumers and educating them on the brand and also his own life experiences.

“I think this is the best way to promote today,” he states. “When they see the person who is behind that brand, talking, working, hosting a seminar and rolling cigars, they appreciate the product, and demand increases. That’s how we’ve grown organically.” 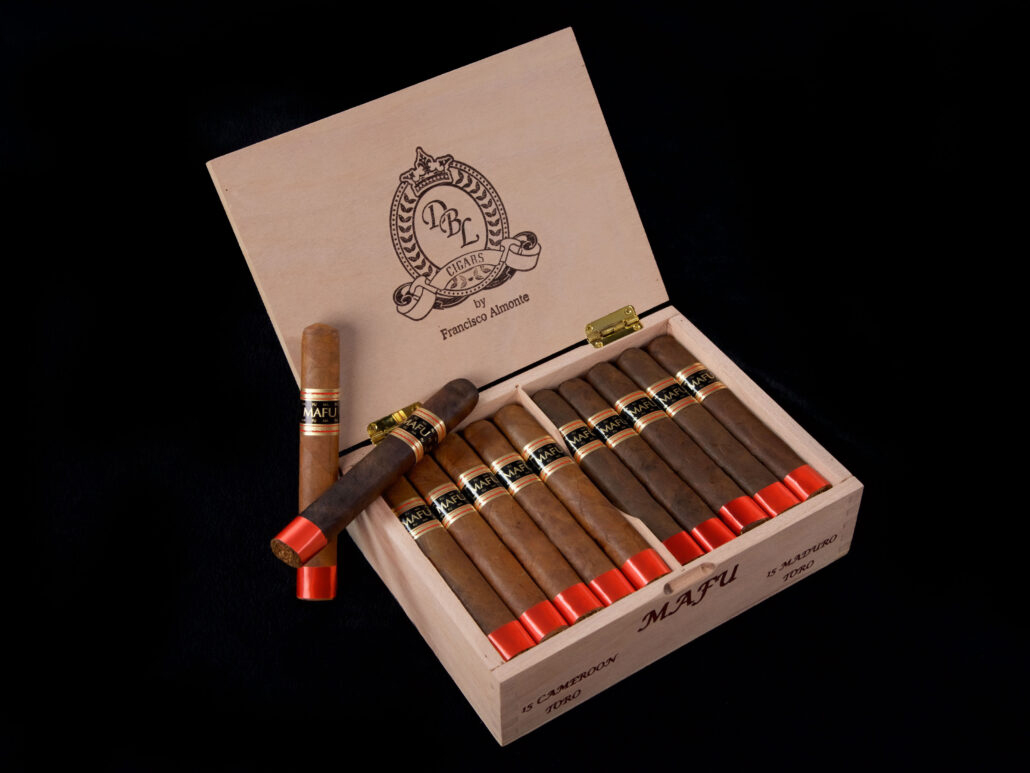 At DBL’s rolling events, Almonte has several different things he sets out to achieve. The overall goal isn’t to sell products but to educate consumers about the company and how its products are made. Almonte talks about the seeds that are planted, the tobacco fields, the growing process and what happens to the tobacco during the fermentation and aging stages. Almonte’s learned a great deal about tobacco and cigar making since he first entered the business, and these in-person seminars are the best venue and platform to communicate his experiences and knowledge to consumers.

“When they get that kind of seminar where there is information provided that is very difficult to get online or in social media, they appreciate that,” he explains. “And when you make a cigar in front of them with different blends and they try a freshly rolled cigar, it is like going to a bakery and buying some fresh bread; it’s a different experience.”

Communication is a part of the marketing and sales process many brands and retailers don’t spend enough time on, Almonte goes on to explain. Being able to speak confidently about what makes DBL Cigars unique is key to the company’s in-store success. Also, knowing how to merchandise it properly in a store is key. If a retailer states that they like DBL, Almonte encourages them to recommend it to their customers and place it in a nice position on the shelf or in their humidor. To many consumers, DBL may be a new brand to them and it needs to be talked about so that consumers can learn more about it. Those retailers that follow Almonte’s advice ultimately have more success with its products.

Parental Business Advice
Almonte’s father has always encouraged him to do the best that he can at whatever he set out to accomplish. This advice has stuck with Almonte throughout his life and career, which is why he’s worked hard to make DBL Cigars a company that only puts out the best products. There is no such thing as a second-rate cigar or mediocre tobacco in Almonte’s world. Everything is high end and top quality, from the tobaccos used in the blends to the final products that are shipped to retailers around the world. Almonte’s in pursuit of success but wants it on his terms, not on those set for him by others.

“Let me tell you, honestly, I follow nobody. I love to create; I love to develop new things: new presentations, new labels. I don’t like to copy; I want to be the best,” he shares. “I focus on quality, good price points and presentation. I don’t want to copy. I don’t want to make the same shaped cigar as other people do. When I make something, I always want to create, to innovate, something different.”

Retailers and consumers can see Almonte’s creativity and desire to innovate the cigar category with some of his more “out-there” releases, such as the DBL Baseball Bat cigar, which is named for how it’s shaped, as well as the “pipe” cigar, which is a premium cigar shaped to look like a tobacco pipe. Almonte loves a challenge and uses challenges to spark his creativity. The Amarillo Fancy Belicoso is one example of this. It’s hard to make a box-pressed Connecticut cigar or a Belicoso cigar that’s also torpedo-shaped, so Almonte created a cigar that’s all of those things. The pipe cigar and the Fancy Belicoso are just two examples of how Almonte has set out to create a blend that people will like but that also is presented in a way that makes it different from most other premium cigar products on market.

The drive to be and make something different is what helps Almonte and the DBL Cigars brand continue to evolve and grow. When he first started his company in 2013, Almonte only had 500 pounds of tobacco to work with, which limited the amount of cigars he could make. Today, he has enough tobacco to make 2 million cigars, but he caps his production at 700,000 cigars in order to maintain a good inventory of tobacco to produce consistent cigars. This goes back to what his father has long advised him: do your best, and do better. His father also taught him early in life that what you grow is what you’ll receive, and that lesson has shaped how Almonte has run his business and conducted himself in life.

Almonte’s mother died when he was 17 years old, but she’s another person who had a great influence on him and his outlook on life and business. “When I was 17 years old, my mom said to me, ‘You need to have integrity; you have to be loyal; and you have to be honest. When she died, do you know how much my mom left me in the bank? 117 Dominican pesos. This is two dollars. She didn’t leave me any money. We were a poor family, but on the other side, she gave me the best treasure you can give to a son through all of those good things that she taught me and that she encouraged me to do.”

That’s the advice Almonte wants to pass on to others working in today’s tobacco business: You have to be honest, you have to be loyal and you have to work very hard to get the best results for your family, your friends and your community. If you want success in business and in life, do better each day and try to do your best. It’s what has worked for Almonte and served as his business mantra for years.

– Photos courtesy of DBL Cigars and Ben Duran. Story by Antoine Reid, senior editor and digital director for Tobacco Business Magazine. You can follow him on Instagram @editor.reid.