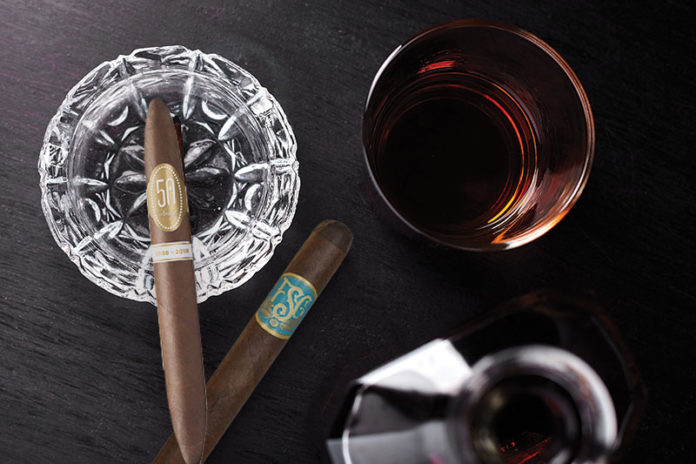 Over 25 different cigars in four different categories were included in this year’s Tobacco Business Awards. These cigars were chosen by retailers, consumers and other manufacturers, who also cast their votes to select the best of the best. The cigars on this year’s list are some old favorites along with some newer additions. They are manufactured and produced by a wide range of manufacturers, both big and small. The cigars were ultimately ranked by how many votes they received overall in this year’s awards, with four earning special distinctions for winning their categories.

Jonathan Drew, founder and president of Drew Estate, had this to say about Florida Sun-Grown’s (FSG) big win: “This is a big honor for Drew Estate. When I think of 22 years in business and the things that we create, think for yourself for a second—take what you do in Nicaragua, be able to transcend here to the U.S. The bottom line is on the FSG, what it comes down to is that we just want to kick it at Drew Estate. We blow the brain box on what we do because we live it. With the FSG, that’s a deep extension, bringing Florida Sun Grown tobacco—when you take tobacco and grow it in the United States, you encounter many problems and many difficulties. Jeff Borysiewicz of Corona Cigar Co. has done what hasn’t been done since 1977—brought tobacco back to Florida.”

In 2018, Davidoff Cigars celebrated its 50th anniversary by bringing back a cigar that it first introduced in 2006—the Diademas Finas. From the beautiful packaging to the exemplary blend, 2018’s limited-edition Diademas Finas got cigar aficionados in the U.S. and abroad excited and feeling celebratory like the many men and women who have helped build Davidoff’s legacy over the past 50 years.

“If Davidoff had a signature, it would be written with this exceptional Diademas Finas cigar,” says Edward Simon, head of global marketing and innovation at Oettinger Davidoff AG. “It’s a celebration of our master blenders’ craftsmanship, built with 10-year-old filler tobaccos from one of our best crops in 2005. The blend has an unparalleled sense of balance and the signature Davidoff sophistication.”

Several professional athletes have teamed up with manufacturers over in the past several years to lend their names to a premium cigar, but few have managed to generate the interest and following that Tabacalera El Artista’s Big Papi by David Ortiz has. First announced in 2016, the cigar gets its name from David Ortiz, a professional Major League Baseball player known for his home runs. Ortiz has been hands-on with the creation of this cigar, working alongside Tabacalera El Artista’s Ram Rodriguez and his team on the blend and its marketing.

“We’ve been overwhelmed since we began selling this brand and have seen it grow exponentially,” comments Rodriguez. “Right now, it’s our best-selling brand on the brick-and-mortar side.”

This year, Maya Selva Cigars’ Flor de Selva Colección Maduro earned the distinction of Cigar of the Year. As a cigar produced in Honduras, some U.S. consumers may be unfamiliar with this particular brand, but it has earned high marks from aficionados across the globe, with the Flor de Selva Maduro No. 15 being fan favorite for many.