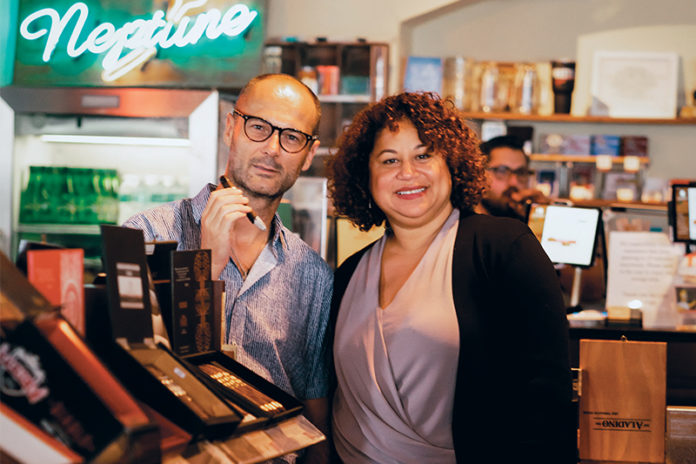 On Oct. 26, 2019, nearly 500 people gathered at Vizcaya Museum and Gardens in Miami, Florida, for a spectacular gala to help Christophe and Luz Normand celebrate the 20th anniversary of their business, Neptune Cigars. With a stunning view of Biscayne Bay in the background for the 1920s Prohibition era-themed party, nearly 40 premium cigar companies helped sponsor the event. Many of those companies’ star cigarmakers attended the party, including Arturo Fuente’s Liana Fuente, Bobby Newman from J.C. Newman Cigar Co., Rocky Patel’s Nish Patel, Nestor Plasencia from Plasencia Cigar Co., A.J. Fernandez from A.J. Fernandez Cigars, E.P.C. Cigar Co.’s Ernesto Perez-Carrillo, Nick Perdomo from Perdomo Cigars, Miami Cigar & Co.’s Nestor Miranda, Alan Rubin from Alec Bradley Cigars, C.L.E. Cigar Co.’s Christian Eiroa, Michael Herklots from Nat Sherman and Maya Selva Cigars’ Maya Selva. Guests enjoyed cigars from these companies and many others, as well as signature cocktails and food, and they danced to live music until the early hours of the next morning in a blowout bash almost as big as the business it celebrated. Twenty years after starting Neptune Cigars as a premium cigar brand, the Normands have transformed the company into a large, independent, online premium cigar retailer as well as a traditional brick-and-mortar retail tobacconist that has three locations in South Florida—one in Fort Lauderdale, one in Miami’s Little Havana neighborhood and one near South Miami’s Dadeland Mall.

“Our success can be attributed to remaining innovative as well as being attentive to all levels of premium cigar manufacturers, especially the boutique companies,” Luz comments.

“We believe in diversity, not uniformity, and our customers who are looking for boutique cigars know that we’re likely to have what they’re looking for because of our focus on carrying as many cigar brands as we can.”

Setbacks Lead to Opportunities
While Neptune Cigars’ focus today is to stock a wide variety of premium cigars in its brick-and-mortar stores as well as online, in 1999 the company ironically began to support the sale of a single cigar brand: Neptune. At the time, Luz was working as an international business attorney who specialized in helping companies set up businesses throughout the Caribbean. Christophe had been a quality control manager at SEITA, the French state-owned tobacco monopoly, and supervised the making of SEITA’s cigars at its factories in the Dominican Republic. Christophe left SEITA shortly after its 1998 acquisition of Consolidated Cigar Corp. and had dreams of establishing his own national cigar brand in the United States, but his timing couldn’t have been worse.

Through the mid-1990s, the premium cigar market in the U.S. had exploded in popularity, and new brands and retail stores seemed to pop up everywhere overnight. Premium cigar imports into the U.S. soared, and both cigar manufacturers and tobacco growers greatly expanded their business operations in hopes of cashing in on the premium cigar craze. Just as quickly and unexpectedly as the Cigar Boom rose, the bubble burst and the need for new cigar brands dramatically slowed. While Christophe had created a good product, few retailers had the shelf space or the capital to invest in it. Instead of traveling the country trying in vain to place Neptune’s cigars in retail shops, Christophe decided to sell his cigars directly to retailers via an emerging technology: e-commerce. An engineer with an inquisitive mind and interest in developing technologies, Christophe built a website, and the online retail store, Neptunecigar.com, was born.

“We did really well,” Luz recalls. “There wasn’t a lot of competition at the time. It was the beginning of the dotcom retail scene, and people who lived in areas that didn’t have a cigar shop nearby found us.”

Neptunecigar.com did so well, in fact, that the production of Neptune cigars could not keep up. The Normands needed cigars from other companies to supply their steadily growing customer base. Within a few years of launching Neptunecigar.com, its cigar selection grew to include dozens of premium cigar brands. Expanding the product selection also grew the customer base, and as the 2000s progressed, online shopping became a more accepted practice among consumers—and the customer base grew even larger.

Building Synergy
While the online store grew, the Normands recognized the need to open a brick-and-mortar retail location to serve customers closer to home as well as to give tourists visiting the Miami area an opportunity to shop with Neptune Cigars while in town—and then, hopefully continue to buy from Neptunecigar.com once they returned home. The first traditional brick-and-mortar Neptune Cigars Super Store location opened in 2009. Within the last decade, two more Neptune Cigars Super Store locations have opened as well, each with a smoking lounge as an integral feature of providing an overall excellent customer experience.