El Septimo’s Better Way
When he purchased El Septimo Cigars in March 2019, Younan did so not only because he loved the company’s cigars but because he saw that he could add value to it. El Septimo was already standing on a firm foundation of success. The company had its own tobacco farm in the mountains surrounding San Jose, Costa Rica. The rich soil of the volcanic mountains had previously been untouched by tobacco growers and offered El Septimo’s agronomists and tobacco growers fields rich in nutrients. The farm’s high altitude also offered the perfect climate with the ideal natural humidity for tobacco growing without the need for fertilizers, herbicides and insecticides, whose use could potentially affect the tobacco’s flavor and aroma. El Septimo’s previous owners had constructed a cigar lineup of luxurious smokes made from the organic tobacco it grew. These blends, composed of tobaccos aged anywhere from five to 15 years, offered unparalleled flavorful and aromatic cigars with the rich and creamy taste that discerning cigar connoisseurs like Younan demand.

“We plant our own seed every year,” Younan says. “We touch each plant with our own hands and watch it grow with lots of attention and love. We age the tobacco ourselves. We blend and hand-roll the cigars ourselves. We are very heavily involved in all the processes of making cigars, and that is one of the big advantages of El Septimo.”

Before Younan purchased El Septimo Cigars, the brand was only available in a few retail shops in Europe and Asia as well as on the El Septimo website. Younan’s immediate goal is to expand both El Septimo’s presence in the market and the company’s product offerings.

“My goal for the company is to grow the brand in the U.S., as we are in the process of gaining [U.S. Food and Drug Administration] approval,” Younan says. “El Septimo is the world’s most exclusive premium cigar. All we have to do is have people try it, and then they can tell the difference instantly. We are working on getting our product into the U.S. market through retailers and cigar lounges—but not to everyone because our product is very unique and special, and that really needs to be explained to customers so they understand what they’re buying. The brand is very well-known globally but not in the U.S. at this time. The U.S. is the biggest market in the world, so our focus is to grow the brand in the U.S. Initially, we are going to offer El Septimo to one retailer per state. It is a product that is so good that it doesn’t need to be pushed on the market but will be pulled by the consumer. We don’t need to have El Septimo for sale at every cigar lounge or cigar store—it is not Coca-Cola, and it never will be. We want the pull to have it available in every state so that when people try it there is one place they can buy it from. After that, we will grow our distribution network to other stores, but within the next 12 months we want to have El Septimo’s cigars available in one retail shop per state.”

El Septimo’s approximately 40 different offerings are split into five segments, each of which contains a variety of selections and is largely defined by the age of the tobacco that is used in making the cigars—The Zaya Collection, The Luxus Collection, The Travel Time Collection, The Alexandra Collection and The Gilgamesh Collection.

The Zaya Collection cigars are made using high-quality tobaccos that are aged between five and 15 years. The Zaya Collection consists of seven different cigars than range in strength profile from mild to full-bodied and offer an array of flavor notes and an overall creaminess.

“The Alexandra Collection is the first of its type,” Younan explains. “Many years ago, there wasn’t a single woman who was a sommelier in the wine world, yet today 53 percent of sommeliers are women. Biologically speaking, women have better-developed palates and senses of smell and taste. Harvard and the University of Brazil studies confirm this. When I used to smoke a cigar, I would find it very good for me, but my wife found it very strong. We had some of our analysts study this issue, and we found that women identify odors and tastes at concentrations up to 11 orders of magnitude lower than men at increasingly diluted concentrations due to the fact that women have 43 percent more cells and 50 percent more neurons than men in the olfactory centers of the brain, thus giving them more taste buds with a heightened sense of smell in comparison to men. So, if that’s the case, we can’t have a product be the same for men and women. We designed a product more tailored for women, though a lot of men buy The Alexandra Collection too. This entire project was designed for women, keeping in mind women’s sensitive receptors and subtle preferences, especially for those who would be smoking a cigar for the first time. We didn’t want women having a bad experience or thinking that El Septimo cigars had too harsh of a taste. So, we brought our wine blenders from France to Costa Rica. They were there for about two months after we had bought the company, and they came up with the specific leaf and blend to be able to design something that will be more pleasing to women with their sharper palates and senses of taste and smell. The Alexandra Collection is for people who want something milder—very gentle but tasty.”

The Gilgamesh Collection is the newest El Septimo cigar line, and it features two 6 x 50 cigars—the Aqua Anu and the Sable Samash. The Aqua Anu is a medium-bodied cigar that offers flavors ranging from coffee with cream to a slightly peppery spiciness. The Sable Samash is the full-bodied Gilgamesh blend and offers smokers yet another complex blend of flavor notes ranging from espresso to black pepper. 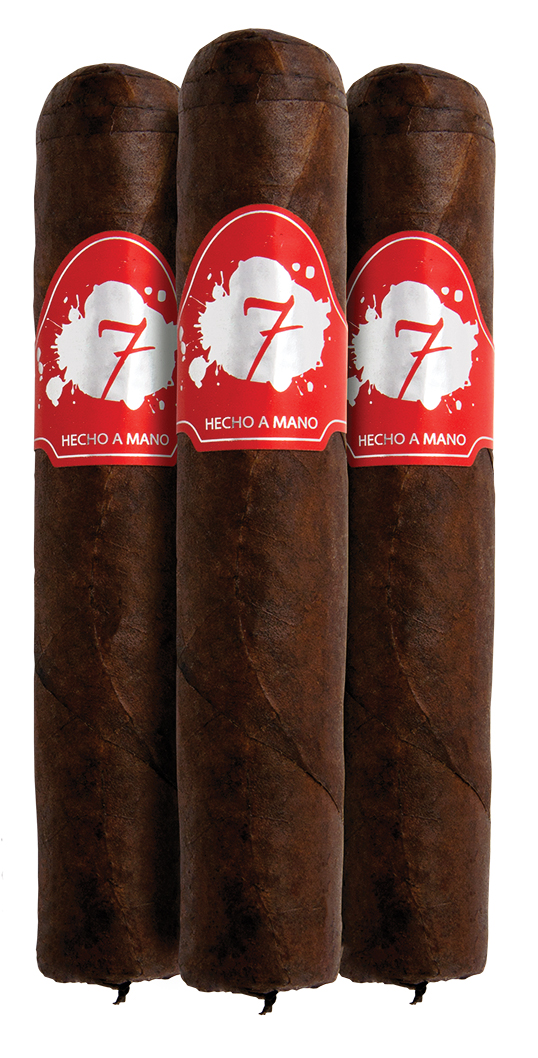 While there are approximately 40 different El Septimo cigars for consumers to consider, each of the cigars is truly unique. Yet, one characteristic that binds the entire line together is the complexity and richness in flavor in all El Septimo cigars. An El Septimo cigar is not one to be enjoyed as an afterthought but rather as a companion that draws a smoker’s attention to the exchange of flavors that each cigar offers as it is being smoked. Another feature of all of El Septimo’s cigars is that even the fullest-bodied offering never overwhelms a smoker’s palate with high-octane strength—this is thanks to the aged tobaccos that El Septimo’s team of expert cigarmakers hand-select for use. Indeed, El Septimo specializes in making “flavor bomb” cigars rather than “strength bombs.” Its arsenal of large ring gauge cigars draws out El Septimo’s special talent in blending its tobaccos to offer smokers complex but elegant gustatory delight.

“El Septimo’s cigars are beautiful and sexy,” Younan concludes. “They are made meeting only the most demanding quality requirements, and the taste is magnificent. We have a very small portion of the market right now, but I think in the future that we will capture a large part of the market because we are a unique product with a lot of interesting flavors, offering a very special experience that others cannot offer.”

– Story by Stephen A. Ross