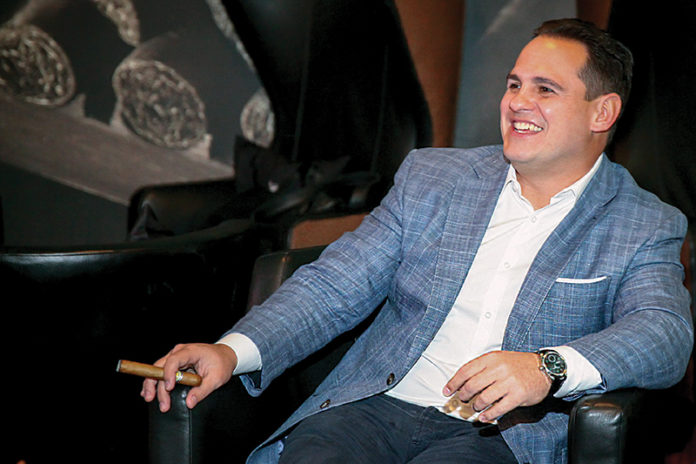 Leading any business venture is difficult, but working with family can present a whole different level of challenges. What makes the premium cigar industry unique is that many manufacturers and brands are led by different families who must find a balance between business and family. This is something Jason Wood, vice president of marketing and sales at Miami Cigar & Co., has come to master over the years.

Even though the foundation had been laid down by his in-laws, Nestor and Mariana Miranda, Wood knew there was much work to be done if the company was going to continue to evolve. His goals for Miami Cigar & Co. were clear: He would take the blueprint provided by the Mirandas and fine-tune the goals and plans they had begun in years past. He wanted to make sure Miami Cigar & Co. continued to be among one of the leading companies in the premium cigar category, and he knew it’d take a lot of work and hustle to achieve that goal.

Find Your Place
“Being able to work with each person in each department not only helped me to understand what they did but who they were,” he says. “In the trenches is where bonds are formed, and I am thankful I was accepted by all of them.”

When it’s time to make decisions that impact the business, Wood seeks feedback from his team before making a final call. As the leader, he has the final say, but learning how to listen to others has allowed him to make better moves through the years. He doesn’t see the value in having the right people on staff if he’s not going to listen to them. On the flip side, he must make the decision that will be best for the overall business, a move that’s difficult when the company’s values are based around teamwork and family.

Since joining the company in 2009, Wood has learned the importance of leading by example while also maintaining a personal connection with his staff. With Nestor Miranda and his leadership style as an example, Wood has come to treat and consider every staff member as a part of his own family. Much like a real family, everyone on his team is willing to go the extra mile because they want to do him proud. This makes syncing up his expectations and goals with those of his team even easier and more natural because there is a familiarity and familial bond in place throughout the company.

Know Your Weaknesses
Leaders also have to take care of themselves in order to be effective in the workplace. Wood stresses the importance of finding balance in life or running the risk of becoming one-dimensional. He has observed many professionals who are great at business but have personal lives that are in need of improvement and who are unable to fully enjoy the benefits of their hard work and grind. Wood enjoys spending time with his wife and children and makes time for them as a way to strike a balance between work and his personal life.

Wood has also grown into his leadership role, becoming more comfortable speaking up when necessary. Early on, he tried to avoid ruffling any feathers, but over time he came to understand that being more vocal would have enabled him to change things for the better sooner. At both Miami Cigar & Co. and his previous entrepreneurial ventures, he worked to overcome mental roadblocks. Now he hopes to transmit that hard-won experience to others in the company and industry.