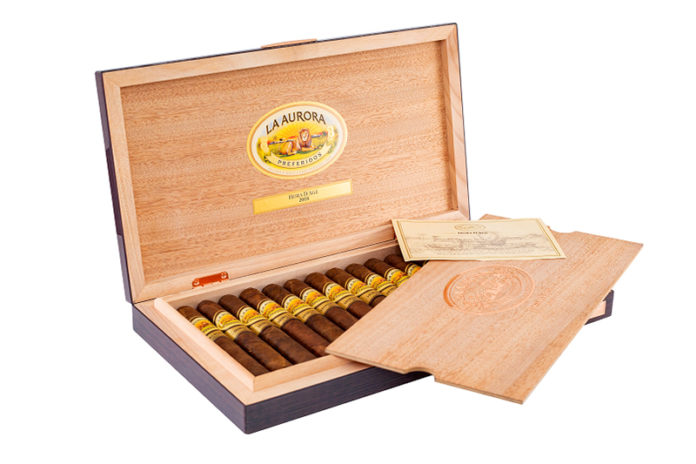 La Aurora Cigars has revealed that Preferidos Hors d’Age 2018 will be a limited release–only 500 boxes of 15 cigars will be released to the U.S. market. It will be available in a single vitola, a Toro measuring 6 x 40. The blend will feature an Ecuadorian wrapper and binder, with filler tobaccos grown in the Cibao Valley, Columbia and Nicaragua. MSRP is set at $22 per cigar and the company is expecting to ship the cigar in September 2019.

“Hors d’Age is a homage to the time-honored practice of extra-aging fine spirits,” stated Guillermo Leon, La Aurora Cigars owner and president. “We have painstakingly selected twelve-year-old vintage tobaccos to once again create what we believe is a spectacular blend. While the amount of available tobacco that meets our criteria to become Preferidos Hors d’Age is very limited, we have what I believe to be one of our greatest achievements in this line. The year noted on each Hors d’Age says when each blend started it’s extra-aging process, as this process ensures complexity and amazing flavor in a blend that is still beautifully refined and true to our defining what Dominican cigars should be.”

Preferidos Hors d’Age will be on display within the Miami Cigar & Company booth during IPCPR 2019.

For all the latest news from La Aurora Cigars, visit laaurora.com.do.