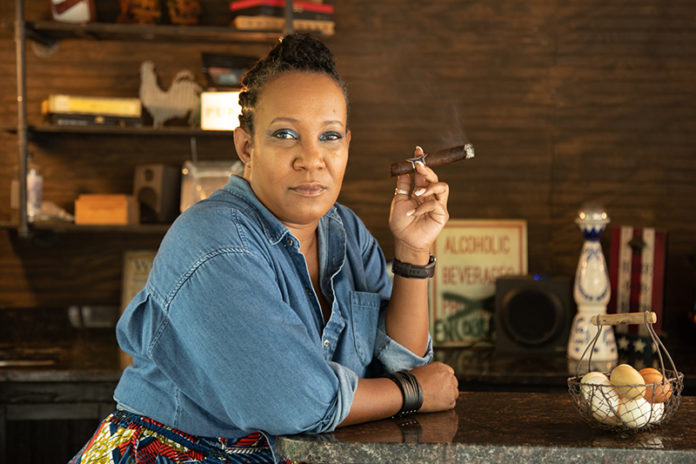 Desiree Sylver is a busy woman. As she’s answering the many questions for this interview, she’s also completing many of the day’s tasks that are necessary to keep her business, Drunk Chicken Cigars, moving forward. The sound of packing tape being pulled from the spool and applied to boxes containing recent orders serves as some sort of industrial musical background noise. She’s also busy making plans for an upcoming event she plans on attending. Multitasking is all part of the game for Sylver, who became one of the latest entrepreneurs to enter into the premium cigar industry with a brand that’s getting a considerable amount of attention and conversation because of its unique name.

Sylver was born in the suburbs of Washington, D.C. She recalls her childhood as being fun. “I feel like we had the best generation ever,” she says. “We were a little bit freer. We didn’t have COVID or things of that nature.”

Long before she launched her cigar brand, Sylver worked in the federal government as a civil servant. With a Ph.D. in organizational leadership, she served as a professor at Strayer University and was an instructor within several different companies. Teaching and being a professor was all part of Sylver’s retirement plan. That is, until cigars came into her life.
Sylver’s ex-husband smoked cigars, and she’d regularly find herself in a cigar lounge for what became their date nights. He’d go into the humidor and would come back with a cigar for both himself and for her. While she didn’t know much about what she was smoking, she enjoyed cigars, so much so that when they divorced, lounges continued to be where she spent some of her leisure time and also learning more about the products she was smoking.

“I was totally shocked when I saw inside a humidor for the first time. I had no idea there were so many different cigars in there,” she explains. “The humidor manager was like, ‘What do you like to smoke?’ I was like, ‘I don’t know, whatever my ex-husband handed me!’ The guy in the humidor explained the wrapper, binder and fillers to me, and explained the different notes and stuff. So I became very interested in trying to learn as much as I could about the cigars and trying to figure out what I liked to smoke.

Sylver’s self-exploration of cigars began nearly seven years ago and has since developed into much more than a hobby—it’s become her business. Sylver shares how her curiosity about cigars helped build a brand that, while small, has every intention of making a big splash in today’s cigar scene. 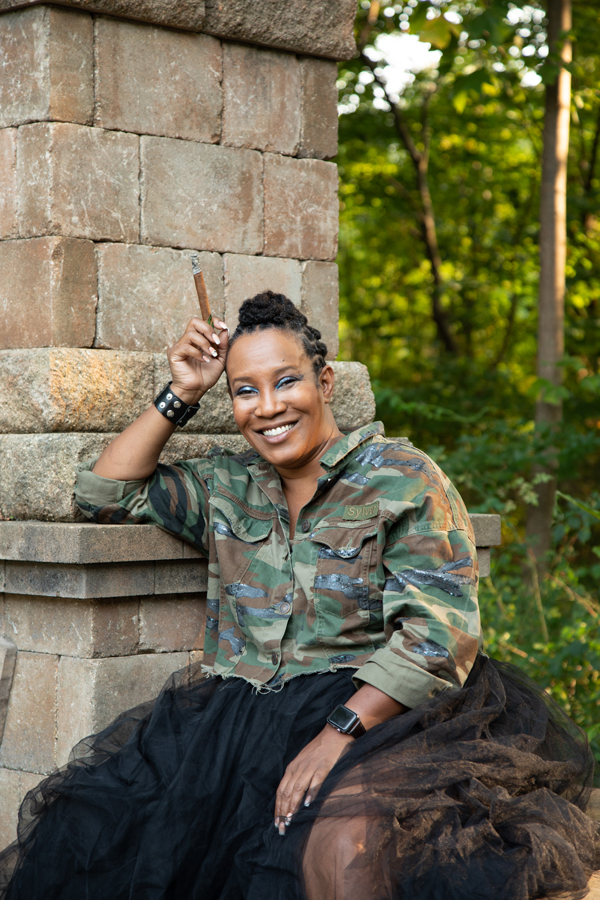 The Good and the Bad
Sylver had no intention of ever starting her own cigar brand. When she reentered the dating scene, her now-fiancé, Rico Reed, also smoked cigars. In addition to traveling together, the two smoked cigars together as well. There was a running joke between them that one of them was going to have to quit smoking because of how many cigars they each smoked each day and how expensive the hobby was becoming. During one of their trips, they came across some cigar rollers who informed them of some current tobacco they had to work with. Sylver and her fiancé explained what they liked and asked the rollers to create a couple of blends for them. Having cigars made specifically for their palates and preferences helped them indulge in something they enjoyed in a more budget-friendly way.

These cigars were inexpensive to make, but the tobaccos used in the blends were very much premium. Now, Sylver and her fiancé had their own cigars to smoke in addition to those that they would buy in the lounges they spent time in. In the lounge, friends would approach the couple and ask them what they were smoking. After telling them it was a cigar they made, they’d offer some sticks as samples. The friends smoked these special blends and would express how good they were and made the recommendation that they try to sell those cigars on their own. Suddenly, a business was born.

“We heard that so much that we started investigating what that would look like,” said Sylver. “We went to some lounges, and the lounge owners would tell us, ‘Yeah, we would sell it.’ From there, we had to figure out what we needed to do. We talked to a lot of lounge owners, tried to figure out what works, what doesn’t work. The constant thing was that we needed to change the bands on the cigars, and so we did that and we’ve been selling ever since.” 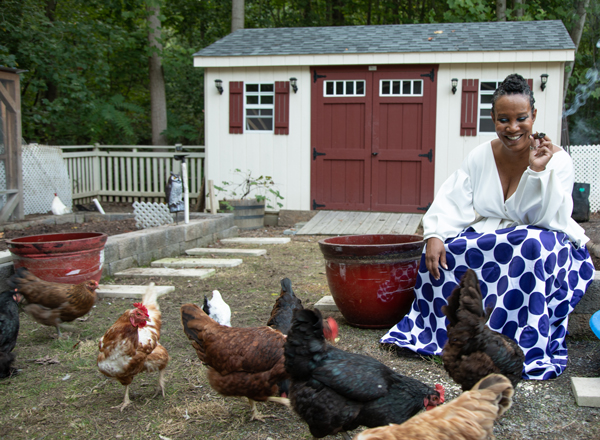 There was much work required to start a new cigar company. Sylver and Rico relied on retailers to help them figure out how to successfully launch their brand. They found that most cigar lounge owners were willing and more than happy to answer any questions they had to ask. As they made tweaks to their brands, Sylver and Rico would go straight to retailers to ask for feedback, seeking both good and bad comments and thoughts.

“I’d never want to hear just the good stuff because if I’m hearing just the good stuff, then I’m never going to be able to make corrections or updates or anything of that nature,” Sylver explains. “I needed to hear everything so that I was aware. I’m an information junkie, and so I just asked a lot of questions, and people were willing to answer the questions.”

Asking other manufacturers for their advice and input on production issues and price point was also part of the process. Early on in her business, Sylver understood how important it was to figure out the manufacturing issues. How much was it going to cost to get future cigars made? Were there any production limitations she needed to be aware of? What shipping time frames should she expect? She knew that her company’s customer service would be defined by how well she would be able to get product to her customers, so these were the crucial questions and problems she needed to solve early on in her business. 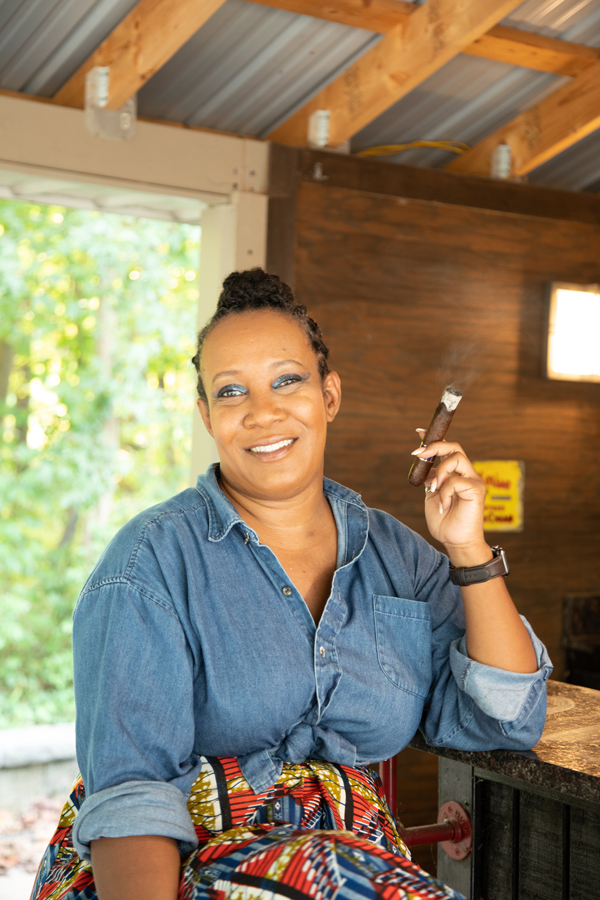 What it Means
Another issue that had to be tackled was what to name their new brand. While speaking with a manufacturer early on, Sylver was asked what she’d name her cigar brand. She told the manufacturer that she and her fiancé were considering calling it Mad Dog or something along those lines. When asked what that name meant to her, she responded it didn’t mean anything; it was just a name.

“He said ‘No, no, no. A name has to mean something! You have to have a story behind it.’ So again, here was another lounge owner and manufacturer being very, very helpful in trying to help us navigate the waters of the cigar industry,” says Sylver. “We sat there smoking the cigars that they made, and he said, ‘Well, you need to come up with another name.’ So we’re sitting there talking, and we both said, ‘Drunk Chicken.’ He said, ‘I don’t know what that means, but that’s the name of your cigars. Tell me the story behind it.’ So we told him that our backyard’s named the drunk chicken and kind of joked about it. He said, “That’s perfect. That’s it. That’s what you should go with.’ He said it made sense to him, and it would make sense to others. And so we did.”