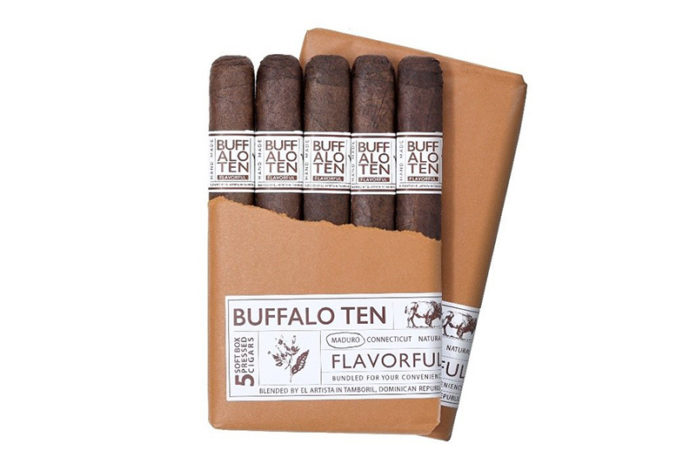 “We feel this is the beginning of a great flagship product line for us,” says Radhames ‘Ram’ Rodriguez, President of El Artista Cigars. “Not only does it smoke great but the whole package looks amazing. We have developed something that we feel cannot be beat.”

Buffalo TEN is described as a complex blend composed of six different tobaccos from across The Americas and Caribbean. Buffalo TEN has a Mexican San Andres maudro wrapper, a rich Dominican Negrito binder, and a filler tobaccos from the U.S., Colombia, and the company’s own fields in the Dominican Republic. Two tobaccos used in this cigar are exclusive to El Artista–Dominican T-13 Hybrid, which is used in the filler, and the binder’s Dominican Negrito.

Buffalo TEN will be available in one size–a soft box-pressed Toro (6 x 50). El Artista will offer the cigar in two different retail packages including a 5-pack ($22.50 MSRP) in a wooden retail shelf display that holds five 5-packs and a single-stick purchase with an MSRP of $4.95 per stick from a 40-count retail bundle tray.