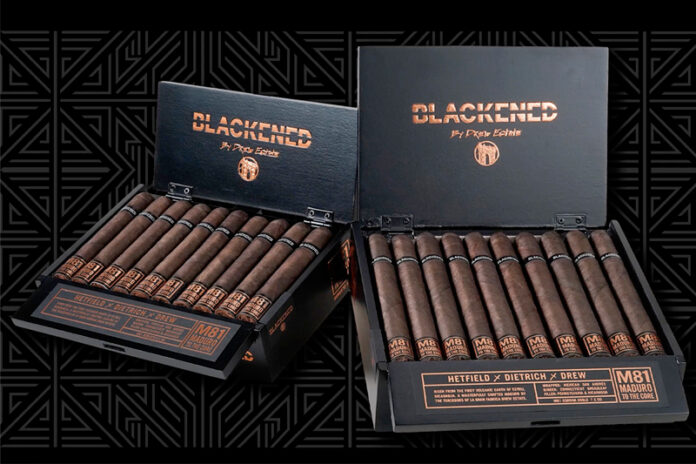 After its initial reveal in September 2022, Drew Estate has begun shipping the highly anticipated BLACKENED Cigars “M81” by Drew Estate to participating Drew Diplomat Program members in the U.S.

“The worldwide release of BLACKENED Cigars ‘M81’ by Drew Estate with Metallica and BLACKENED American Whiskey straight shocked the system of the entire cigar world,” commented Jonathan Drew, founder and president of Drew Estate. “It was like every cigar hotline in North America was blaring red alert as the good people rejoiced with us to celebrate this piece of heavy metal and heavy leaf history. My good homie Rob Dietrich was the connector between Hetfield and myself … after that the energy just went crazy across all teams, mediums and platforms!”

Rob Dietrich, master distiller and blender of BLACKENED American Whiskey, added: “I am stoked to present BLACKENED Cigars ‘M81’ by Drew Estate to the world. It is a heavy leaf cigar that’s all about the taste and the blend. Maduro to the core, BLACKENED ‘M81’ is rich and powerful with alluring notes of espresso, leather and dark chocolate, that will satisfy the most experienced cigar smokers, but it is beautifully balanced so newer cigar smokers can enjoy it too.”