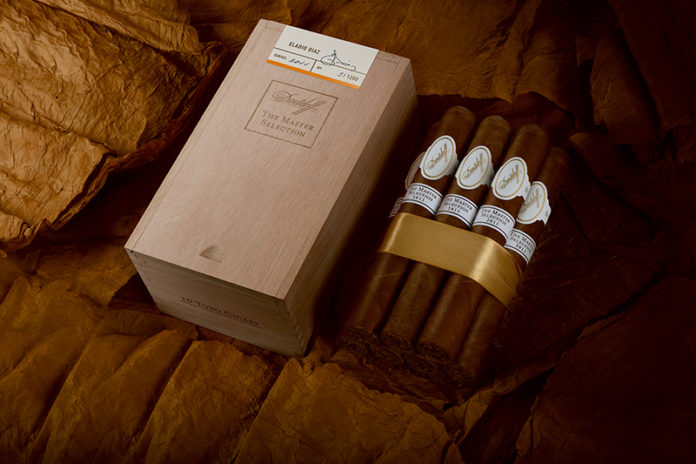 “These Master Selection Series cigars have been crafted by our head Master Blender, Eladio Diaz, to satisfy the most demanding cigar aficionado in the world–himself,” explained Charles Awad, Senior Vice President and Chief Marketing Officer at Oettinger Davidoff AG. “His agreement to release a few of these six very personal and delightful blends that he has been creating to mark his very own birthdays is a treat for Davidoff. These are simply the finest cigars, worthy of the most special of occasions: time superbly filled for those who have the chance and privilege to taste these cigars.”

Appointed Davidoff merchants and flagship stores will be getting different blends of this cigar. Here’s what you can expect form the Master Selection Series:

APPOINTED MERCHANTS EDITIONS
Blended with Nicaraguan tobaccos and a “Habano” Ecuador wrapper – The Series 2013. This cigar is a blend of Nicaraguan tobaccos: Estelí and Condega Visus, Piloto Visus, Piloto Seco and San Vicente Mejorado Visus in a Nicaragua binder with a “Habano” Ecuador wrapper from Ecuador. This beautiful cigar is intense with a strong, rich aftertaste. Spicy pepper flavors give way to sweet, creamy oak wood notes in the second third. Strength: 3.5 out of 5.

Blended with aged Dominican tobaccos and a Mexican binder – The Series 2010. The cigar is a blend of ten-year-old Dominican filler tobaccos Piloto Ligero, San Vicente Ligero and San Vicente Visus, combined with a Semilla A Seco and Estelí Visus from Nicaragua. It comes in a Dominican wrapper with a Negro San Andrés binder from Mexico. It’s the blend of ten-year-old tobaccos in combination with the Nicaraguan filler tobaccos that gives this cigar its cut wood flavor and a distinct sweetness that lingers on the lips, making this a delightfully pleasant cigar. Strength: 3 out of 5.

Blended with Dominican tobaccos and a “Habano” Ecuador wrapper – The Series 2007. The cigar is a blend of Dominican tobaccos: San Vicente Ligero, Piloto Seco, Hybrid Corojo/Olor Ligero and San Vicente Mejorado Visus bound in a Hybrid Olor/Piloto with a “Habano” Ecuador wrapper from Ecuador. Pepper and ginger flavors combine with oak wood to give this cigar its unique taste. Strength: 3 out of 5.