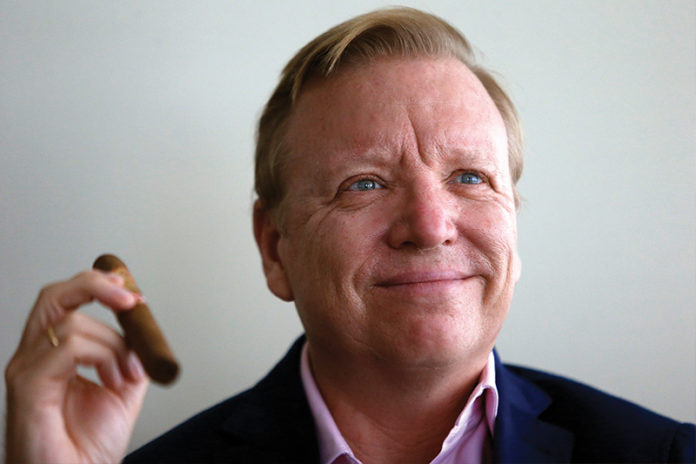 There are some people in life who just get it. We call them naturals. For naturals, it just clicks—the long days, hard work and the often-tiring tasks of whatever it is they do come easily. Like watching Ken Griffey Jr. swing a baseball bat or seeing Michael Jordan make a jump shot, you know a natural when you see one.

For the past five years, the Cigar Association of America (CAA) had a natural at the helm: Javier Estades of Tabacalera USA, who served as the CAA’s chairman. Javier’s caring personality, willingness to serve others and deep understanding of our industry all contributed to his success as the CAA’s chairman. And make no mistake, Javier served as our chairman during a rough and tumble time for our industry while simultaneously running one of the most successful premium cigar companies in the world. His affable demeanor and steady hand have been critical to our continued efforts. As his time as chairman comes to a close, we owe him a great deal of gratitude.

Excelling at a Challenging Post
The CAA is a national trade association representing cigar manufacturers, importers and distributors, as well as other major suppliers to the industry. The organization takes pride in working on behalf of the entire industry. Originally founded in 1937, the CAA can trace its roots back to other predecessor organizations that were founded before the turn of the last century. The CAA is the oldest advocate for the cigar industry, but being an organization with a deep history and a diverse set of members can bring its challenges. There are strong, opinionated leaders at every company we represent. Each company has its own perspective and particular business needs. Many of our major companies are old, family-run businesses at which children have taken the reins from their fathers, who had taken the reins from their fathers before them. The roots run deep, you could say.

During his time as chairman, Javier has navigated all of these challenges with ease, in large part simply because of the kind of person he is. He always makes time for you. He always greets you with a smile. His personality is infectious and charming. No detail is too small for him. Many times over the last five years, I have seen Javier dive deep into the details of planning our industry’s annual retreat in Florida, but rarely is he preoccupied with his own role or remarks. Instead, he is always focused on making sure the CAA’s members feel welcome, comfortable and ready to enjoy their time together. Whether he’s passing out cigars or making sure a cocktail is topped off, Javier takes care of the people he loves, and no task is menial to him.

That level of commitment and care helped him build deep relationships that have allowed him to navigate the demanding personalities of our industry. It’s also what makes him such an effective advocate for us in Washington, D.C.

Throw the Script out the Window
Not unlike dealing with the industry, dealing with the top brass in Congress can be challenging. You must be able to read the room, know the environment and adapt to the differing personalities you meet. I have never seen anyone do this as flawlessly as Javier Estades. It starts with his willingness. Despite running a global company, Javier always makes time to come to Washington. He would meet with anyone and fiercely advocate for our industry while doing so—and, to be honest, he did not need much help in doing so.
A lot of work goes into preparing for congressional meetings. There are briefings and talking points, frequently asked question documents, and carefully thought-out responses to key questions. But with Javier, you could often count on him to throw the script out the window and just speak from the heart.