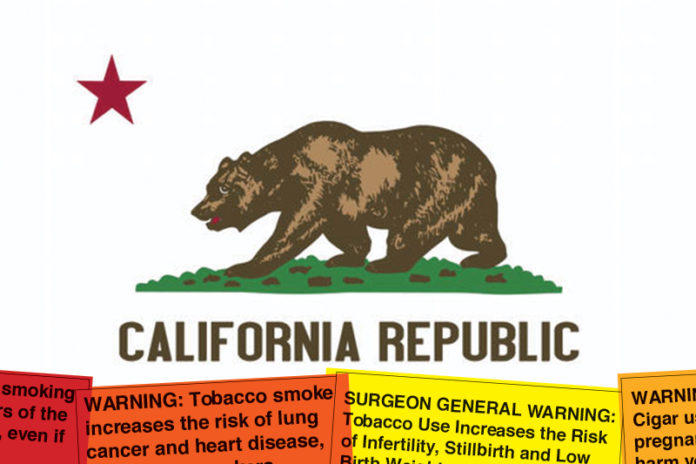 Under the U.S. Food and Drug Administration’s (FDA) final rule deeming tobacco products to be subject to the Federal Food, Drug, and Cosmetic Act (known more commonly as the agency’s “deeming regulations”), the FDA expanded its regulatory authority over several tobacco products, including cigars and pipe tobacco, as well as e-cigarettes and vapor products. In response, members of the industry were required to comply with a host of upcoming compliance deadlines, including the implementation of new health warnings on product packaging and advertisements by Aug. 10, 2018. Said requirement put a particular strain on the cigar industry, as under the deeming regulations manufacturers are required to rotate six separate health warnings on all cigar packaging and advertisements under a warning plan required to be submitted to the FDA.

However, through a letter issued by Deputy Attorney General Harrison M. Pollak on April 11, 2018, California is now declaring that if cigar manufacturers comply with the requirements of the deeming regulations’ new health warnings and use a particular warning related to birth defects, such products will comply with the product labeling requirements mandated under Proposition 65. Under Proposition 65, manufacturers and retailers of consumer products are required to notify consumers through on-product labels and/or through signs posted at retail locations if said products contain chemicals known to the state of California to cause cancer, birth defects or other reproductive harm. However, almost in lockstep with the FDA’s release of the deeming regulations, the state of California amended Proposition 65 in August 2016 to require manufacturers to list the specific chemical(s) within their products that were known to cause cancer, birth defects or other reproductive harm, to be fully implemented on all relevant product packaging by Aug. 30, 2018.