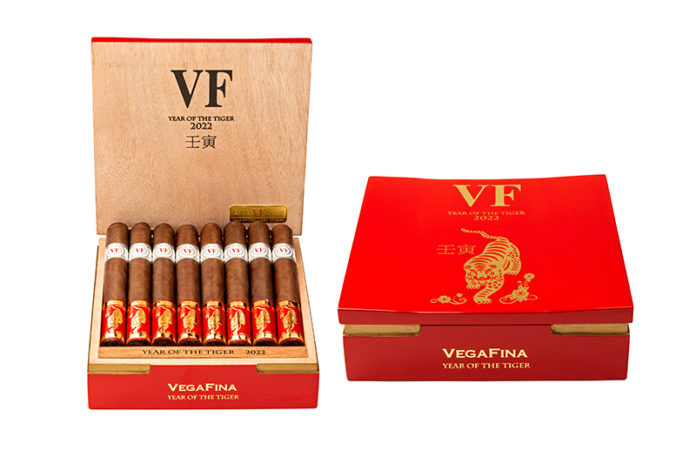 Inspired by the zodiac sign for 2022, VegaFina is releasing Year of the Tiger to select retailers in the U.S. This exclusive limited edition cigar celebrates the Chinese New Year with a special cigar that made its debut at this year’s Tobacco Plus Expo (TPE) trade show this past January.

VegaFina, a brand owned and distributed by Altadis U.S.A., has released a cigar annually for four years in recognition of the Chinese New Year. These premium cigars have all been handmade and featured an exclusive blend of tobaccos grown in the Dominican Republic, Nicaragua and Ecuador. This year, the VegaFina Year of the Tiger 2022 is a limited edition premium cigar presented as a Toro measuring 6 1/8 x 52. The cigar comes packaged in 16-count boxes that have an MSRP of $175.20 with each cigar having a manufacturers suggested retail price of $10.95.

For its blend, VegaFina’s blenders chose an Ecuadorian Habano wrapper that envelops a Nicaraguan binder and a combination of Dominican and Nicaraguan filler tobaccos. This is a medium-bodied cigar that has intense notes of tobacco, spice, pepper coffee and roasted almonds. Cigar smokers can expect other flavor nuances from the VegaFina Year of the Tiger including wood, spice and a sweet aftertaste with nut, chocolate and coffee notes.

The VegaFina Year of the Tiger cigar comes in packaging that is designed to draw the attention of cigar smokers. The cigars come in eye-catching pagoda shaped boxes with a red design and golden details that pay tribute to traditional colors used to celebrate the Chinese New Year. Every 16-count box has two layers of eight cigars–inspired by the lucky ‘8’ number in China. The packaging is carefully finished with VegaFina’s standard band and a striking tiger designed band on the foot of the cigar that complements the box.

The VegaFina Year of the Tiger ships to retailers beginning in the second week of February 2022.