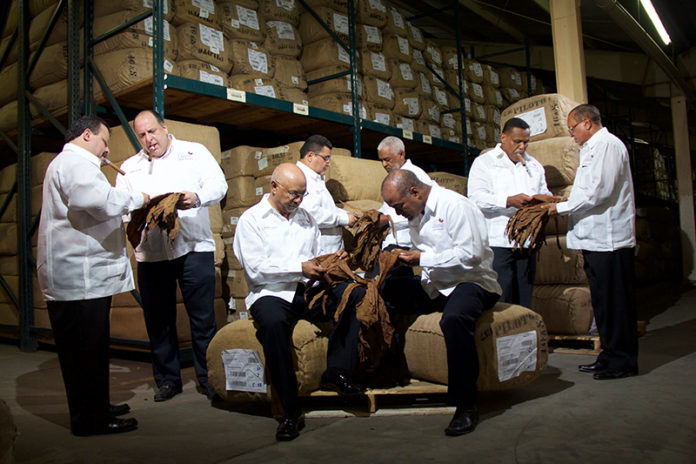 Montecristo, Romeo y Julieta, H. Upmann, VegaFina, Henry Clay—these are all premium cigar brands that have a long history steeped in tradition, and they are among just a few of the cigar lines made at Tabacalera de Garcia, one of the world’s largest cigar factories. Located in the free zone park of La Romana, Dominican Republic, this factory employs 5,000 people responsible for making some of the world’s most sought-after and recognized premium cigars. Tabacalera de Garcia marks its 50th anniversary in 2019. It is a factory that has evolved along with the tobacco industry over the past five decades and manufactures the premium cigars for Altadis U.S.A., Tabacalera USA and its parent company, Imperial Brands. 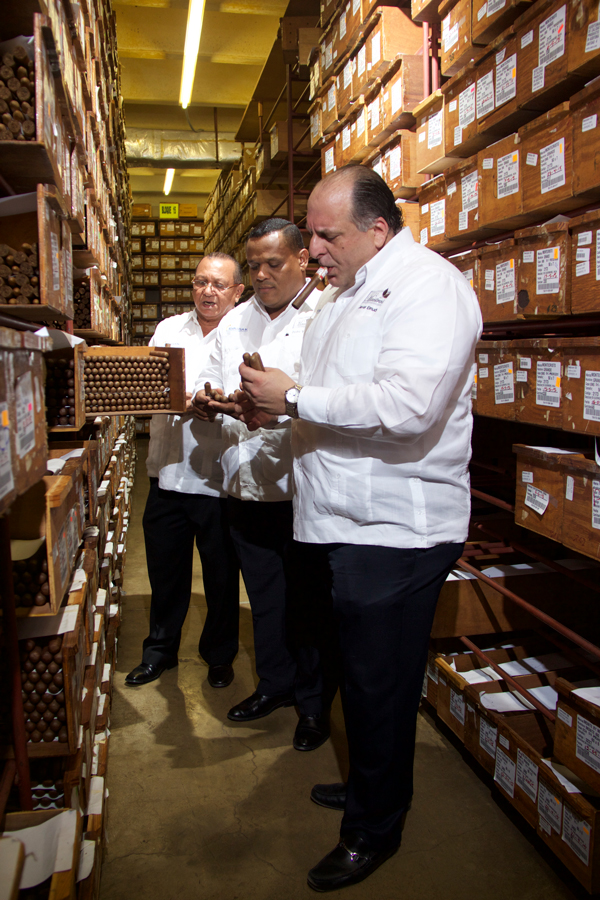 From the outside, Tabacalera de Garcia appears to be your ordinary, run-of-the-mill factory. Located just outside the posh Casa de Campo resort, a gated entry and nondescript white and maroon sign greets visitors. It’s when you pass through the gates and enter the building that you see and experience the true magic. The factory is bustling with activity—piles of tobacco fill one room, where tobacco is re-humidified; there’s the sorting room, where leaves are separated and arranged by size and color; rolling tables that appear to go on past a visitor’s line of vision occupy one room, and boxes stacked to the ceiling with different tobacco blends fill another. While tobacco is front and center at Tabacalera de Garcia, it’s the people who are handling it, sorting it, rolling it and carefully preparing each cigar to travel across the world that provide the life and spirit that runs through the factory’s veins.

“The experience, passion and commitment of our people combined with probably one of the best tobacco leaf inventories in the industry and the continuous support and integration with our sales and marketing teams across all the markets—without any doubt, these are the main areas that have made Tabacalera de Garcia a success through the years,” explains Javier Elmudesi, manager of Tabacalera de Garcia.

Elmudesi is part of the superstar team that keeps Tabacalera de Garcia running smoothly and efficiently. He relies heavily on the expertise of the Grupo de Maestros, an elite group of cigarmakers and blenders that have each worked at the factory for decades: packing and box-making manager, Carlos Travieso; leaf tobacco manager, Nestor Rodriguez; and quality manager, Victor Avila, have all worked at the factory for over 40 years each; and production manager Pedro Ventura has spent over 20 years at the factory. These men work closely with Yasemin Ozoncul, who serves as the head of cigar product development. Elmudesi and Ventura also work with the factory’s manager, Dr. Regine Wolfgramm. Together, this group leads and guides the factory’s artisans and skilled workers who each contribute to the prestigious legacy and history of Tabacalera de Garcia. 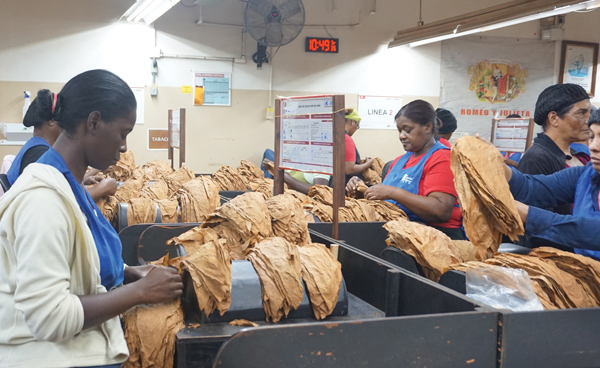 The Evolution
When the factory opened in 1969, it was just a 165,000-square-foot facility with a wrapper-sorting operation. Fast forward to 2019 and the factory’s footprint has increased to 675,000 square feet, and it now produces nearly 40 million handmade cigars a year. In addition to handmade cigars, the factory also produces machine-made cigars, an operation that runs 24 hours a day, resulting in an astonishing 1 billion cigars that are distributed to the mass-market channel annually.

“The machine-made cigar operation at Tabacalera de Garcia started in the early 2000s. We began as a small operation, and today we have 2,500 employees combined [that] not only produce natural wrapper, machine-made cigars, but we also have a big bobbin operation where we cut all the wrapper for the production of machine-made cigars for one of our factories in Puerto Rico,” Elmudesi explains.

Tabacalera de Garcia did not become one of the largest premium cigar factories in the world overnight. Like many businesses, it has grown and scaled over time and refined its operations to get to where it is today. In the beginning, it wasn’t at all the cigar factory it is today. The primary business of the factory was sorting tobacco, with a focus on mild Connecticut Shade-grown wrappers. Owned at the time by Consolidated Cigar Corp., a subsidiary of Gulf and Western Industries, Tabacalera de Garcia didn’t enter the handmade cigar category until 1972.

When Gulf and Western decided to divest itself from tobacco in the early 1980s, the factory’s ownership changed several times before it ➤ was sold to French-owned SEITA in 1999. SEITA itself went through a merger with Tabacalera S.A., a Spanish company, which created Altadis S.A. It was this merger that led to the creation of Altadis U.S.A., which distributes Montecristo, Romeo y Julieta, H. Upmann and other brands in the United States. Currently, Altadis is part of Imperial Brands. It was this series of acquisitions that brought onboard the flagship brands of Montecristo and Romeo y Julieta to Tabacalera de Garcia that have helped to increase the factory’s legacy throughout the years. 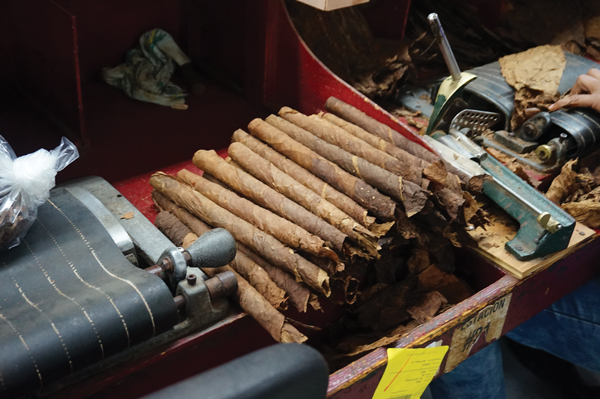 A Legacy of Quality
Though 50 years have passed, some things have remained the same at the factory, including how it handles handmade cigars. Ventura, who oversees the factory’s premium cigar operations, reveals that there is equipment used at the factory that helps to improve the overall quality of the cigars by measuring humidity in the tobacco and to ensure the right temperature and humidity levels are maintained in the factory’s aging room. What has remained the same since those early days of the factory, however, is the handmade approach that has made Montecristo and Romeo y Julieta among the leading premium cigar brands in the industry. It’s the Grupo de Maestros—consisting of Ventura, Rodriguez, Avila, Travieso and Elmudesi—that has kept the handmade tradition alive through the years and helped establish Tabacalera de Garcia as a powerhouse in the premium cigar field. Another key factor in Tabacalera de Garcia’s many years of successful cigarmaking is the top-quality tobacco the factory sources from around the world.

“Without any doubt, being able to use tobacco from all the different parts of the world gives us the ability to blend extremely good-quality tobaccos from different origins and thus produce great and complex handmade cigars for our markets. This is very important for our business,” Ventura explains. 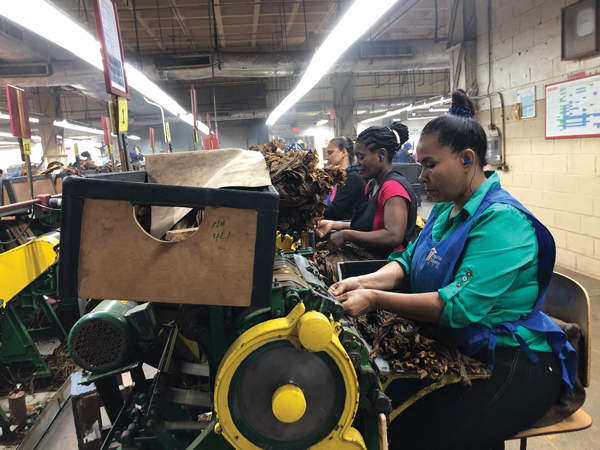 Ventura and others at Tabacalera de Garcia take pride in the fact that the factory has remained in business and grown throughout its 50-year history. In addition, it has served as an important business not just for the cigar industry but also for the Dominican Republic as a major employer in the area. Tabacalera de Garcia led the way in the Dominican Republic as a free zone company, which allows it to operate and do business in the country with certain perks while bringing new jobs and offering a product that will be shipped across the world. After Tabacalera de Garcia opened its doors in 1969 under the free zone concept, other cigar factories followed, establishing themselves in the northern part of the island, specifically in the Santiago de los Caballeros area. Thanks in part to the success of Tabacalera de Garcia and the other cigar factories that have followed, the Dominican Republic’s cigar industry serves as second-largest category of employment in the country outside of tourism.

When asked what has contributed to Tabacalera de Garcia’s 50 years of success, Ventura replied that it wouldn’t be the number of cigars the factory makes each year, but instead it would be the quality the factory produces year after year. While the factory is big, it operates like 12 small boutique factories, with each department and employee playing a special and unique role in the cigars they make. While the number of cigars that come out of Tabacalera de Garcia on an annual basis is impressive, none of that would matter if the quality of the cigars wasn’t consistent. The factory, its products and the quality wouldn’t be celebrating 50 years of business without the passion and love shown on a daily basis by the men and women working diligently within Tabacalera de Garcia.