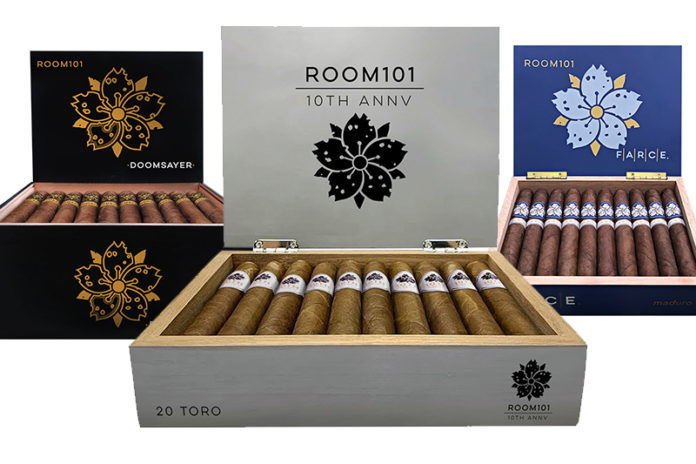 Room101 has steadily been building its portfolio of premium cigar products and becoming a boutique company to watch in the industry. For this year’s International Premium Cigar & Pipe Retailers Association (IPCPR) trade show and convention, Booth has several new releases planned to mark his decade in the industry and Room 101’s place in it.

Booth has announced the release of the Room101 10th Anniversary Cigar, a release that commemorates his 10th anniversary in the cigar industry. It was back in 2009 when Booth first launched his own cigar brand under the Room 101 name with the help of Camacho Cigars. 10 years later, Booth has since left Camacho [read more here] and branched out more on his own, working closely with Robert Caldwell and La Barba Cigars’ Tony Bellatto to form Down and Back, LLC, a company that distributes today’s Room 101 cigar brand.

The Room101 10th Anniversary Cigar is being rolled at AJ Fernandez’s cigar factory in Estelí, Nicaragua. Booth revealed to Cigar Aficionado that the cigar would be made with a Nicaraguan Rosado wrapper. It will be available in one size–Toro, 6 x 52. It will come in 20-count boxes with a MSRP of $10 per cigar. This will be a limited release with only 500 boxes being released.