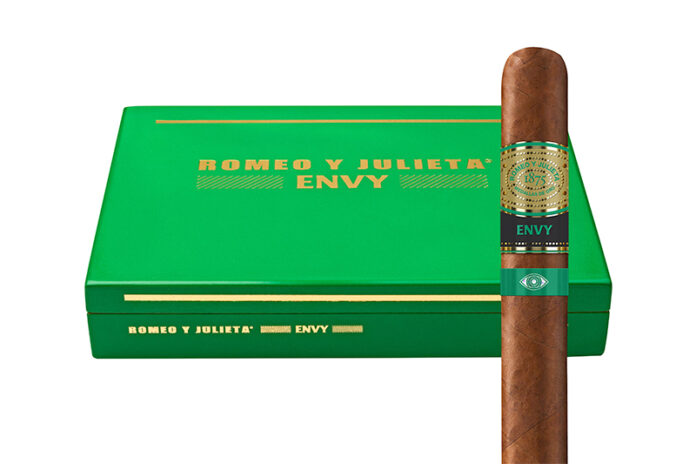 The new Romeo y Julieta Envy is a well-crafted cigar that showcases an assortment of sweet flavors such as dark chocolate, nougat and molasses, which complement its earthy essence. These flavors are followed by a clean natural sweetness that gives way to a sublime buttery finish. Romeo y Julieta is made by the Plasencia family and is described by Altadis U.S.A. as being a “well-balanced, medium bodied smoke, with wrapper, binder and filler all from Nicaragua.”

“This blend was in the making for quite some time because we knew the aging process would bring out amazing notes from these Nicaraguan tobaccos,” says Rafael Nodal, head of product capability. “Once perfectly aged, the rest was a matter of finding the ideal size to capture and display them to the fullest! So here it is, this cigar is absolutely fantastic!”

This cigar will be presented in a vitola named Amulet. The makers of this cigar state at the eye amulet is an ancient symbol that’s said to keep away bad energy. When designing the band for the Romeo y Julieta Envy, the amulet symbol was included in the band as a way of making the cigar the smoker’s own personal amulet.

“Love has its shadows,” reads the evil eye shaped vitolina inside the striking green Romeo y Julieta Envy cigar box. “It can inspire envy. Capturing what triggered that emotion, our signature mix of quality, skills, and passion, have transformed that feeling into a unique smoking experience built around opulent aromas and luscious notes.”