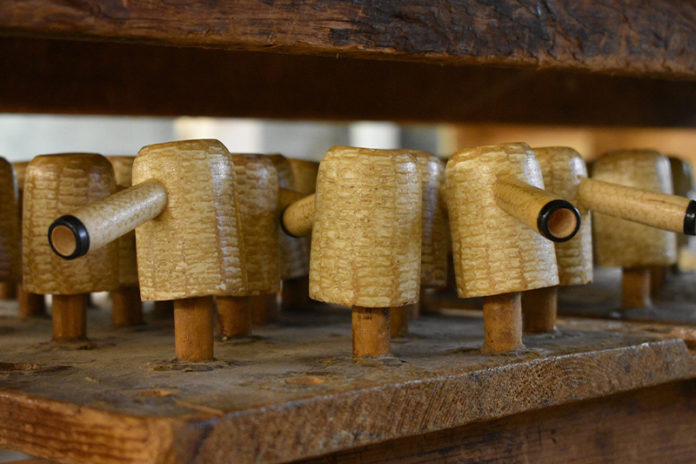 Mom. Baseball. Apple pie. These three things have traditionally been viewed as the quintessential essence of the United States. By 1860, the phrase “as American as apple pie” was already in use. By World War II, when asked why they were fighting in the war, American GIs often responded, “for mom and apple pie,” and the phrase became “as American as mom and apple pie.” Baseball and hotdogs—and Chevrolet, for that matter—got thrown into the mix in 1974 when an advertising campaign declared Chevys “as American as baseball, hotdogs and apple pie.” One wonders what Chevy had against mothers. Of course, like so much iconography and lore, these sayings aren’t exactly steeped in fact. Apples aren’t native to the United States—they were brought over by the Pilgrims in 1620. Baseball is a derivative of the old folk games called “base ball,” “goal ball,” “round ball,” “fetch-catch,” “stool ball” or “base” coming from early Britain, Ireland and continental Europe. Sorry, Abner Doubleday. And it would be a small world indeed if the good old U.S. of A. owned the monopoly on motherhood. Like so much of American culture, these quintessentially American icons have origins outside of the U.S. and are borrowed from other cultures or, like motherhood, are universal. 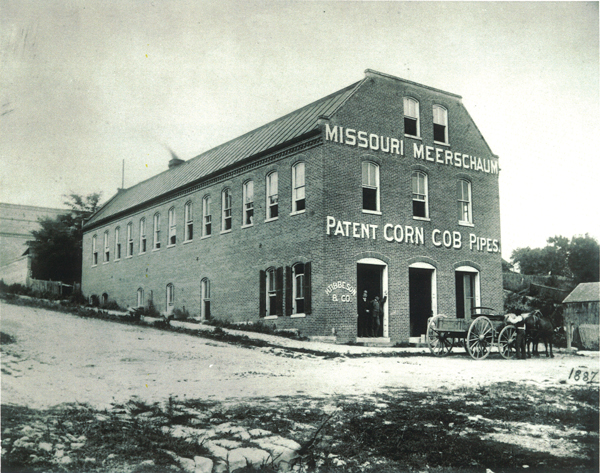 While searching for something that is completely and originally American in nature, one could do no better than to consider the corncob pipe—corn, after all, is native to the Americas. While the exact date that a person first thought of a corncob as a good smoking instrument is lost in history, we can thank Henry Tibbe, a Dutch immigrant living in the small Missouri River town of Washington, Missouri, as the first person to think of making a business out of turning corncobs into pipes. That company, which he named Missouri Meerschaum Co., has become synonymous around the world with corncob pipes, much in the same way that Kleenex is used to describe all tissue paper or Xerox is used to describe printing documents. Indeed, does it get any more American than an immigrant coming to the country and establishing a successful business—one that has been in continuous operation since 1869?

Establishing a Business
Washington, Missouri, a historic town of approximately 14,000 people, was initially settled in the late 18th century, when the area was under the control of the Spanish Empire, who established a fort and trading post at the location. The land later became a possession of France before becoming a part of the Louisiana Purchase. Nestled on the banks of the Missouri River, the town became an important transportation and commerce center in eastern Missouri. According to its Wikipedia page, Washington possesses more than 400 buildings that have been placed on the National Historic Register, but it is the town’s association with Tibbe that has made it famous as the “Corncob Pipe Capital of the World.” 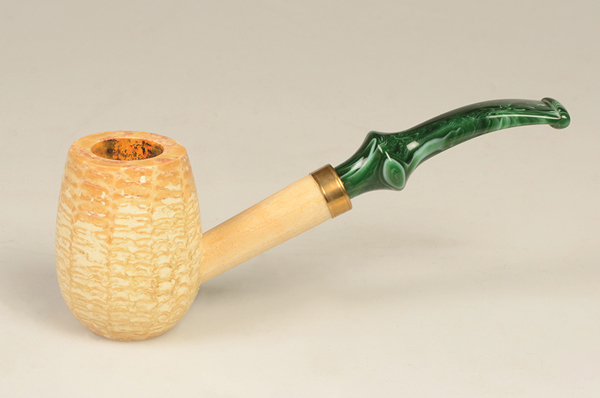 Tibbe had initially settled in St. Louis before moving to Washington to establish a carpentry business. Legend has it that either a local farmer or a trapper traveling along the Missouri River asked Tibbe to turn a corncob pipe on his lathe in 1869. Whoever it was appreciated the cool and sweet smoking qualities that a corncob pipe offered and thought that Tibbe might be able to produce a better corncob pipe made on a lathe rather than whittled using a jack knife. The result was good enough that word spread about Tibbe’s talent with corncobs, and others soon began asking the Dutch expatriate to make pipes for them.

Tibbe and a friend who was a chemist also developed a plaster of Paris exterior coating to place on the pipes to protect them during use. Tibbe’s corncob pipes became so popular, in fact, that his carpentry skills were no longer needed for cabinets or furniture—he could support himself solely on making corncob pipes. Less than a decade after turning that first corncob pipe on his lathe, Tibbe filed a patent for corncob pipes with the United States government, and H. Tibbe & Son Co. was born. By 1907, the Tibbe family changed the name of the company to Missouri Meerschaum Co., thus associating corncob pipes with the Turkish clay meerschaum pipes that were especially popular in the late 19th and early 20th centuries. By the 1920s, Missouri Meerschaum corncob pipes were available nationwide, and soon distribution took on a global scale. Other corncob pipe factories popped up in Washington and the surrounding area, and the town became a hotbed for corncob pipe production.

“It was just one of those serendipitous things for Washington and Franklin County to become the corncob pipe capital,” says Phil Morgan, Missouri Meerschaum Co.’s general manager. “It was a coincidence that Tibbe moved to Washington and that individual came through the town and asked him to make the corncob pipe. I think the reason that it stayed in Washington is from the marketing efforts and a good supply of employees to make the corncob pipes. There were as many as 12 corncob pipe companies in the area at one time. Every one of them was started by a Missouri Meerschaum Co. employee who thought he could do it better or by outside businesspeople who thought they could make a quick profit. Luckily, we were the first, and we are the last.” 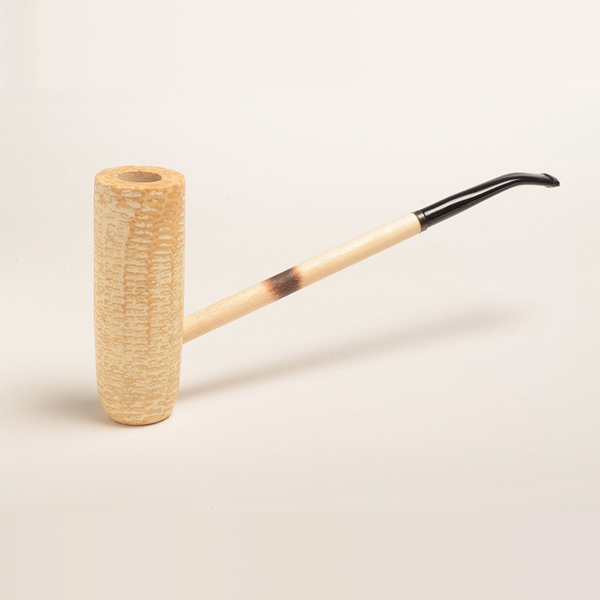 With such a strong connection to the area, when Missouri Meerschaum Co. marked its 150th anniversary in 2019, the company wanted to make sure it included the local community in the celebration. As the anniversary approached, Morgan and the rest of the Missouri Meerschaum Co. staff began planning for it two years in advance. The factory includes a museum that is open for all to visit, but very rarely are tours of the production area given to the general public. Last year was an exception. In April, the company held an open house for local residents to tour the factory and learn about their town’s association with corncob pipes. In October, Missouri Meerschaum Co. hosted another open house for the pipe community and invited pipe clubs from all over the world to travel to Washington and help the company celebrate the birth of corncob pipes. The event included a pipe tobacco blending seminar with representatives from Cornell & Diehl and STG-Lane Ltd., as well as the production of a special series” of the 150th Anniversary corncob pipe.

“We brought back the old Bulldog shape that we began making in the late 1800s and quit making in the 1980s,” explains Morgan, who has worked at Missouri Meerschaum Co. for 11 years. “It’s a difficult pipe to make from a corncob. People had been asking us to bring it back one day, and they lovingly call it the ‘Corndog.’ We brought it back in three versions. Bully; Franklin, for Franklin County, where Washington is located; and Classic Bulldog. We had imprinted on the shanks on each of those pipes ‘150 Years’ so people would know that it was the pipe for the 150th anniversary.”

Living History
What visitors saw on those rare factory tours was a process that has remained largely unchanged since Tibbe first carved a pipe out of a corncob in 1869. Making a corncob pipe all begins with the corn that’s grown near Washington. Missouri Meerschaum Co. owns approximately 150 acres of land where it grows its yearly corn crop using a special heritage seed developed by the University of Missouri that produces larger cobs from which more pipes can be carved. The cobs are harvested, and the grain is shelled from them before they are placed in storage for at least two years to dry. What makes corncobs such a great material for smoking pipes is the woody ring inside the cob. The drying process hardens the woody ring, which makes it durable and virtually impervious to damage caused by heat or flame. The pith, or center of the corncob, is drilled out, revealing the woody ring from which the tobacco chamber is created. The woody ring’s walls are thick, which necessitates the larger corncobs that Missouri Meerschaum Co. uses regardless of how big or small the finished pipe will be.

“We want to make that woody ring as thick as possible so that there is good structural integrity there,” Morgan explains. That’s why our corncob pipes can last for as long as briar pipes.”

The cobs are graded by size. While the company would love to have every cob be large enough to make the big Freehand or MacArthur pipes, which fetch higher prices on the retail market, only about a third of the yearly crop produces such large cobs. Two-thirds of the cob production yields cobs large enough for the miniature and mid-sized corncob pipes, such as Missouri Meerschaum Co.’s best-seller.

No matter the size, every Missouri Meerschaum Co. corncob pipe has a certain amount of handwork. The larger pipes, from the Country Gentleman on up, are shaped by hand on a lathe with a shaping knife. Morgan estimates that as much as fifty percent of the yearly pipe production is completely done by hand. All of the corncob pipes have a plaster of Paris substance rubbed by hand onto their exteriors, and the stems are fitted by hand as well.
Despite a certain amount of handwork on all of the corncob pipes Missouri Meerschaum Co. produces, prices for its pipes rarely exceed $30. The miniature pipes begin at $4. Most of the company’s pipes are priced in the $8 to $15 range. The larger pipes, which require more handwork and use a higher grade of stem material, are priced in the $20 to $30 range, making Missouri Meerschaum Co.’s pipes completely affordable for pipe smokers of all experience and income levels.