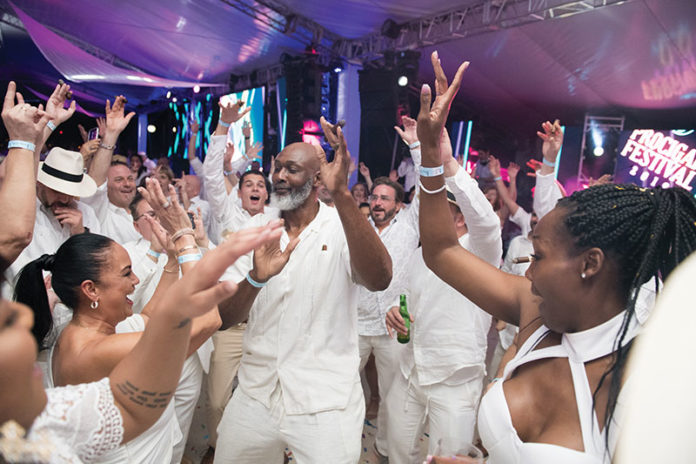 Since 2008, Procigar, the association of Dominican cigar manufacturers, has hosted a celebration of all things connected to the cigar industry in the Dominican Republic. Dubbed the Procigar Festival, the weeklong celebration has been a winter haven for cigar enthusiasts from around the world as they flock to the island of Hispaniola to explore the Dominican Republic’s beautiful countryside and to experience firsthand the culture that goes into making so many of the world’s most popular brands. While the annual festival attracts many people from within the cigar industry, it also provides consumers with the chance to see, experience and engage with the many professionals who are responsible for some of the world’s most highly rated and highly regarded premium cigars.

The 12th annual Procigar Festival began on Feb. 17 at the Casa de Campo resort in La Romana, which is home to Altadis’ monstrous Tabacalera de Garcia factory. Running three shifts every day throughout the year, Tabacalera de Garcia employs approximately 5,000 people who make both machine-made and handmade premium cigars, including brands such as Montecristo, Romeo y Julieta and H. Upmann. This year marks a special anniversary for Tabacalera de Garcia: 50 years ago, Charles Bluhdorn, chairman of Gulf and Western Corporation, opened Tabacalera de Garcia, and Altadis is celebrating the half-century milestone throughout 2019. 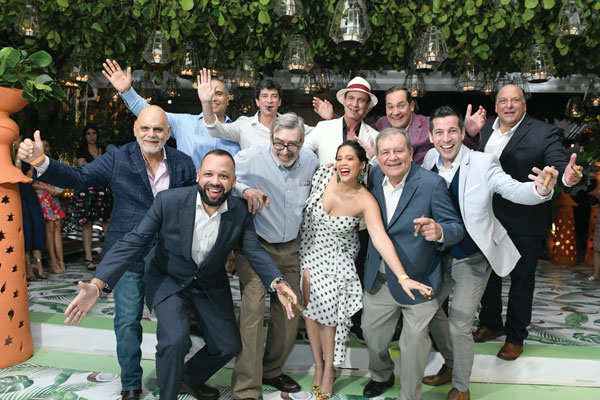 Following a cigar-tasting seminar during a catamaran cruise to Saona Island on Feb. 18, the company hosted a beachside dinner during which it presented guests with its special 50 Anos cigar made using one of the first blends created at the factory for the Montecruz cigar brand. Made from an Indonesian wrapper, Dominican Olor binder, and Dominican Piloto, Dominican Olor and Connecticut Broadleaf filler tobaccos, the cigar offered guests an opportunity to step back in time to the birth of Tabacalera de Garcia and to appreciate the progress both the company and the Dominican cigar industry have made in 50 years.
“The Procigar Festival is one of the best weeks of the year for us,” says Tabacalera de Garcia’s manager, Javier Elmudesi. “We wanted to make something really special for our guests this week that, for now, was only available at that dinner.”

The next day, Feb. 19, Procigar Festival attendees toured the Tabacalera de Garcia factory and witnessed firsthand the operation of one of the world’s largest premium cigar factories. While on the tour, guests learned about Tabacalera de Garcia’s Maestros de Cigarros program, which allows employees to be nominated for advancement by their peers.

Nominees undergo two rounds of rigorous training and education that lasts 14 months. If they pass the exams they are required to take at the end of their training program, the nominees earn the title of Maestro de Cigarros. They are then given special perks inside the factory and have the opportunity to represent the factory at international events. There are currently 57 Maestros de Cigarros working at Tabacalera de Garcia, and each year a fresh crop of nominees begin the program.

“We heavily invest in our employees’ ongoing training program through Maestros de Cigarros,” Elmudesi explains. “It gives them an incentive to what they’re doing today and gives them a goal to shoot for tomorrow. They have more engagement and more pride in their jobs, and the finished cigars benefit from it. It’s an employee empowerment program and another step of quality control for our factory.” 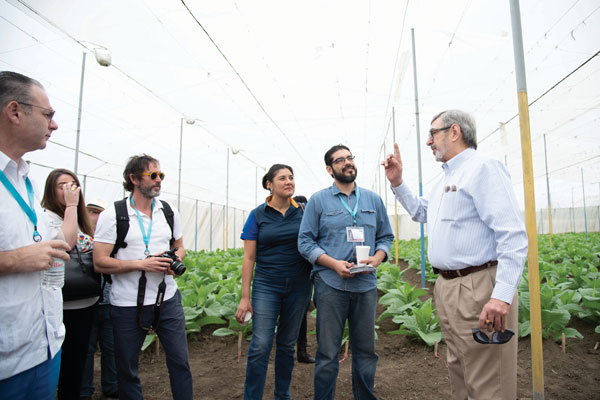 On to Santiago
After the Tabacalera de Garcia tour, guests traveled by bus to Santiago de los Caballeros, the heart of the Dominican cigar industry, for three days of cigar factory and tobacco field tours, more educational seminars and lavish dinner celebrations. Santiago is home to dozens of premium cigar manufacturers, tobacco growers and assorted companies that support the factories, including box and cigar band manufacturers and factory equipment providers.

Guests could participate in a cigar and whiskey pairing seminar, partake in a charity poker tournament, compete in the second edition of the Dominican qualification tournament for the Cigar Smoking World Championship, enjoy a day at the beach or participate in any number of company tours. While Tabacalera de Garcia is based in La Romana, all the other Procigar members are based in and around Santiago. The member companies are Quesada Cigars, La Aurora, General Cigar Dominicana, Tabacalera Palma, De Los Reyes Cigars, PDR Cigars, Tabacalera La Alianza/EPC Cigars, La Flor Dominicana, Davidoff Cigars and Arturo Fuente Cigars. Throughout the festival’s three days in Santiago, guests could experience a number of factory or farm tours at any of these companies, or they could visit the Cigar Family Charitable Foundation and House of Dreams.

“Santiago is the most complete tobacco cluster possibly in the world,” says Quesada Cigars’ Manuel Quesada. “You can get everything you need to start a cigar factory and make a cigar here in Santiago, and you don’t have to go anywhere else. The Procigar Festival is the culmination of Procigar’s efforts to represent the Dominican Republic around the world and grow the Dominican cigar industry. We are proud to show off our products and present to festival-goers how we live, our culture and how we make cigars.” 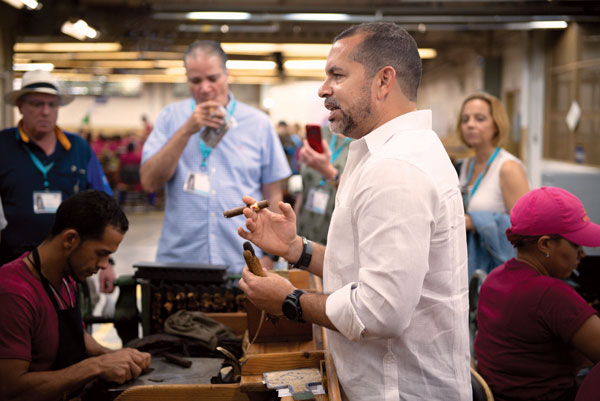 Clearly the world enjoys the way that Dominicans make cigars. Dominican cigar and tobacco companies account for approximately 130,000 direct jobs, and Dominican cigars—both handmade and machine-made—account for roughly 10 percent of all Dominican exports and contribute approximately $800 million to the country’s economy annually. Despite efforts worldwide to curb tobacco enjoyment, the Dominican cigar industry is maintaining its pace and even growing, thanks in large part to new opportunities in European and Asian markets that had once been dominated by Cuban cigars.

Following the tours each day in Santiago were seminars and events that festival-goers could attend. The most notable was the Cigar Smoking World Championship Qualifier, which has grown in popularity over the years. The event is now in its 10th year, and smokers from around the world compete to see who can smoke a Mareva-sized handmade cigar for the longest amount of time. It may sound like an easy task, but it requires far more skill and finesse than one might expect. This is the second year that the qualification tournament was held during the Procigar Festival. This year’s winner was Argentinian Alberto Ianardi, who won with 128 minutes of total smoking time. 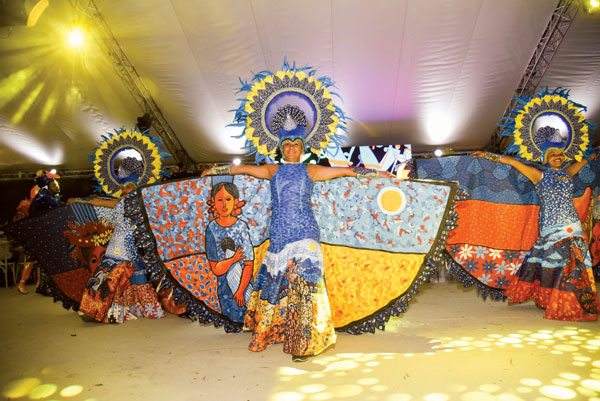 Giving Back
The festival ended with a gala dinner and its annual auction raising money for charitable causes that benefit children and senior citizens. This year, the auction raised more than $175,000 through an assortment of unique and rare items, including special cigars available only at the event. During the dinner, the Dominican Senate recognized Tabadom’s Hendrik “Henke” Kelner for his contributions to the Dominican Republic through his work in tobacco that has “advanced peace, progress and happiness and asks for a more reflective, nicer and more respectful world.”

In their presentation to Kelner, the Dominican senators touched on the entire point of Procigar’s existence. In the 1990s, when the Cigar Boom threatened to tear apart the industry through intense competition, poaching employees from other factories and rushed products damaging the reputation of Dominican cigars, a handful of Dominican cigar manufacturers met to work together in establishing practices and methods that promoted the entire country’s cigar industry. While still competing on the international market, the Procigar members promoted peace among themselves and worked diligently to build the infrastructure that has enabled the Dominican cigar and tobacco industry to thrive since Procigar’s founding 26 years ago.

“Procigar has been working tirelessly behind the scenes to ensure that the industry will be strong and thrive in spite of all the efforts going on around the world trying to kill the cigar industry,” says E.P. Carrillo Cigar Company’s Ernesto Perez-Carrillo, who was honored during the festival for making the top cigar of 2018 in Cigar Aficionado’s top 25 cigar list.

“We work together for our own good and for the good of our country. It serves as an example to our employees and others that there are some things that are more important than the bottom line. The business aspect is one thing, but at the end of the day we want to do it because we believe that cigars are something that bring people together.”