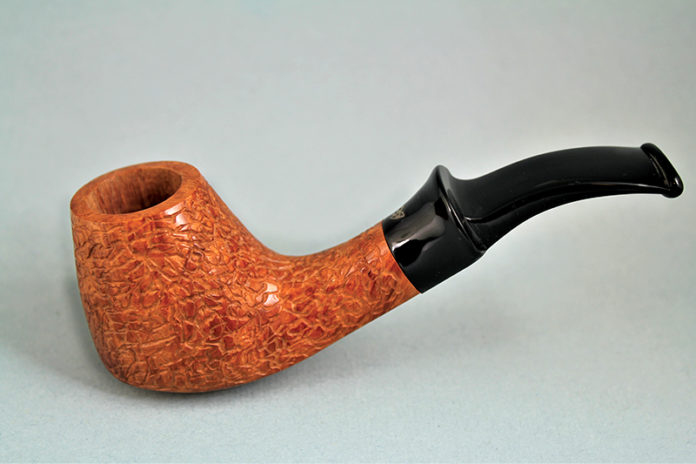 Luigi Viprati says that he’s retired, but he has a damn funny sense of retirement. While he’s no longer putting in the daily grind of work each day to produce the 1,500 or so pipes he used to make each year, he’s still committing a good amount of his time inside his small workshop in Pontoglio, Italy, refining the art he loves most. Instead of donning his fishing cap or buying a set of golf clubs, Viprati is spending his “retirement” passionately pursuing and perfecting the craft for which he has become world-famous—and he is now aiming to produce just 100 pipes of his best quality each year. Anyone who has had the pleasure of meeting the Italian pipemaker, who is now in his mid-60s, wouldn’t expect anything less from him.

“When a passion hits you when you are young, you cannot help but be fascinated by it for your whole life,” Viprati says. “I think a pipe is a special lifelong companion and it has been very satisfying to know that my pipes have been, and continue to be, greatly appreciated by pipe smokers worldwide. This only makes me want to push myself harder to improve my pipemaking ability and continue this passion until the very last of my days. How I can dream of something and then get it made still excites me, even though I’ve been doing it for so long. I didn’t like to make classical shapes, but I am more excited now so that I can make special things—pipes that haven’t been done before.” 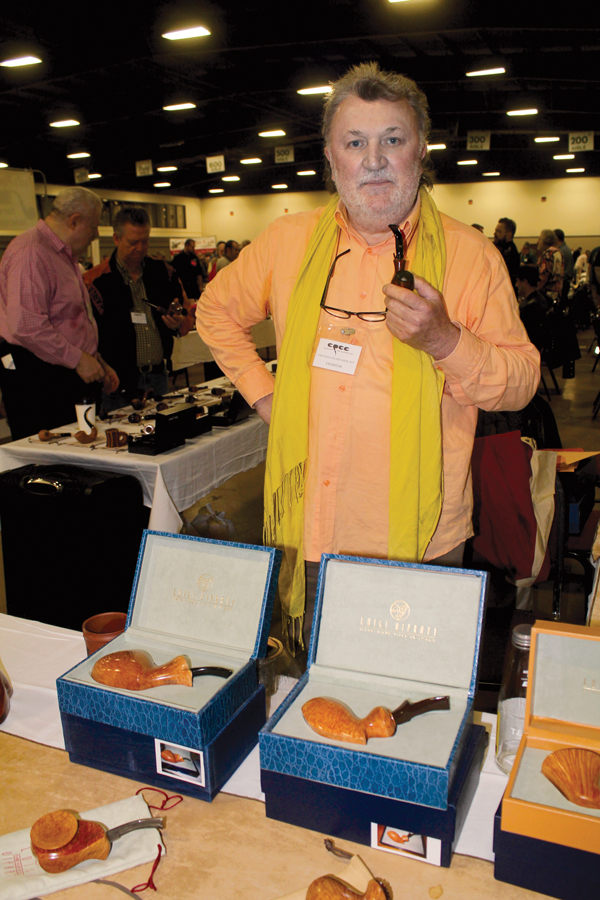 The Passion Begins
Viprati possesses an artist’s soul. The walls of his small workshop are covered with samples of his colorful, cubist-inspired oil paintings. He makes his own grappa and sausages, and he regales visitors to his studio with ample samples of both, mixed in with plenty of humorous stories about his life and his career. Always drawn to creative pursuits, it’s been the world of making pipes—which Viprati has done for 47 years—in which he has won his fame.

Viprati began his career as a pipemaker during his compulsory service in the Italian military in 1972. While on leave, he bought a piece of briar and carved a pipe for himself just for fun, but as the pipe took shape, Viprati found himself more fascinated with the process, and a passion was born. After finishing his military service, Viprati found himself carving more pipes to use himself or to give to family and friends. During this phase of his career, he studied the briar available to him and became an expert carver of the classic shapes, though these mostly bored him. He’d much rather create shapes inspired by his own imagination and creativity. In 1984, he began a pipe brand and etched “La Pipa di Viprati” on each pipe he made. Soon after, he met Alberto Paronelli, the founder of an Italian pipe museum, who encouraged him to dedicate his work to creating high-quality smoking instruments. After meeting Paronelli, Viprati never considered any other career.

“I have made many pipes over the years, which have made many pipe smokers happy,” Viprati says. “But I am most happy when I can create really high-quality pieces with unique shapes and interesting adornments or color combinations because I see these as a true expression of my art.” 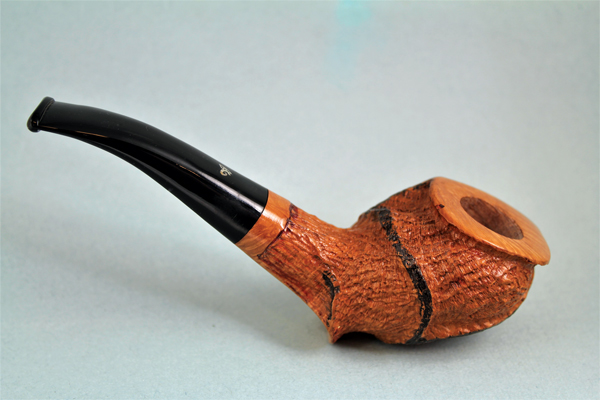 Great pipes cannot be created without excellent quality briar. Throughout the years, Viprati has placed such importance on obtaining the best briar available that he regularly went up into Italy’s forested mountains in Sicily, Calabria and Tuscany with the briar harvesters to be the first to pick through the harvest and select the best pieces for himself, including some of the largest briar roots cut from the earth. After selecting the briar boles he wished to purchase, he also discussed with the briar cutters how he wanted his briar to be cut into blocks, preferring larger ebauchons that routinely gave him more options when it came time to carve them into pipes. Once he had returned to his workshop with a ready supply of briar, Viprati always set aside the best in his inventory because he knew that it would be those briar blocks that would yield the super high-quality pipes he really wanted to make.

“A good pipemaker tries to follow the briar and understand the grain,” Viprati explains. “I start with an idea, and the briar tells me what it wants, and I adapt the idea. I use only Italian briar from Tuscany, Calabria and Sicily because Italian briar is the best. The most important thing is who cuts it—he has to be clever to cut it the right way. You can have the best piece of briar and cut it the wrong way, and then it is [crap].” 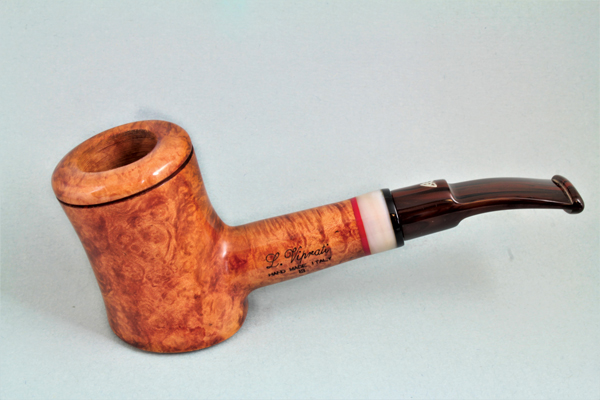 Viprati in ‘Retirement’
Having once produced pipes of various grades with smooth, rusticated or sandblasted finishes, Viprati’s current production is now focused on making just the three top-quality lines of Straight Grain, Collection and Ciro’s Collection—all featuring mostly smooth finishes and using those special briar pieces that he has set aside over the years. Ciro’s Collection includes pipes that were inspired by commission pipes Viprati made throughout the years.

These offer beautiful birds-eye grain, are typically smaller pipes and are the rarest of Viprati’s production. The Straight Grain series is made up of mostly classically inspired simple pipe shapes made from briar blocks that offer beautiful straight-grain wood. Pipes in the Straight Grain series are often smaller pieces as well. The pipes that make up the Collection series are separated into three grades: Silver, Gold and Platinum. All of the pipes in the Collection series are made with Viprati paying close attention to the grain and creating interesting and new shapes while paying homage to the traditional pipe styles and techniques. For the Silver Collection pipes, Viprati focuses his creativity on the shape. For the Gold Collection, Viprati selects larger briar pieces and carves more classically inspired pipes that bring out the best birds-eye patterns in the wood. The Platinum Collection pipes represent something a little more personal for Viprati.

“The Platinum Collection pipes come from a selection of pipes that I have made in the last 15 years, and a lot of them belong to my private collection,” Viprati says. “They are my beloved creations, which better express my infinite passion for pipes. These pipes were carved from very precious briar, and they come with a personalized case.” 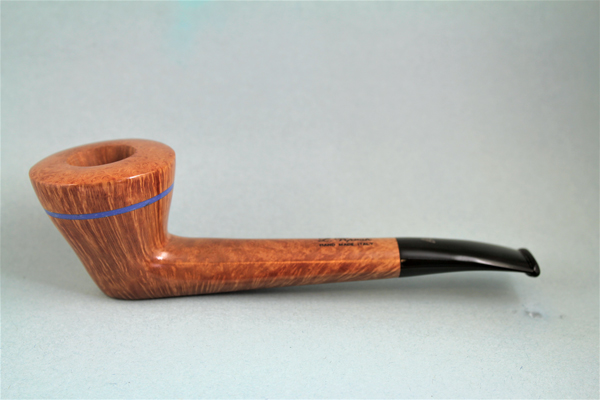 Viprati uses the same level of care and expertise when it comes to designing his pipes’ mouthpieces or choosing adornments to decorate his artwork. He fashions his mouthpieces from acrylic rods, horn or amber. He decorates some of his pipes with silver, gold, different woods, jade and bamboo, or various other materials, depending where his muse takes him.

“Making pipes is a passion for me,” Viprati concludes. “The passion comes from the opportunity for artistic expression that briar can convey through pipes. Each piece is different, and the challenging part of making pipes is in the combination of using my imagination and craft to shape nature’s work into something beautiful. What more could an artist desire?”