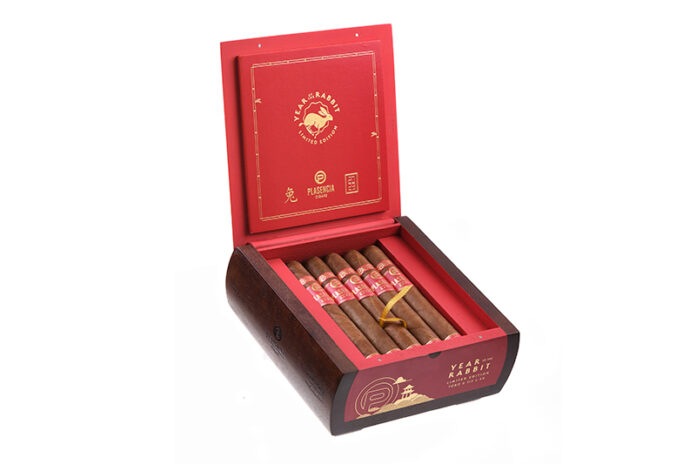 Plasencia Cigars is releasing a limited edition cigar, The Year of the Rabbit, to celebrate the Chinese New Year. This cigar will be available in just one size, a 6 1/2 x 54 vitola. Only 6,000 boxes of Year of the Rabbit will be produced in total with 3,000 boxes being reserved for the U.S. market.

In the Chinese Zodiac, the Rabbit is a symbol of longevity, peace and prosperity. Seen as being both gentle and elegant, the rabbit is admired for its ability to adjust to different conditions, a trait admired by the Plasencia family.

“The Rabbit represents the perfect animal for these changing times for its ability to adjust during various times with grace and elegance. I would also like to emphasize that since the rabbit is a symbol of longevity, our tobacco also improves over time to achieve those incredible flavors. We strongly feel that “The Year of the Rabbit” cigar brand will accurately represent the Chinese New Year,” commented Nestor Andres Plasencia, CEO of Plasencia Cigars.

The Year of the Rabbit is described as being a Nicaraguan puro that uses tobaccos from the various Plasencia farms within the country. The Plasencia Year of the Rabbit is a mild to medium-bodied cigar that is described as being “perfectly balanced and impeccably constructed.” This cigar was blended to match the redeeming features of the rabbit, such as its gentleness and its elegance. This cigar has notes of nougat, green tea, cedar and cardamom.

Plasencia Year of the Rabbit will come packaged in 10-count boxes, with each cigar having a suggested retail price of $52 and each box having a price of $520.

For additional information on this and other releases from Plasencia Cigars, visit plasenciacigars.com.