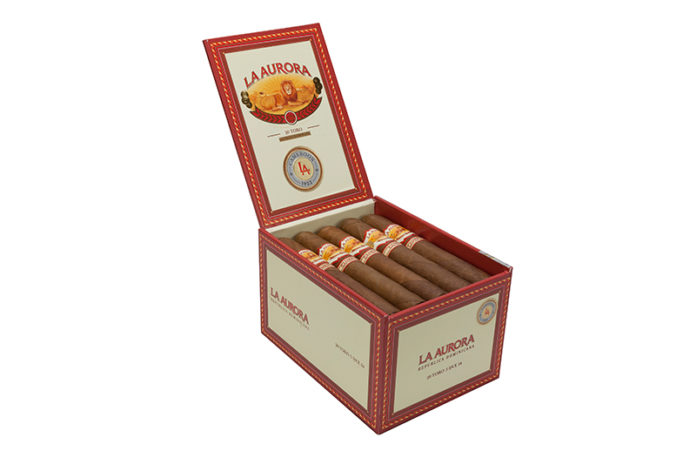 La Aurora has begun to ship the La Aurora 1903 Cameroon. This new cigar is a line extension of La Aurora’s “time capsule” series which includes the 1962 Corojo and 1987 Connecticut. The years of these blends are significant in that they correlate to the year La Aurora began working with the respective wrapper each cigar uses.

La Aurora 1903 Cameroon not only celebrate the year that La Aurora first began using the Cameroon wrapper but 1903 is also the inaugural year of the company itself. The La Aurora Cameroon 1903 features a Cameroon wrapper, Sumatra Ecuadorian binder, and filler tobaccos from the Dominican Republic and Nicaragua. This cigar will be available in four vitolas: Robusto (5 x 50), Toro (5 3/4 x 54), Churchill (7 x 47), and Gran Toro(6 58). The Leon family, celebrating 113 years in the tobacco business, first created the time capsule series as a way to thank its customers who helped the company reach its momentous milestone. The La Aurora Cameroon 1903, like the other cigars in the time capsule series, will be offered at an affordable price point of $5.75 to $6.25.