As part of J.C. Newman Cigar Company’s 125th anniversary, El Reloj was restored to its former glory in 2020. As part of the renovations, a new three-level cigar museum was constructed that houses an interactive theater showing old cigar films. The space can also host large events that the public can rent out. Guided tours are offered daily, and a new rolling school within the factory will give visitors a chance to learn how to blend and handroll their own cigars.

The goal of most of the renovations was to highlight the historic charm and elements that had been part of the building since it was first built. There was also an effort to modernize some of the building’s features and to make it welcoming to all who take advantage of the opportunity to visit it today.

There’s a lot to discover within El Reloj, including some of the factory’s original wooden cigar molds that have been turned into wall art, old doors and flooring that was saved and reused in the bathroom remodel, and the factory’s original clock face from 1910 on display in the lobby. The museum includes old cigar boxes, marketing tools and exhibits that detail the factory’s history, from its early beginnings in Cleveland, Ohio, to the company’s cigar factory expansion in Nicaragua. On the second floor, visitors can learn more about Ybor City and its significance to the Tampa cigar industry. There are plenty of video presentations featuring members of different generations of the Newman family speaking about cigars and the family’s history.

The third floor showcases the art of cigar making and is where the handrolling factory is located. Referred to as the “factory within a factory,” it’s here where almost all processes of the cigar making process—from sorting to stripping and the actual rolling of the cigars—takes place.

“J.C. Newman’s historic El Reloj cigar factory is the premier destination for cigar enthusiasts in the United States,” Newman states. “It is our privilege to continue our family’s four-generation legacy of handcrafting fine cigars since 1895. Our family’s one goal is to continue our family business for another four generations and 100 years. We hope that cigar enthusiasts from around the world will visit our historic El Reloj cigar factory in Tampa to experience the American cigar tradition.”

This story first appeared in the July/August 2022 issue of Tobacco Business magazine. Members of the tobacco industry are eligible for a complimentary subscription to our magazine. Click here for details. 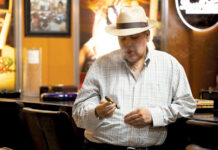