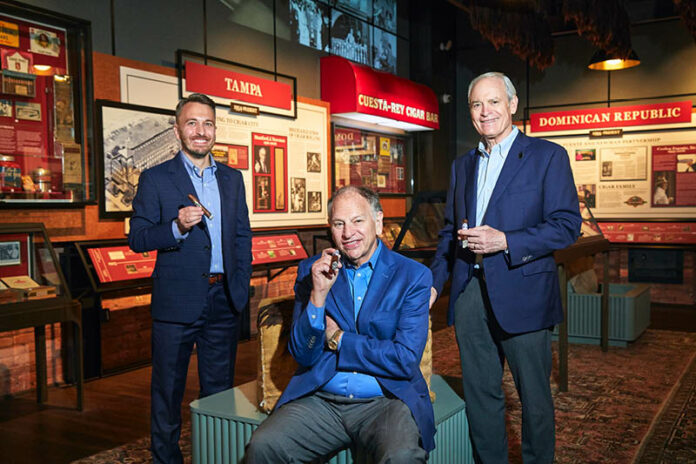 For J.C. Newman Cigar Company, its history and the stories that come from it are at the core of its business. It was back in 1895 that Julius Caesar “J.C.” Newman rolled his first ever cigar within the family’s barn located in Cleveland, Ohio. When he was just 14 years old, Julius became a cigar maker apprentice. His mother paid $3 per month toward his apprenticeship, wanting her son to learn all he could about the cigar industry. After he completed his apprenticeship, Julius spent three years working as a journeyman cigar maker. A recession led to him losing his job, but it didn’t kill his dream of working in the cigar industry. He decided to start his own company, which would later come to be known as J.C. Newman Cigar Company.

The early days of J.C. Newman Cigar Company were filled with obstacles and challenges. In 1895, he launched his business by building his own cigar table using some old boards and borrowed $50 to purchase tobacco that would be used to complete his first order, which was placed by the family’s grocer for 500 cigars. The first brand out of J.C. Newman Cigar Company was called “A.B.C.,” an acronym for “Akron, Bedford and Cleveland,” the name of a local streetcar line.

Relocating J.C. Newman Cigar Company to Tampa brought the company closer to the center of the U.S. cigar industry at that time and also brought them closer to Cuba, which is where the bulk of the tobacco they imported came from. Before making the move to Tampa, Stanford had been sent to the city to find the perfect location for the company’s cigar factory. Stanford found a location within Ybor City, a Tampa neighborhood that was founded by Vincent Ybor in 1886 and made into the city’s cigar making district.

J.C. Newman Cigar Company settled into its new home in Ybor City within the Regensburg factory, built in 1910. Regensburg was one of the last large cigar factories ever built in Tampa, and it became known by its nickname, El Reloj, which is Spanish for “The Clock.” Those within Ybor City grew accustomed to hearing the hourly chimes from the factory’s tall brick clocktower.

Then and Now
At one point in time, Tampa was home to 150 cigar factories. Today, El Reloj is the last of these cigar factories still in operation. El Reloj is listed on the National Register of Historic Places as part of the Ybor City National Historic Landmark District. In 2019, it was announced by J.C. Newman Cigar Company that El Reloj would be undergoing a multimillion dollar factory expansion and renovation. In addition to improving some of the utility of the factory—including upgrading its aging infrastructure and its shipping and receiving capabilities—the company wanted to turn the factory into a tourist destination for cigar enthusiasts in the U.S. By opening the doors of El Reloj to the public, J.C. Newman Cigar Company hoped to make the cigar making process more transparent and educational.

“When El Reloj was built in 1910, newspapers wrote that it was ‘the largest and finest cigar factory in the world’ with capacity for 1,000 cigar workers. Newspapers said that El Reloj ‘embodied every convenience, in fact, every luxury known to modern commercial construction’ and ‘represented the highest type of factory building,’” states Drew Newman, fourth-generation cigar maker and general counsel for J.C. Newman Cigar Company.

He continues: “El Reloj is a prime example of the typical Tampa cigar factory, which is a brick building oriented from east to west with three stories, a basement and a tower. What distinguished each factory was the length of its building and any ornamental features. Tampa cigar factories share the same architectural features for two reasons. This design was thought to be ideal for cigar manufacturing because it maximized the amount of natural light. Also, it allowed the same job to be located in the same place in every factory, making it easier for workers to move between factories. In the basement, we cure and ferment wrapper tobacco. We also have aging rooms both for tobacco and for cigars. Our offices are on the first floor along with our shipping department. On the second floor, we sort tobacco, remove stems using antique machines from the 1910s, roll cigars using hand-operated antique cigar machines from the 1930s and pack cigars using antique machines from the 1930s. On the third floor, we roll cigars by hand and also blend our filler tobaccos.”