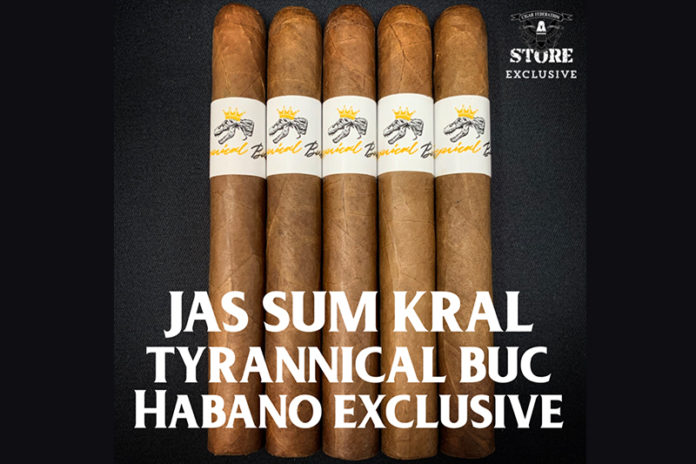 With the success of the broadleaf maduro and the Connecticut Shade Tyrannical, Jas Sum Kral is now prepared to release the JSK Ecuadorian Habano Tyrannical Buc.

“This is our greatest Tyrannical Buc release ever. The tobaccos are some of the most legendary stuff I’ve ever worked with,” commented Riste Ristevski, owner of Jas Sum Kral.

JSK Ecuadorian Habano Tyrannical Buc will feature an Ecuadorian Habano wrapper, Nicaraguan binder grown in Jalapa. It will have filler tobaccos from Condega, Esteli, and Pennsylvania (USA). The cigar is described as medium-strength, full-bodied with a creamy flavor and notes of coffee, pepper, brown sugar and wood. The cigar will be available as a 6 1/2 x 50 toro made at Tabacalera de Argon.

JSK Ecuadorian Habano Tyrannical Buc will be an exclusive release available only online at the Cigar Federation store as well as 2 brick & mortar locations–Ezra Zion Cigar Lounge att Marker Cellars and Ezra Zion Cigar Bar at Trinity Street. This will be an exclusive release, limited to just 2,500 cigars that will come in custom 5-packs that will also come with a detachable Tyrannical Buc embroidered patch. MSRP is $49.95 per 5-pack.

You can get this cigar by clicking here. For all the latest news from Jas Sum Kral, visit jassumkral.com.