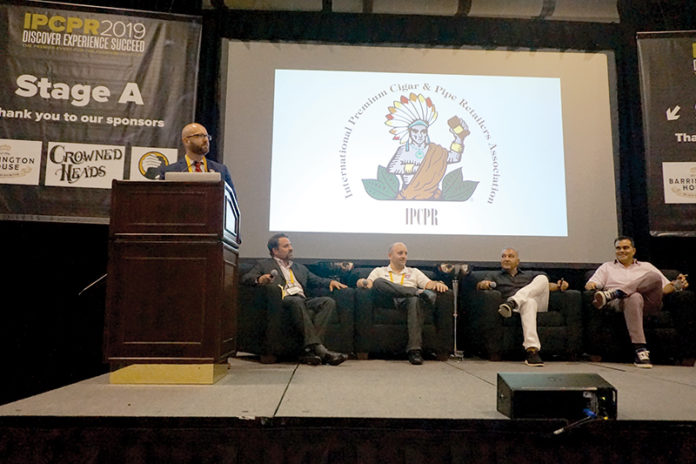 Whenever the International Premium Cigar & Pipe Retailers Association (IPCPR) meets for its annual trade show and convention, there’s always plenty of news to report. New product launches, updated packaging for already existing cigars and smoking accessories, updates on the legal battles being waged on smoking and tobacco products on the federal and state levels, and seminars that share sales and marketing tips to help improve retail tobacconists’ businesses are all regular fare during the three-and-a-half-day IPCPR trade show and convention.

To be sure, the 2019 IPCPR show—held from June 28 to July 2 at the Sands Expo Convention Center in Las Vegas, Nevada—provided plenty of new product launches and informative seminars as it always does, but this year the trade show kicked off with the IPCPR announcing that it would rebrand itself in order to improve its ability to represent premium tobacco manufacturers and retailers on Capitol Hill and inside the nation’s 50 state legislatures, offer more value to its members by increasing educational opportunities, and open the trade show floor to consumers for a single day.

What’s in a Name?
The IPCPR’s executive director, Scott Pearce, announced that the organization would be changing its name to the Premium Cigar Association (PCA). Pearce explained that the rebranding comes in a changing political and legislative landscape that is now facing the premium tobacco industry. Pearce noted that the IPCPR—with its last three letters being CPR—often faced confusion in meetings with representatives in Congress and in the various state legislatures that thought they were meeting with a medical association. IPCPR representatives often had to spend valuable time explaining to regulatory and policy officials the association’s purpose as a tobacco lobbying organization, thus losing opportunities to forward the defense of the premium cigar industry against U.S. Food and Drug Administration (FDA) oversight and other legislative initiatives harmful to the industry.

Engaging with public relations and branding professionals, as well as polling numerous manufacturer and retailer members, the organization chose “Premium Cigar Association (PCA)” as its new name in the hopes that it would better explain its mission to both its members and those outside the industry—especially consumers and government officials. The name was also chosen because it is both simple and straightforward. In addition to the new name, the PCA is also adopting a new logo, replacing the time-honored logo that features a Native American holding a bundle of cigars with a simple tobacco leaf rendered in three colors—green, brown and gray—which represent the lifecycle of a tobacco leaf. Green represents the tobacco growing in the fields; brown represents the cured, fermented and aged tobacco that is rolled into cigars; and gray represents the ash that is produced when tobacco is smoked and enjoyed.

“The political and regulatory landscape has changed tremendously,” Pearce explained. “The new universe demands that we as an organization and an industry start going forward with a forward-thinking approach that doesn’t solve the problems of today or of yesterday but really provides us with an absolute platform in order to solve the problems going into the future—because unless we start doing that, we won’t be able to plan out a trajectory of growth or sustainable growth in the industry for the next 10, 15 or 20 years. We’re always going to be reactive.”

Increasing Value
From its founding in 1933 as the Retail Tobacco Dealers of America (RTDA) to its 2007 renaming to the IPCPR to this year’s rebranding to the PCA, the organization has continuously served to protect the premium cigar and pipe industry on both the federal and state levels and has served as a resource to educate its members on the ways that they can best improve their businesses. With the announcement that the organization would be changing its name to the PCA, Pearce also outlined some of its plans to improve its service to all of its members.

Pearce noted that the PCA’s lobbying efforts include representation at every state legislature and that the organization averages 30 visits to Capitol Hill every month. To improve its ability to protect the premium cigar and pipe industry, the PCA plans to launch a foundation in August that will research pipes and cigars for information that could be used in its proactive legislative fight. Pearce also announced that the PCA will be hosting an event with the Congressional Black Caucus on Sept. 5—the first time the organization will formally meet with the group of African-American legislators. In November, the PCA will host a casino night event to raise funds for its political action committee.

The PCA will also host a series of educational events, including an October workshop at the PCA’s headquarters in Washington, D.C., and another workshop in Dallas, Texas, in 2020. In April 2020, the PCA plans to launch an online learning portal that will bring together information from the IPCPR’s multiple websites and include information on legislative issues as well as tips on best business practices. The organization also launched its own magazine—PCA The Magazine—which debuted at the show. In September, the PCA will debut its new website, which will feature industry news, a blog, business resources, white papers and a business solutions center.

“We want our stories and our advocacy to reverberate and echo in the halls of every state capitol—your stories of small business, what you do for your community, how you give back to the communities, and the jobs and taxes that you pay are all critical. It’s all stories that move the needle,” said Pearce.

CigarCon
While renaming the organization to PCA and announcing plans to modernize the PCA’s approach to defending the industry against legislative attacks and improving its educational value to members through new assets is quite an ambitious platform of changes, Pearce also announced plans to open up the organization to consumer membership and offered insights into CigarCon, a one-day event at the trade show that will welcome consumers onto the trade show floor beginning at the 2020 PCA show.