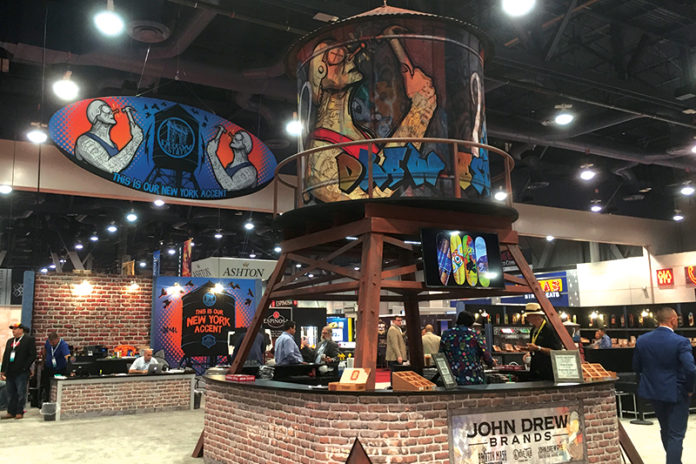 Whenever speaking of Drew Estate, I often sum up the company and what it does as “expect the unexpected.” Drew Estate has made it its mission to disrupt the industry and has never tried to “fit in” with the other cigar companies but has always, in the end, shown great respect and understanding of the art and lifestyle surrounding cigars.

IPCPR 2017 was a bit of a re-launch of Drew Estate. Months ago, Jonathan Drew returned to the reigns of the company to serve as its President; it’s shaken down its sales department to better serve its customers; it’s turned its retailer loyalty program Drew Diplomat into an interactive community and experience for consumers; it’s even starting to cross promote and expand its focus to touch the spirits column. While some may see Drew Estate as the mavericks of the industry, they’d be wise to take note and figure out why it and its leader has such a loyal and broad following.

Drew Estate, perhaps only rivaled by General Cigar, managed to have and onslaught of new products to showcase at IPCPR 2017. To signify the change that’s been sweeping through the company and its brands, the iconic bridge that people have come to expect at each trade show was noticeably gone. In its place was tall and eye-catching water tower, which figures into one of it’s big releases this year. Situated at the center of the booth, the water tower was also where you could quench your thirst with a taste of Jonathan Drew’s new spirit products [more to come on that later]. This year’s releases ranged from a Florida-inspired cigar to the company’s most popular cigars being released in convenient tins. Here’s what Drew Estate showcased during IPCPR 2017:

4×32 Tins
The best place to start is with the main attraction in the booth–the water tower. What is it about and why is it so important that the company ditched its iconic bridge? The company wanted to compete in the 4×32 segment so its packaged some of its most popular cigars in 10-count tins. Cigar enthusiasts will be able to enjoy 4×32 versions of ACID Krush, Herrera Estelí, Liga Privada, Undercrown Shade, Tabak Especial, Kentucky Fire Cured and Larutan in 10-count tins. To help push these products, retailers can take part in a special incentive program and they can also buy an attractive water tower display for their own store.

Florida Sun Grown (FSG)
Drew Estate’s teamed up with Jeff Borysiewicz, owner of Corona Cigar Co., for a special cigar line–Florida Sun Grown (FSG). At the show, we learned that in the past, Florida was one of the biggest producers of tobacco in the United States. Borysiewicz wanted to reignite that market so began growing tobacco in Florida and now Drew Estate is using some of it for its latest cigar line, the FSG.