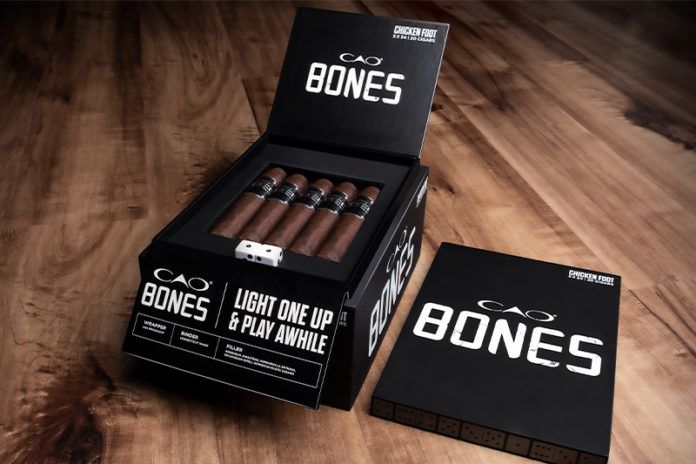 General Cigars has announced the upcoming release of CAO Bones, a cigar inspired by dominoes and dice, a combination that pairs well with a cigar in hand and in the company of friends, both old and new.

In a press release, Rick Rodriguez, CAO’s blender and brand ambassador, commented on the new release: “Bones is about kicking back with your friends with a cold beer in your hand, playing a game, smoking, grilling, talking a little trash, and having the time of your life. And that’s what CAO is about, too. It’s about being yourself, enjoying the people you’re with and not having a care in the world while you’re having your cigar. Most of us need a break right now and Bones is just the cigar for that.”

Rodriguez and the Nicaraguan-based CAO blending team set out to make a medium to full-bodied smoke that would complement a wide range of spirits that pair well with handmade cigars. CAO Bones features a four-year-old Connecticut Broadleaf wrapper over a Connecticut Shade binder. The blend also is comprised of two varieties of Honduran tobacco from Jamastran and La Estrada, along with Nicaraguan Estelí and Dominican Piloto Cubanao. CAO Bones is described as a meaty smoke that delivers bold notes of wood, nuts and vanilla.