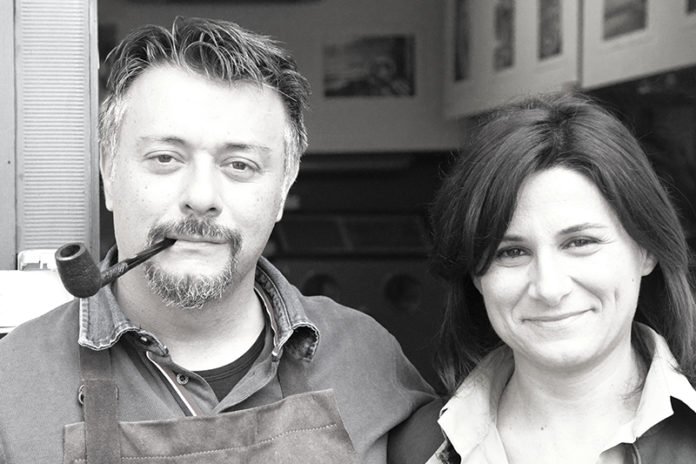 For Cristian and Cinzia Galeazzi, making pipes is much more than just artisanship—it is a meditative journey in which they discover the secrets that each briar block holds and then unlock them for the rest of the world to enjoy in their Regina Scarlatta pipes. For the Galeazzis, making pipes is a ritualistic experience that allows the pair to slow down from their fast-paced 21st century lives and commune with nature. Pipemaking is an act of collaboration for them. They take briar, which has been affected by hundreds of years of exposure to climate and soil conditions, and draw out its most beautiful elements to create their pipes, which exhibit a combination of traditional craftsmanship and modern aesthetics.

Every Regina Scarlatta pipe serves as an intersection of traditional motifs and modern sensibilities. The amalgamation of this tradition and art often results in pipes with slender and carefully defined lines. Even Regina Scarlatta’s classic shapes tend to be sinuous, lithe and graceful, and the couple uses the briar’s grain to inform each pipe’s ultimate shape. These light pipes rest comfortably both in the mouth and in the hand, and many pipe smokers will enjoy looking at the beautiful finishes that often accentuate the depth of the briar’s beauty as much as they relish a Regina Scarlatta’s shape and technical superiority. 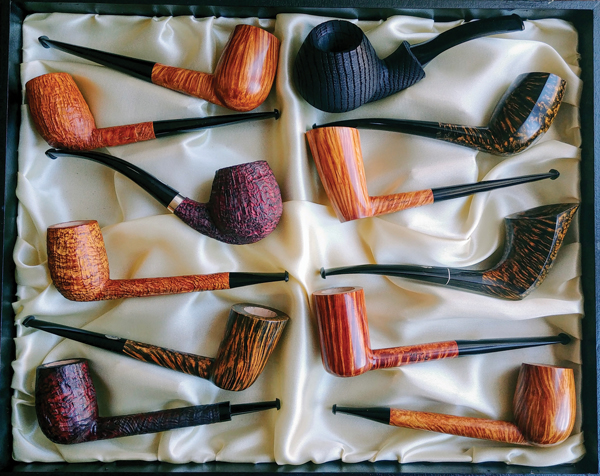 “Regina Scarlatta pipes are a touch of femininity in a traditionally male-
dominated universe,” says Cristian. “For me, a pipe is like a woman. She [a pipe] is elegant, sensuous and delicate, and mirrors a beautiful woman in looks and manner. That is why we named our brand Regina Scarlatta. ‘Regina’ is Italian for ‘queen,’ and ‘Scarlatta’ means ‘fire’ or ‘passion.’ Pipes are that for me—they are my passion. Our pipes are fine and not heavy. Cinzia and I try to make every pipe as elegant as possible.”

Discovering Elegance
While Cristian has worked with installing or designing specialized woodworking equipment, he longed to have a closer connection to wood. In 2008, while clearing out some of his father’s boxes, Cristian discovered an Il Ceppo pipe that his father used to enjoy. Looking at the pipe, Cristian admired its beauty and craftsmanship and wanted to meet Franco Rossi, the man who makes Il Ceppo pipes, and learn to make pipes himself.

After his career as a professional soccer player, Rossi started building pipes as an employee at Mastro de Paja. A no-nonsense and sometimes gruff individual, Rossi might have easily rebuffed Cristian if it weren’t for the younger man’s intense interest in learning the pipemaking trade and his previous experience working with wood and his understanding of the importance of precision engineering. An unlikely but real friendship developed between the two men, and Cristian was soon spending evenings and weekends at the Il Ceppo workshop learning each of the steps that go into making a pipe.

“Franco is my friend, and he is my teacher,” Cristian explains. “He is a very nice man who patiently taught me everything I needed to know about making pipes. From him, I learned all the steps and mastered them enough so that I could then begin developing my own style. I also learned from Tom Eltang, watching his contrast finishing technique in Neatpipes’ workshop held in Milan several years ago, and I learned from Paulo Becker about improving and making the connection between the mortise and tenon on my pipes thinner. Three years after beginning to work with Franco, I was ready to establish my own pipe company.”

Establishing the Brand
Since 2011, Cristian and Cinzia have been crafting Regina Scarlatta pipes. Both have kept their other jobs making pipes part-time—Cristian works six hours a day with the company that originally hired him, and Cinzia works three days a week at a local government office. Cristian determines the best shape that each briar block has to offer, then shapes it and drills the tobacco chamber and smoke channel. Cinzia conceptualizes potential designs and refines Cristian’s rough shaping using the sanding disk. She chooses the colors and finishes of every pipe, and she takes care of the company’s commercial and administrative needs.

“She is the smartest person I have ever met, and I have met a lot of people,” Cristian proudly says of his wife.

Being located in one of Italy’s pipemaking capitals amid so many other pipemakers, it would be easy for the Galeazzis to have their own shapes influenced by the works of their peers, but since founding Regina Scarlatta, the couple has made conscious efforts to develop their own style that falls outside of the typical Pesaro pipe.

“I come from the Pesaro pipemaking school, and it has particular characteristics, which typically makes bigger and heavier pipes,” Cristian explains. “The biggest problem for me is to come out of the Pesaro school of shapes. When you learn something, you are used to making it that way, but I want to make something different. Your mind thinks of making something different, but your hands make it the same way you have always made it. For that reason, I have put a lot of energy into breaking out of the Pesaro school of pipe design and focus on making pipes that are light and elegant. Silhouette and the lines are our target. The connection between the stem and the bowl and making that flow seamlessly so that they look like they are one part instead of two. These are our goals.”