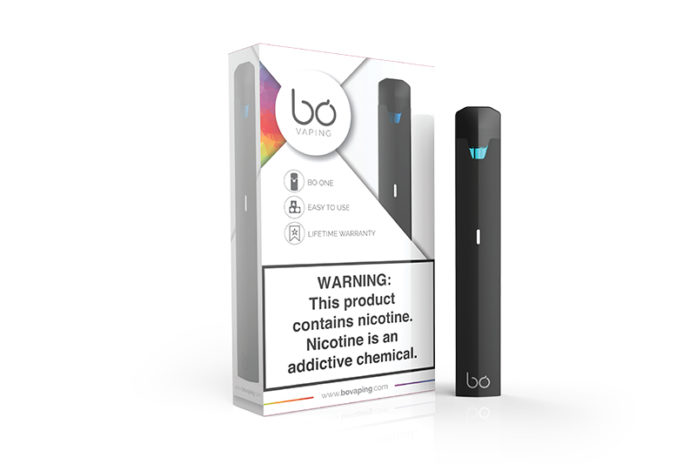 Designed to be smaller and easier to use than the “box-style” designs currently on the market, Bo Vaping’s closed-system device seemed like the perfect fit for the U.S. market, where vapers have found many of the available systems to be too cumbersome and complex. And it was—except that manufacturing issues caused the batch of products brought to the U.S. in 2016 to be plagued with problems, including leaky pods that appeared to be discolored or burned.

To remedy the problem, JWell, the company that makes the product, needed to reconfigure the manufacturing process to address those issues. “Our innovative pod is now leakproof and sure to wow former Bo users back into the fold,” says a company spokesperson, who notes that key features of the pod include a strong battery life, a 15-minute charge time, temperature control that promotes consistency, and a sleek and sophisticated design. Bo Vaping has always taken great pride in their superior devices.”

The company remains committed to pods, which it sees as the right option for convenience-minded American consumers seeking a portable, easy-to-use device. “We feel that our strong consumer base prefers not to fill their own pods,” says the spokesperson. “They are looking for something a little more user-friendly, so to speak.”

Bo pods, which are available in single-pod packs, come in four flavors, including Butterscotch Tobacco, Melon, Gold Tobacco and Icy Mint. “They will still be the same 1.6 mL size and compatible with our original device design, but now we offer consumers the option to try all flavors without having to buy multiple,” says the spokesperson, who added that the company currently offers only a 5 percent nicotine concentration. “But keep an eye out, as we have lower levels making their way back to market shortly.”

To make sure consumers recognize the new, improved Bo, JWell also redesigned the company’s packaging, choosing a white background and black lettering for a sleek and streamlined look. “It will be more eye-catching in stores, and the smaller display will take up one-fourth the space it used to,” says the spokesperson. With the single-pod pack, we had simplicity in mind.” In fact, the brand’s motto is: “Bo. Just Simple.”