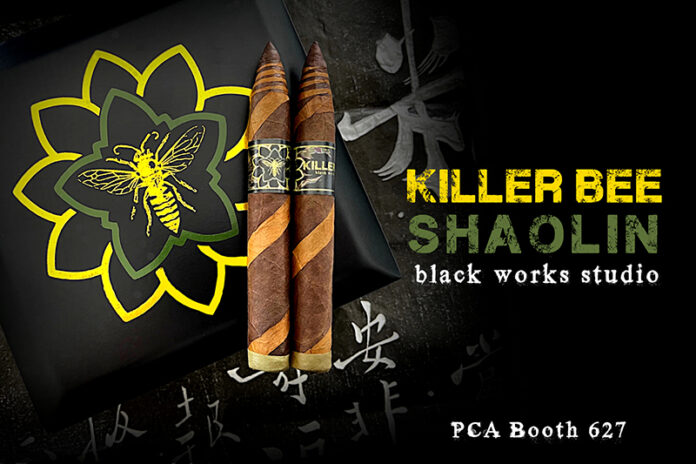 Black Works Studio has a new release slated to debut at this year’s Premium Cigar Association (PCA) trade show. Killer Bee Shaolin is described as a small batch release that will be offered on a first-come, first-served basis to Black Label Trading Company and Black Works Studio retailers.

“The Killer Bee line is in a constant state of evolution. It lends itself to a lot of different variations and the next one in line is the Shaolin,” says James Brown, creator of Black Label Trading Company, Black Works Studio and a partner at Fabrica Oveja Negra. “The Shaolin is a slightly tweaked version of the Killer Bee blend wrapped in a mix of Mexican San Andres, Connecticut, and Candela. The result is a bold but elegant cigar that has layers of complexity.”

Killer Bee Shaolin is a Nicaraguan cigar with a Mexican San Andrés, Connecticut, and Candela wrapper, a Honduran Habano binder and filler tobaccos grown in Nicaragua. It is presented as a 5 1/2 x 46 Belicoso and comes in 24-count boxes. Each cigar has an MSRP of $13.50. The cigar is expected to ship this summer to retailers.

For all the latest news from Black Works Studio and other Fabrica Oveja Negra brands, visit ovejanegracigars.com.