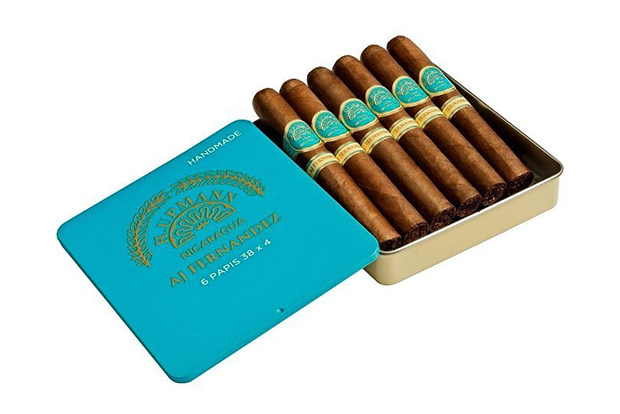 Fans of Altadis U.S.A.’s H. Upmann Nicaragua by A.J. Fernandez, rejoice! There’s a new smaller, convenient format of the popular cigar line coming to a tobacconist near you. The company has announced that it will introduce a mini version of the cigar in a 4 x 38 format by mid-June 2019.

The original H. Upmann Nicaragua by A.J. Fernandez was introduced in 2017 and this new format is made for those cigar smokers looking for a handmade premium cigar in a convenient, smaller format that can be enjoyed and smoke in a shorter amount of time than the original formats released. This smaller format is named “Papi”, a term of endearment that’s frequently used by the cigar’s master blender, A.J. Fernandez, for those close to him.

This tin-format cigar is handmade at Tabacalera Fernandez located in Estelí, Nicaragua. Just like the 2017 version, H. Upmann Nicaragua by A.J. Fernandez “Papi” will have the same blend as the original vitolas–an Ecuadorian Sumatra wrapper, dressed over a Nicaraguan Corojo 99 binder, with Nicaraguan Criollo 98/Dominican Piloto Cubano filler tobaccos.