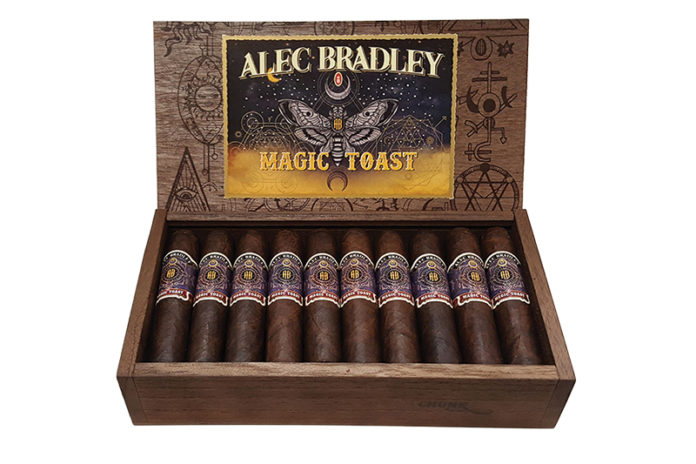 Alec Bradley Cigar Co. is expanding its popular Magic Toast cigar line with the addition of a new 4 1/2 x 60 ring gauge cigar called the “Chunk.” This will be a permanent extension.

Magic Toast was first introduced during the 2018 International Premium Cigar & Pipe Retailers Association (IPCPR) trade show and convention. At launch, the company rolled out a Robusto, Toro and Gordo vitola for the initial global release. The cigar features filler tobaccos from Honduras and Nicaragua, has a double binder (one Nicaraguan, the other Honduran), and a silky smooth dark natural wrapper from Honduras.

The company reveals that Magic Toast’s origin story goes back to when founder Alan Rubin was taken to a new tobacco field immediately after arriving to Central America. At dusk, with he held from pickup truck headlights, he saw the new crop and knew it was something special. Rubin grabbed a bottle of scotch from the truck and proposed a toast. Rubin and his business partners referred to the crop as being magical. When it came time to name the cigars that featured tobacco from that field, Rubin settled on the name “Magic Toast.”