“Marketing has always been in my blood,” Austin explains. “Street art is synonymous with marketing and branding—that’s essentially what it is. You’re always trying to elevate your brand, position it for big visibility and get as many impressions as possible. Then, and even more so today, you try to commercialize it. So I think it has been in me naturally from early on, and it just kind of evolved from there. In terms of ambitions [for] a profession, I’ve always wanted to ‘do things’ more so than be something. In many cases, the journey can be equally valuable or more valuable than the result or destination. I’m a firm believer in this.”

Austin didn’t have his first experience with cigars until he was 18 years old during a trip to Paris. While exploring the streets of the city alongside his mother, he decided to let his rebellious tendencies play out by walking into a cigar store that he encountered, a move that was completely against the grain for someone his age. He walked into the store and purchased a Cohiba Siglo V that he smoked while strolling through the Montparnasse area of France. This rebellious act served its purpose: His mother was not happy with this act while he certainly felt satisfied. Austin made a return trip to this same cigar store as an adult while visiting Paris in 2019.

That early rebellious act played out several years before Austin would find himself yet again confronted with the opportunities presented by cigars. While on a yearlong hiatus following the completion of a number of consulting projects, a friend of a friend put him in touch with Selim Hanono, who was working with premium cigar brand Camacho at the time. Austin interviewed with Hanono, presenting what he felt were great examples of his marketing work and potential. Hanono, on the other hand, felt differently and offered criticism as he ripped on Austin’s work, surprising the young marketer at the time.

“I remember walking out of that interview thinking it went horrible. A few days later, I received a call, then the job offer. It was surreal. Selim and I still laugh at it today,” Austin shares.

Working with Camacho and learning the ins and outs of the cigar industry was more of a lesson in what not to do, Austin says jokingly. “It was my first foray into the business after consulting for many years, and I was anxious to make an impact. What I really didn’t know was how tough it was from a marketing standpoint. Around that time, there was one company marketing their brands really well. That was CAO, when Jon Huber was there. Aside from what they did, it seemed the majority of the industry was resistant to marketing, which made things tougher than I expected.” 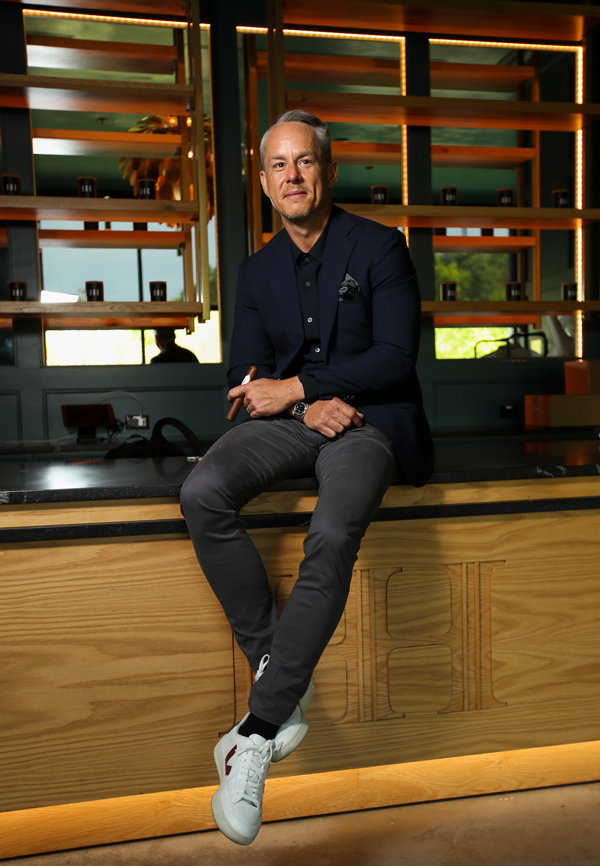 It took some time for Austin to understand how he would be able to make his mark on the Camacho brand and cigar industry. As he began to craft his own marketing and branding plans for this niche industry and product, Austin recalled all of the people that he had found to be inspiring to him over his lifetime. Austin reveals that he’s had a number of people from different walks of life and professional backgrounds that have had a significant impact on his life and career. One mentor taught him the valuable business lesson of, “Do the right thing, even if what you have to do is tough and unpopular.” Another mentor of Austin’s was former Camacho Cigars executive Sal Fontana, who taught him to always strive for more and to be and do better.

“Many people in this industry who were close to him [Sal] will echo the same thing: Sal was wise as could be and absolutely had no filter,” says Austin. “If he liked you, he’d criticize every little thing you did until he was done with saying what he had to say. But, at the same time, you knew his intent was genuine and what he said had real logic.”

Austin still applies some of the lessons he learned from Fontana and other mentors to his current leadership role at Davidoff. One thing has become abundantly clear to Austin as his career continues to take shape: Mentorship and inspiration are two things that will constantly evolve as life goes on.

This story first appeared in the May/June 2021 issue of Tobacco Business magazine. Members of the tobacco industry are eligible for a complimentary subscription to our magazine. Click here for details.

– Photography by Dirk Shadd. Story by Antoine Reid, senior editor and digital director for Tobacco Business Magazine. You can follow him on Instagram @editor.reid.