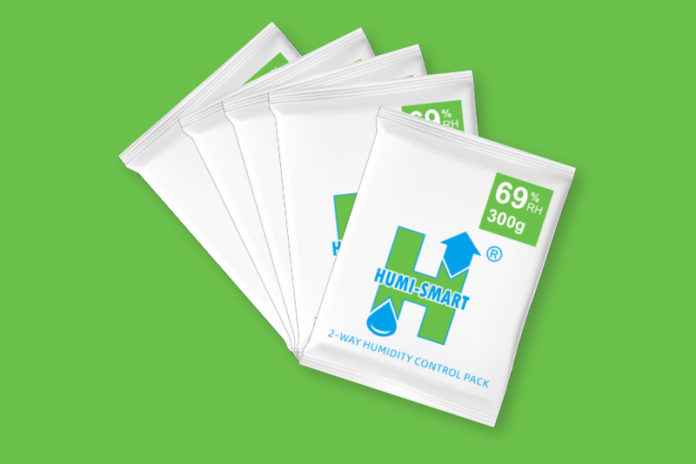 There’s a saying that goes, “Necessity is the mother of invention.” In the case of Humi-Smart, it was the limited availability of a needed product that sparked the idea for a new business. About three years ago, Humi-Smart’s ownership team was working on a new tobacco business that required two-way humidity control. The team found that, although there were products that could help control humidity already on the market, those products were very limited in quantity, and it was difficult getting through to those companies’ customer service representatives to secure the needed humidity control product. With inventory in short supply and concerns about the quality of what was available, the team came up with an idea: Instead of waiting for the product they needed, why not create their own?

“Humi-Smart was born because we needed it,” explains Brian Berken, managing partner at Humi-Smart. “Our group didn’t start out specifically interested in humidity control or on a journey to invent a totally new method. We started out with a need for a small two-way humidity control packet that would add or reduce moisture levels and stumbled into an enormous market need for a different and better option.”

Because the ownership group at Humi-Smart also owns and operates businesses in other consumer and commercial industries, starting a new business meant it needed to expand its team. The group hired specialty chemists and those with experience in the tobacco industry to help the company create a humidity control product that would be different from what was already available on the market. Taking a methodological and purposeful approach to product development, the team was able to create something it felt was new rather than a product that would be viewed as simply being “good enough.”

Dozens of ideas and several early iterations were developed through hard work, extreme dedication and exceptional imagination. Early on in the process, the biggest challenge to the business was actually finding the appropriate workspace necessary to allow the business to grow and expand. For months, the ownership team was running multiple businesses in one space that quickly became filled with all of the raw materials needed for the humidity control products, including samples and eventually boxes full of the final product. While the lack of space may have been an issue initially, in retrospect, Berken refers to his business’s early challenge as being a “great start.”

The key to the company’s early success has been its ability to clearly identify its team’s expertise and building on that with the addition of other experts that would not only enhance the company’s knowledge base but also complement the skills that were already present. The ownership group behind Humi-Smart had experience and success in business management, development, marketing and sales, but it lacked knowledge of humidity control and tobacco. In order to achieve real success in this market, Humi-Smart’s ownership team was going to need to surround itself with the expertise and skills its founders lacked.

Building on the Expertise
Humi-Smart’s team had casual interests in the tobacco industry long before they had a physical product to promote. In particular, different partners behind the humidity product had interests in cigars, though none would refer to themselves as being aficionados. Instead, they were cigar enthusiasts who would occasionally smoke one in their leisure time. Knowing they personally had a lot to learn about tobacco and cigars, the group also knew that their company’s success would hinge on bringing in experts who knew far more about the market and industry that they would be based in. Though its team has what Berken refers to as an excellent base of knowledge, the team as a whole continues to learn and grow each day with the goal of focusing on the needs of its customers and becoming strong partners for other tobacco businesses.

Advancing its knowledge is key to Humi-Smart’s overall development and growth plan. “We have been disciplined and precise about every step from when we started until today. We developed what we truly believe is a different and better product. It looks different, it feels different, and it is truly different. We hired people with diverse and expert backgrounds in every field from research and development to manufacturing, customer service, marketing and sales. We intentionally and purposely started with the strongest foundation we could find, so as we grew, the parts would grow and work together,” Berken explains.

After years of development, Humi-Smart had a soft launch in August 2019, although it took until Jan. 1, 2020, for the product to begin to be distributed nationally. The COVID-19 pandemic threatened the rollout of the product last year, but it hasn’t hindered the growth of the company. In the span of the past year, Humi-Smart has been forced to move into a new office space and also expand its warehouse space to accommodate the growing demand as cigar consumption increases with the pandemic.

During the past year, Humi-Smart has also leveraged its social media accounts to increase brand awareness. Instagram, Facebook and appearances on different podcasts have all helped the new business to gain traction in new markets outside of the U.S., including Canada, the United Kingdom, the European Union, Asia and Australia. Humi-Smart has also managed to get its products on Amazon, eBay, and in Walmart, as well as several smaller online retailers. 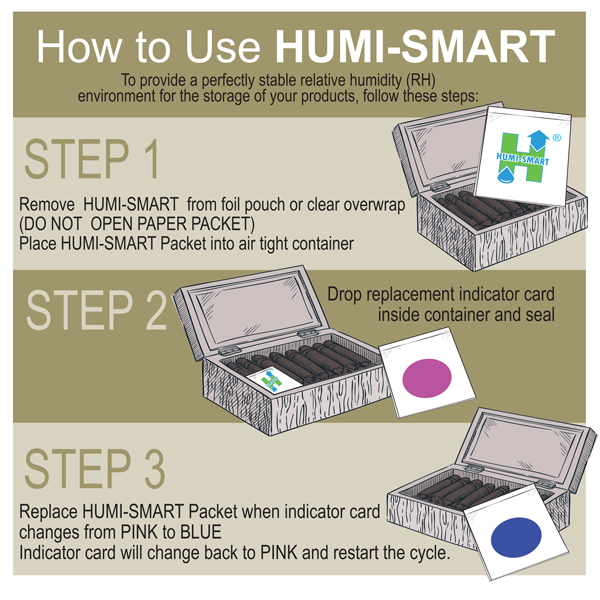 How retailers, manufacturers and consumers can use Humi-Smart packs to maintain the quality of their cigars is simple: Add a Humi-Smart pack in with your product in an airtight container, such as a humidor or jar, and the pack immediately begins to control the humidity level of that container to the benefit of your products. This is accomplished by each pack’s ability to control the humidity level by either adding or removing moisture to achieve the relative humidity (RH) level noted on the pack.

The contents of each Humi-Smart pack do all of the hard work. Within each package is a highly proficient humidity buffering agent that is individually processed and combined with an all-natural plant fiber immersed in a solution that is blended with different types of organic polymers that is then dried to an exact moisture content that produces a stabilized humidity level as noted on the pack. Each Humi-Smart pack also comes with a humidity indicator card that is included with the packs. When the card turns from its pinkish color to blue, it’s time to replace the pack.

“Again, we wanted to be different, so we designed our product in a way so you’re not forced to open your humidor or jar to check your pack,” says Berken. “The humidity indicator card is another simple way of knowing when it’s time to swap your pack for a new fresh Humi-Smart pack.”

For those that prefer to check the pack rather than rely on the card, it’s easy to figure out when it’s time to change the pack. If the pack feels firm or bumpy, it’s time to change it out for a new pack. When asked what makes Humi-Smart different from other products that deal with two-way humidity control, Berken provided a laundry list of the product’s highlights: it’s all natural, it’s plant-based, and it’s earth-friendly. Humi-Smart contains no preservatives or corrosive salts, and Humi-Smart packs will not spill or leak. Berken also added that Humi-Smart is stable, accurate in its control of humidity, experiences fewer fluctuations than other products, and that it will not change the flavor of premium cigars that are stored with it.